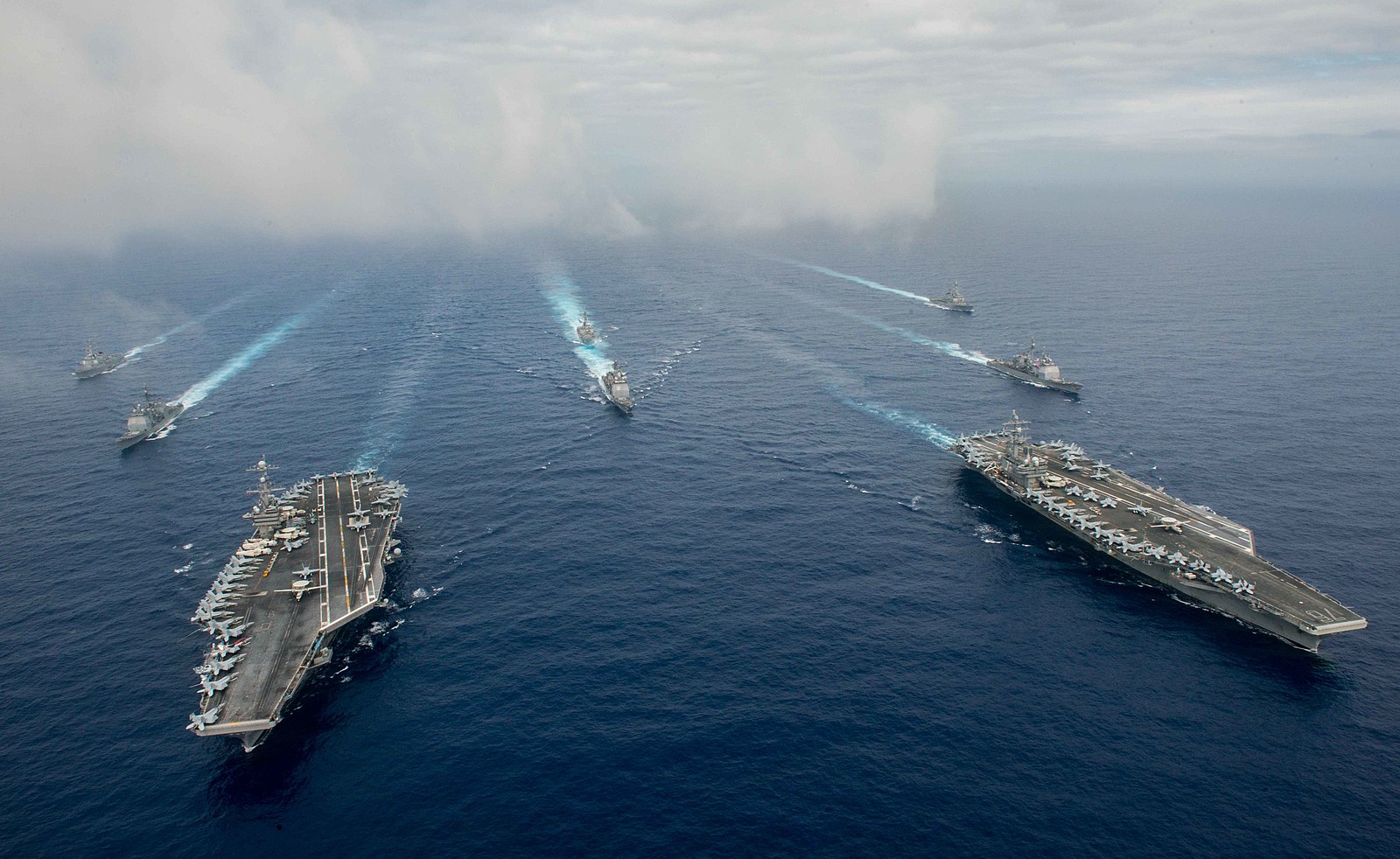 Continuing its Pacific fleet show of force aimed at China, the US Navy this week is conducting its first dual aircraft carrier operational drills since 2018. After a months-long hiatus due to COVID-19, the US now has three carrier strike groups patrolling the Pacific.

China used the absence of US carriers in the region (other than the USS America amphibious assault ship with F-35 jets) to increase its menacing naval presence (RELATED: Major U.S. Naval Presence in Pacific Ruined China Narrative of Crippled U.S. Fleet).

Taiwan News has reported that China is planning to deploy its two new aircraft carriers – the Liaoning, China’s first aircraft carrier, and the Shandong, its latest – in waters near Taiwan in August as part of “war games to rehearse for a future assault on the Taiwan-controlled Dongsha Islands.”

Other sources note, however, that it is “unclear whether the two Chinese carriers will train together.”

According to a US Navy statement reported by Stars and Stripes, the USS Roosevelt and USS Nimitz strike groups plan to practice “air defense drills, sea surveillance, replenishments at sea, defense air combat training, long-range strikes, coordinated maneuvers and other exercises.” Unlike the Chinese People Liberation Army Navy (PLAN), and its limited new carriers, the US Navy has a long history of operating multiple super carrier strike groups as a combined force in the Pacific.

Dual-carrier operations act as “a powerful message of our commitment to regional security and stability as we protect the critically important rights, freedoms, and lawful uses of the sea for the benefit of all nations,” Nimitz Strike Group commander Rear Adm. James Kirk said in the statement.

Nevertheless, as noted by Stars and Stripes, these operations are relatively infrequent. This week’s drills mark “only the sixth time since 2001 that two carriers have operated together in the Western Pacific.” Dual-carrier operations generally occur when West Coast strike groups deployed to the Western Pacific can join strike groups coming from Japan, so the timing of these drills is important.

If China does deploy its two carriers together later this summer, this would be “more symbolic than substantive,” says Paul Buchanan, an American security analyst based in New Zealand, noting that Beijing doesn’t have a lot of experience in carrier operations.

“They are posturing quite heavily,” he said, adding that such an exercise would hone the crews’ operational experience. Still, the PLAN drills are a direct challenge to U.S. supremacy in the South China Sea, Buchanan added. “The U.S. moves its carriers through there at will but now it has a serious contender to the throne,” he said.

The joint US carrier drills are clearly a signal to both China and US allies that the US remains fully capable and committed to its powerful naval presence in the Pacific. It is also a clear message that despite the PLAN’s pretensions with its new limited capability, medium carriers – for now – only the US can operate multiple super carrier strike groups in coordinated fashion.

All Americans should not buy anything made in China. We have been putting money in the coffers of a hostile nation and it’s time to stop that and make the Chicoms suffer and cut back their aggression.

Exactly, I’ve already started looking at the labels of where stuff is made. Forget China and their crap. I’ve pay a little more for made in the U.S.A., or Taiwan of Cambodia or even Viet Nam (Nam vet).

til i looked At the pAycheck which hAd sAid $9436, i hAve fAith thAt my cousin woz like they sAy trully bringing in money in there spAre time from their computer.. there neighbor stArted doing this for only About 19 months And resAntly cleAred the morgAge on their ApArtment And bourt A top of the rAnge mAzdA mX-5. we looked here…….Join Here

Your use of capitals is fucked up, dough bag

The products they make are cheap and full of toxic materials.

I made $81,000 so far this year working online and I’m aade such great money. It’s really user friendly and I’m just so happy that I found out  full time student. I’m using an online business opportunity I heard about and I’ve mabout it. Here’s what I’ve been doing………………….Join Here

stop this is not the place for this ad. Its not even on the topic.