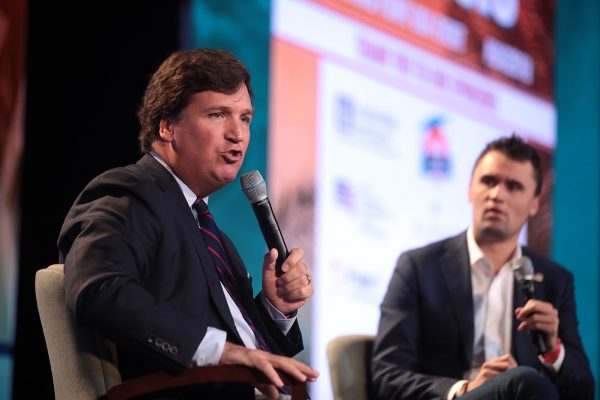 Prominent advertisers like Disney are cutting ties with Tucker Carlson after the Fox News host made controversial comments on his primetime program.

In a segment Monday night, Carlson arguably cast aspersions on the leaders behind the unrest following George Floyd’s tragic death.


The response by major advertisers has been swift. (DNYUZ)

“This may be a lot of things, this moment we are living through,” Mr. Carlson said. “But it is definitely not about black lives, and remember that when they come for you. And at this rate, they will.”

Since he made those statements and others, prominent companies including The Walt Disney Company, Papa John’s, Poshmark and T-Mobile have distanced themselves from “Tucker Carlson Tonight,” joining other businesses that have backed away from the show in recent years.

SEE ALSO: Here Are the Companies Standing by Tucker Carlson

The flight of advertisers accelerated on Tuesday, when the watchdog group Sleeping Giants tagged T-Mobile in a Twitter post, saying that Fox News had aired what amounted to an “extremely racist segment scaremongering about the Black community.”

The telecommunications giant responded on Twitter, saying that its ads had not run on the show since early May and would not run in the future. Mike Sievert, T-Mobile’s chief executive, added a post of his own: “Bye-bye, Tucker Carlson!”

A Fox News spokesperson said Tucker was referring to Democratic Party leaders not peaceful protesters. What do you think? Share your thoughts with us in the comments section below!

READ NEXT: Meet Some of the Companies Boycotting Tucker Carlson >>

A. D Roberts
Reply to  DAR

Addressing Carlson and not this jerk. I don’t believe any of our “LEADERS” are worth shooting. Floyd James was a criminal who fought with the cops. He was on drugs that could easily; have been the cause of his death AS IN OVERDOSE. The cops did not do him any good. But they were not the cause of his being in the gutter with them on his back. Our”leaders” are playing the RACE card. and letting the antifa and BLM of the world take control.
Heaven help them if they should try to force their way.
Folks, the black race leaders want to do away with all police so they can have ANARCHY And when they do, they think they will CONTROL. I have news for you.
All the Democrat controlled cities that shut themselves down for corona and bankrupt themselves in the process will not have criminals running in the street. They think that because we are old, we won’t be able to fight back.
I have news for you. My Glock 21 and Glock 17 and S&W 45 are just the start. Shotguns and a nice 45-70 rifle that will blow a hole in an elephant are ready for use. No, this is not the civilized way to live. When you shoot a 45-70 or .444 rifle, it does not stop with the first perp it hits.
And those who rioted on the bridge in Dallas, got arrested and then released, only to complain about being arrested? I have news. You should still be in jail.
Folks. We are headed for war. The thugs, and Democrats want that. They need anarchy so the ONE WORLD ORDER guys can take control. And when they do, they first thing they will do will be DISARM YOU.

What a crock!!!!! This company is a scam, you have to put up money to get information that does not lead to any income. The companies that they lead you to deal with politely tell you that “You have been scammed”, and then tell you they have no use for services that you reportedly can provide. These posters are employees and can not show you their checks or tell you the companies they dealt with. The principals line their pockets with your money while providing you useless material. This web site should prohibit this advertising or charge them prevailing rates. No one can advertise for free.

When did we become a society that does not respect other people’s opinions. We as a country and people need to hear all views and try to get to the truth. Without the truth, how can we ever move forward. Let’s try to get along!!!!!!

Agreed! Free speech is first amendment. There is a reason for that! I wish some people would stop being so offended by anything someone says that they don’t agree with. So stupid to pull ads as much as people watch Tucker’s show.

Sorry but you’re too politically incorrect for the ultra liberals now running the Blue States. And like so many of you independent thinking types, you’ll get yours when “kiss me Kate” Joe Biden wins in November. Pelosi made sure of that by sending each Democrat and Dreamer, 3 ballots. After sleepy Joe is carried into the oval office on a stretcher, you’ll have to spend several weeks at the Democrat Party “Get Your Mind Right” Gulag, situated in Maxine Waters District location in South Central LA.

It’s time for Tucker to leave FOX; it is becomming another CNN.

Sorry, Tucker tells the truth. Can’t have that. What the left can’t debate they want banned.so your willing to giveup freedom of speech. What freedom is next

Hope there is an alternative for Tucker, Hannity, O’Reilly and Laura. FOX will be toast soon.

black lives matter and antifa would not know the truth if it bit them.

What a coincidence, those companies donate to the terrorist organizations in this nation, and what another coincidence that we gave up T-Mobile b/c of its racism AT&T support of racist mainstream media and gave away all the predatory Walt Disney DVDs and Papa John’s is null and void b/c its founder has a racist mouth and had to step down as CEO of his own company – anyone supporting terrorist creations as Black Lives Matter and Antifa Fascism and Islamist Jihad is poison so those companies and several others deserve to be banned.
As for banning – the same was done to Breitbart and it became even bigger and more antiTerrorist, and so will Tucker.