Indiana Attorney General Curtis Hill Is out to Save America 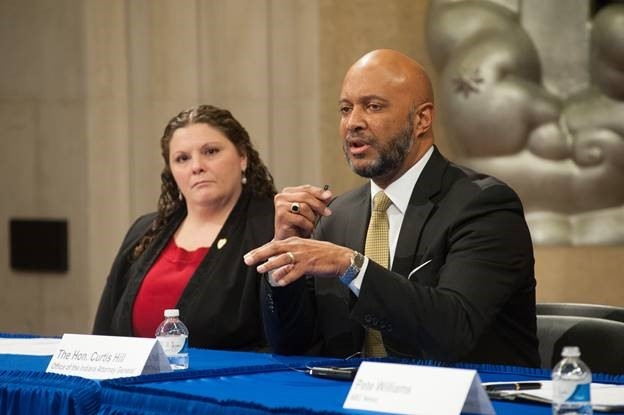 Wikimedia Commons, By Matt Nichols for the Department of Justice
| Jake Walker | Government | 5

As disorder and fear continue to grip America, due in no small part to the dangerous and radical policies and rhetoric used by the Democrat party, there seem to be vanishingly few candidates who are actually attempting to be a part of the solution instead of the problem.

But there are still some, and chief among them is Republican Indiana Attorney General Curtis Hill, who’s historic tenure as Indiana’s first black Attorney General has seen him fight for the values of average Americans and against the radical chaos promoted by the Democrat party.

Hill has recognized that police brutality can be a serious problem in some communities while also openly condemning lawlessness and rioting (Fox News):

And yet no amount of frustration can justify the random destruction of property nor injuries caused to others through violent rioting across the nation, including in my own state of Indiana.

Our Constitution guarantees the right to assemble and protest, but it does not condone anarchy, violence and lawlessness – crimes that must be put down quickly and decisively.

Hill has also gone on to blast the insane idea of ‘abolishing the police’ an initiative openly advocated for by many protestors and democrats for the insanity which it is (Fox News):

Some of the groups protesting to achieve racial justice have gained frightening traction pushing the idea that slashing police budgets nationwide would help create safer communities and more peaceful interactions between blacks and whites.

This is utter nonsense.

We are a nation that continues to grapple with violent crime. According to the FBI, for example, an estimated 16,214 people were murdered in the United States in 2018. If we had fewer police on our streets that tragic figure would be higher. And you can bet that criminals would commit more robberies, assaults, rapes, burglaries and other crimes as well if there was a smaller police presence on the streets.

Hill has distinguished himself as a fighter for Conservative values like supporting traditional family values and championing law and order.

You can learn more about Hill HERE.

I am making a suitable salary from home $8k-$10k/week , which is great, underneath a 12 months ago I was jobless in a terrible economy. I thank God each day I turned into blessed with these -instructions and now it is my obligation to pay it forward and proportion it with anybody…………………….Read More USA Jobs

Now mentioning a Republican Attorneey general who was suspended and had his law license removed is not very forth coming with facts whicha re not in entirety correct in any way, some things inserted if th article were never ssid by the man but put in in such a way to appear that Mills said them.

Robert, you are the one not very forthcoming with the facts.

First of all, like so many leftists you attack the person, rather than the substance of what was said.

Second your attack was purposeful deception that had little to do with reality. The fact is Mills has his law license. In 2018, he was accused of inappropriate behavior at a bar by four women. The state said it did not find enough evidence and declined to prosecute. But in a highly unusual move, the Indiana Supreme Court decided to slap him with a 30 day suspension of his license.

Now, even if these accusations were true, and it’s looking like we’ll never know, what does that have to do with the substance of what he said? Answer: Nothing. It’s just a lame attempt to discredit what was said without ever addressing what was said.

WOW… The Democrats Highly Praised and Supported Antifa / CHAZ anarchist mob that took over six blocks of downtown Seattle two weeks ago has: Armed, Built a Border Wall, Established Segregated Areas, Reported multiple rapes of white women and robbery (Reported to Police but Banned from responding by the group), Sexually assaulted a white Street Preacher, placed him a choke hold, put a knee on his neck (like Floyd) and threaten to deported him, actually Deported a Mexican Man, is Extorting $money from the White members by demanding all give the Black members $10 each as Initial Reparation and roaming bands of armed thugs, are demanding extortion money from businesses in the area to remain in operation. They’re calling it “protection money.” What a Democratic Anti-Fascist Utopian Community… Aye Robert?