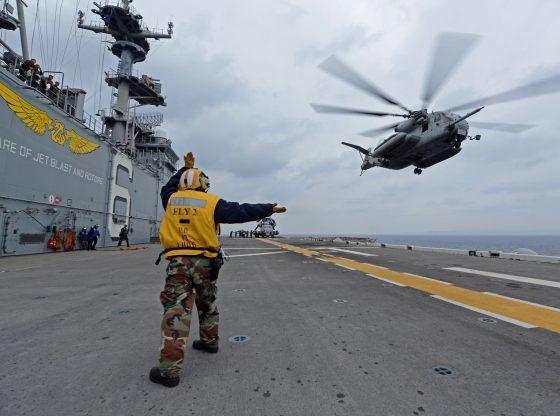 The U.S. Navy has decided to scrap the Wasp-class amphibious assault ship Bonhomme Richard (LHD-6 ) which was devastated by an in-port fire in San Diego this July apparently set by a disgruntled sailor/arsonist. The 22-year-old ship was ending a major $250 million refurbishing to enable it to carry F-35B stealth vertical/short take-off (V/STOL) jet fighters when it was consumed by a massive fire lasting several days.

After the fire, noted an official statement, the Navy completed an assessment that “concluded the cost to restore Bonhomme Richard could exceed $3 billion and require between five and seven years to complete.”  At least 60% of the ship would need to be replaced.


This was not considered cost-effective as a new America-class amphibious assault ship costs about $4.1 billion.

The Navy also considered rebuilding the ship as a hospital ship, submarine tender, or command vessel, but at a cost exceeding $1 billion, this was not justified compared to building a similar new ship.

According to the Navy statement:

We did not come to this decision lightly,” said Secretary of the Navy Kenneth J. Braithwaite. “Following an extensive material assessment in which various courses of action were considered and evaluated, we came to the conclusion that it is not fiscally responsible to restore her.

Although it saddens me that it is not cost effective to bring her back, I know this ship’s legacy will continue to live on through the brave men and women who fought so hard to save her, as well as the Sailors and Marines who served aboard her during her 22-year history,” Braithwaite said.

The Navy will now remove many systems and components for use in other ships. Investigations into the fire onboard LHD 6 remain ongoing.

As I explained in an earlier piece the loss of the Bonhomme Richard deals a blow to the Navy and Marine Corps’ plans to operate F-35Bs from amphibious assault ships.

As noted by Defense News, Bryan Clark, a retired submarine officer and senior fellow at the Hudson Institute said:

It’s a big problem, considering the F-35B is the Department of the Navy’s only fielded and deployable 5th Generation generation fighter. We will want those deployed most of the time.

Only half of [our 10 amphibious assault ships] are able to carry F-35B and the Marines are looking to reduce their land-based squadrons. So the loss of Bonhomme Richard will impact the Navy’s ability to provide Combatant Commanders sea-based F-35s not subject to host-nation approval.