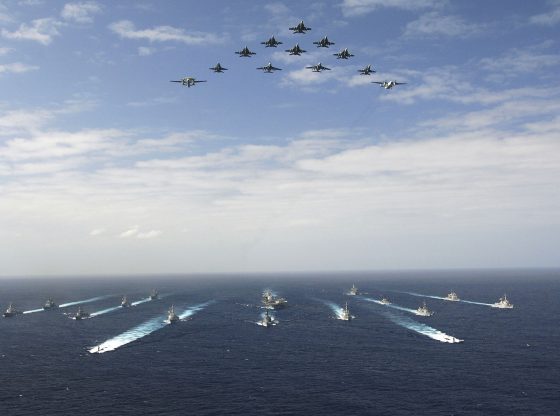 As warships from the USS Nimitz carrier strike group, and those from its “Quad” allies, India, Japan, and Australia, sail together during the significant ‘Malabar 2020’ naval exercise in the Bay of Bengal, the U.S. Navy plans to stand up a new numbered fleet just to counter China in the Indian Ocean. President Trump’s Secretary of the Navy (SECNAV) Kenneth Braithwaite says the planned new naval command won’t only focus on the Indian Ocean but also on adjacent areas of the Pacific.

Nevertheless, this new fleet will definitely put the “Indo” into the Navy’s renamed Indo-Pacific Command


According to USNI News, Braithwaite publicly called for setting up the additional fleet on Nov. 17, 2020, in remarks at the virtual Naval Submarine League’s annual symposium. The secretary noted that the new unit will be designated U.S. 1st Fleet, which was previously responsible for parts of the Western Pacific from 1947 to 1973. USNI noted other comments by SECNAV:

“We want to stand up a new numbered fleet,” Braithwaite said. “And we want to put that numbered fleet in the crossroads between the Indian and the Pacific oceans, and we’re really going to have an INDOPACOM footprint.”

“We can’t just rely on the 7th Fleet in Japan. We have to look to our other allies and partners like Singapore, like India, and actually put a numbered fleet where it would be extremely relevant if, god forbid, we were ever to get in any kind of a dust-up,” he added. “More importantly, it can provide a much more formidable deterrence.”

Where the new 1st Fleet will be based is still undecided, but several options are being considered. Though Singapore is the preferred solution, an expeditionary option is also being studied. The Drives notes that:

The Navy has had a presence at the Singaporean Navy’s Changi Naval Base since 1990 and now had Littoral Combat Ships (LCS) forward-deployed there under the operational control of 7th Fleet. One possible route the service could take to quickly establish 1st Fleet in Singapore could be to repurpose and expand, or otherwise leverage a portion of the 7th Fleet’s Logistics Group Western Pacific, also known as Task Force 73, which is based in that country now.

But if not, USNI quotes SECNAV as saying: “We’re going to put it, if not Singapore right out of the chocks, we’re going to look to make it more expeditionary-oriented and move it across the Pacific until it is where our allies and partners see that it could best assist them as well as to assist us.”

That means the 1st Fleet command element could be, as The Drive explains, “temporarily deployed to Singapore, or other countries in the region, such as Australia or even the British Indian Ocean Territory of Diego Garcia, at least initially.” While nominally based there, it could then use “rapidly deployable temporary command and control facilities” as part of The Navy and Marine Corps evolving concept of distributed operations in the Pacific.

In whatever way this new concept develops, it will significantly expand U.S. Navy presence and capabilities far into the Indian Ocean, while also relieving stress on the increasingly active 7th Fleet covering the Western Pacific. Under the Trump administration, the Navy continues to boldly meet the challenge of a belligerent and expansionist China.

Beijing Biden will give them our ships.

And sadly, We all know that Biden will defund the Military, give all the money to America’s underachievers, and leave our citizens less safe from our enemies from around the world.