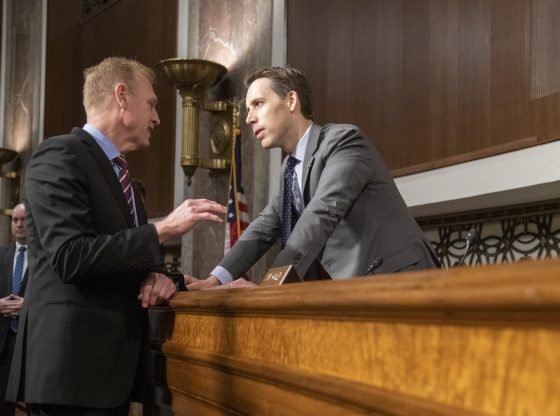 Sen. Josh Hawley (R-MO) used his moment in the spotlight at Tuesday’s bipartisan shellacking of Mark Zuckerberg and Jack Dorsey to address a whistleblower complaint alleging that Facebook, Twitter, and Google employees coordinated on what some are calling a censorship campaign.


Hawley said a former Facebook employee “with direct knowledge of the company’s content moderation practices” contacted his office about an “internal platform called Tasks that Facebook uses to coordinate projects, including censorship.”

“The platform reflects censorship input from Google and Twitter, as well,” Hawley alleged. “…Facebook censorship teams communicate with their counterparts at Twitter and Google and then enter those companies’ suggestions for censorship onto the Task platform so that Facebook can follow up with them and effectively coordinate their censorship efforts.”

Hawley also tweeted a screenshot of an apparent Tasks page on Tuesday afternoon.

Zuckerberg, Facebook’s CEO, denied any policy coordination though he added he’d expect “some level of communication.”

Everyone get off of Google and use duckduckgo as your search engine.

This is all a Dog & Pony show simply because we know these two BILLIONAIRE CEO’s will face absolutely NO consequences at all. Our Congressman have no power over them and they know it. Why they even bother is beyond me. Hillary will never stand trial for her traitorous actions and she knows it as well. It is very obvious that some ARE ABOVE THE LAW BECAUSE THEY’RE NEVER CHARGED WITH ANY CRIMES…!

This is where it starts. This is documentation. It is being brought out into the light and being removed from the “conspiracy” column and to the “we got you” column. Inch by inch. These people are darkness dwellers, they are very good at covering each other’s backs, because it covers their own too. Truthfully, this is how the world runs with demon possessed people being in control. But every once in a while someone like Trump comes along when it is God’s time to rise. The Almighty uses these people to push back the darkness so that people can be saved. #MAGA