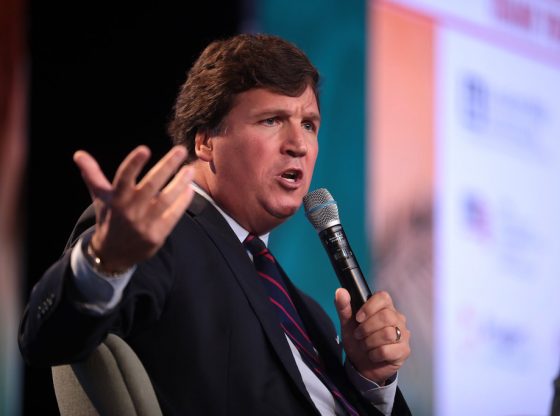 Maddow, one of President Trump’s staunchest critics, told Mediaite in an interview that Tucker has always held the same beliefs, opposed to his critics who speculate that he made a calculated decision to adopt a new persona to profit off of the rise of Trump.

Rachel Maddow dismissed a common criticism of Tucker Carlson: That he has changed his beliefs.

“He is not faking it,” she told Mediaite’s @aidnmclaughlin on the latest episode of The Interview https://t.co/H1ZWv5HHkW pic.twitter.com/9m8XWX7I9o

The Daily Caller has more:

“I think the thing that Tucker gets a knock for — that he doesn’t deserve — is this idea that he’s evolved and changed in some radical new direction,” Maddow explained. “Tucker has always been that guy. He is legitimately that guy. He is not faking it. He comes by his beliefs and his convictions and even his tone of voice quite naturally. He is not putting it on.”

Maddow went on to argue that Carlson often took a similar position to the one held by President Donald Trump — he was simply able to express that position in a way that was less likely to drive people away.

She added that someone with Tucker’s rhetorical abilities automatically becomes “a very powerful political force.”

I like someone who cuts to the chase and is honest about it. Doesn’t straddle the fence. No guessing with Tucker. Even though I don’t watch Fox anymore, I do follow Tucker, Hannity, and Laura. Rest have made their stance very clear. No thanks to them

I absolutely agree. Those three are the only ones worth watching plus Jeanine!!All the others are all fence sitters.

Mark Levin is moving to Parler, very soon. Check it out.

As EVERYONE should do for SURE!

Jesse waters and Dana Pterino are both very good and truly try there best for our President. its Greg Gutfield also . ! but Geraldo and brat Baier, McCollum are Climbers so they just latch onto Biden hoping he will Favor them . And Cavuto who no one can understand a worthless little Fat guy . FIRE GERALDO THE PIECE OF SHIT SEND HIM HOME TO HIS NOW HOME CLEVELND THEY DESERVE HIM

I LIVE IN CLEVELAND.. WE HAVE DONE NOTHING TO DESERVE HIM.

I agree with you Mary..but check out Hannity very carefully..he goes off the rails sometime. I noticed that he seems to talk over his guests,and more so with the conservatives.I find myself more and more tuning into Newsmax.

Me too! Tired of Hannity (and Laura) rudely talking OVER their guests!! Newsmax doesn’t allow it! All SO respectful of their guests!!

MARIS IS AMONG THE RIGHTEOUS…DONT FORGET HER….. AND EVEN JESSE, WHO HAS MERCIFULLY MATURED, HIAS STRONG TRUE CONSERVATIVE VALUES

I also like Jesse Waters…and Judge Jeanine, they both call it as it is and stands with and for our great Pres. Trump especially Judge Jeanine…She should be a Supreme Court Judge…. President Trump has proven and demonstrated by making the “Impossible”, “Possible”, , achieving more than any president even with all the hatred. lies, attempts to impeachment him daily for over 4 years…a natural born leader/President also of the world…”We The People” will always stand and defend him and will always be our President…President Trump 2020. 👍❤️🙏🏻🇺🇸

Who care what Rachael Maddow thinks, says or does!!! I don’t!!

check out Jimmy Dore on You Tube, Maddow is one of his favorite targets, and he has a good aim.

Tucker is one of the main reasons I watch Fox News! He leaves, I and many others leave!

I left along time ago…THE FOX WAS SHOT MONTHS AGO when their MANAGEMENT CHANGED TO A SOCIALIST APPROVED DOCTRINE STRAIGHT FROM THE LEFTISTS AND DETRACTORS OF “TRUMP!” THAT’S WHEN I FLUSHED FOX DOWN THE TOILET ALONG WITH THIER TALKING HEAD TURDS….

I wish Tucker would go to the pundit

I HAVE LEFT BUT RETURN FOR TUCKER, OCCASIONALLY LAURA, AND MARIA!