Fifteen Police Officers Have Died Since Nationwide Protests Began. Here’s Who They Are. 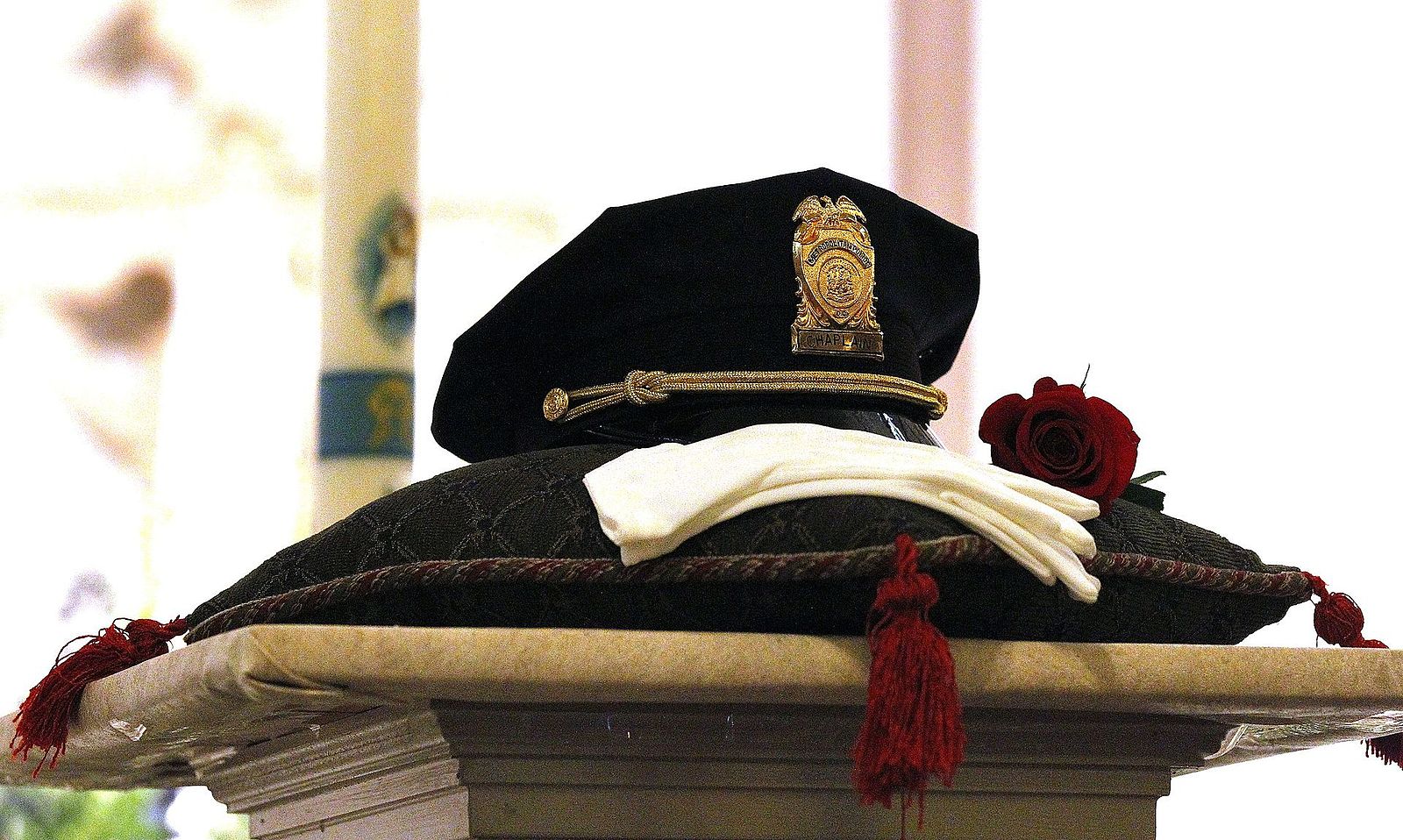 George Floyd’s death on May 25 came after a white police officer put his body weight on Floyd’s neck for nearly nine minutes while he lay handcuffed on the ground. Protests justifiably erupted nationwide. Violent rioters co-opted a small percentage — but a significant number of them.

As of last week, at least 17 people have perished in the unrest.


Here’s a list of all the police officers who’ve died since May 25. While some demonize the police as a whole, we want to take time to honor the memory of officers who lost their lives in service to their communities.

Trooper Baron of the Connecticut State Police perished on May 25, after a lengthy battle with 9/11-related cancer caused by toxins in the dust that shrouded Lower Manhattan in the aftermath of September 11, 2001.

Baron contracted cancer while assisting with the recovery efforts at Ground Zero.

On the morning of September 11, 72 law enforcement officers and 343 firefighters lost their lives in and adjacent to the World Trade Center. Besides Baron, at least 49 police officers have since died from exposure to the toxic dust from the collapsed buildings.

Eugene Kenneth Baron was 56. Baron is survived by his two children, his parents, two sisters, his girlfriend, and her two children.

Holte and another officer with the Grand Forks Police Department came to the assistance of two sheriff deputies to serve eviction papers to Salamah Pendleton at his apartment complex on May 27.

Pendleton, 41, had a long rap sheet with dozens of charges dating back at least 20 years. After officers entered his third-floor apartment, Pendleton retreated to his bedroom and opened fire with a semi-automatic rifle, killing a woman inside the room.

Pendleton hit Officer Holte three times, who died at the hospital. Two other bullets from Pendleton in the 41 shot exchange hit another officer in the leg and abdomen.

Officer Lyday lost his life responding to a domestic disturbance call in Odgen, Utah, on May 28.

Upon arriving at the residence where the Odgen P.D. received the call, John Coleman shot and killed Lyday. Coleman then turned the gun on himself and committed suicide.

Detective Songy died on May 29 following a long battle with COVID-19, which he presumably contracted while on duty.

Songy served on the Rutland Police Department in central Massachusetts for eight years. He served for six years before that in nearby Oakham.

The 48-year-old received several commendations during his career. He left behind a wife, daughter, and two step-children.

Deputy Rule lost his life after being mistakenly shot by a Fort Bend County Sheriff’s deputy during a search for a suspicious person.

While clearing a suburban Houston home at 1:40 a.m. on May 29, a startled deputy shot Rule in the chest. He was not wearing a bulletproof vest and succumbed to his wound at the hospital.

Rule, 37, had worked at the Fort Bend County Constable’s Office for nine months. Before that, he served in the Missouri City Police Department for 14 years.

He leaves behind a wife and four children.

Officer Johnson of the Detroit Police Department died from a traumatic brain injury two years after receiving a gunshot wound while responding to a domestic violence call at an apartment complex.

While knocking on the apartment’s common door on April 30, 2017, a man not connected to the call opened the door and pointed a semi-automatic pistol at Johnson. Johnson and the suspect fired at each other nearly simultaneously. The suspect died at the scene but not before shooting Johnson in the head. Johnson, 48, spent the rest of his life at a healthcare facility. He is survived by his wife and three children.

Lieutenant Williams of the Moody Police Department and a 23-year veteran of law enforcement in Alabama, perished while responding to a call for service at a Super 8 hotel on June 2.

After arriving on the scene, a gunman mortally wounded Williams. Authorities took two suspects into custody hours later after they barricaded themselves inside their hotel room.

Retired St. Louis Police Capt. David Dorn, 77, lost his life at a pawn shop break-in during a night of rioting.

Prosecutors charged Stephan Cannon, 24, and Mark Jackson, 22, with murder in the fatal shooting. Authorities believe Cannon was the shooter. Both men remain in custody without bond.

Dorn, an African American, was a friend of the owner of Lee’s Pawn & Jewelry and often responded personally when its alarms went off. But the night of June 2 was different.

Violent protests rocked St. Louis that evening well into the following morning in response to the death of George Floyd.

In the ensuing chaos, four police officers were shot. Improvised projectiles wounded several others. Dozens of businesses were looted and vandalized.

Dorn reportedly arrived at the store as Cannon and Jackson stole several televisions.

Before his retirement in 2007, Dorn served on the St. Louis Police Department for 38 years. Those who knew him cited his gregarious personality and eagerness to mentor St. Louis’ youth.

Officer Coronel was one of the latest of the 46 police and correctional officers who’ve died as a result of contracting COVID-19.

Coronel, 51, contracted the coronavirus while arresting an offender on April 29, who had it. Despite being hospitalized in San Diego for over three weeks, Coronel succumbed to the virus on June 3.

The El Centro, California police officer was a 24-year lawman. He is survived by his wife and two children.

Sheriff Clark died from injuries sustained in an automobile collision on June 3 while responding to a request for emergency assistance from one of his deputies.

The collision occurred east of St. Joseph, Missouri on Highway 36 at the Osborn junction.

The DeKalb County Sheriff was 43. His wife, four children, parents, and brother survive him.

Sergeant Gutzwiller of the Santa Cruz County Sheriff’s Office was shot and killed on June 6 while investigating reports of a suspicious vehicle.

The sheriff’s office received a call about a vehicle containing firearms and explosives. When Gutzwiller and his fellow deputies arrived at the scene, they notice a vehicle matching the description given to them leaving.

The driver of the van drove home with law enforcement following. Upon pulling into the driveway, the driver ambushed the deputies with firearms and improvised explosive devices, killing Gutzwiller and wounding another deputy.

The suspect then hijacked a car and later engaged in another shootout with law enforcement, wounding a California Highway Patrol officer.

Damon Gutzwiller was 38. He is survived by his pregnant wife and young child.

U.S. Customs and Border Protection (CBP) Agent Johan Mordan died on June 11 after losing radio contact with other agents while on patrol in New Mexico’s Bootheel, a particularly inhospitable part of the U.S.-Mexico border.

When Mordan’s colleagues reached the 26-year-old, he was already unconscious. Their attempts to revive him failed. He had served with the United States Border Patrol for less than a year.

Steven Joaquin Blackwell has been charged with killing Sheriff Blair.

Blair was placing Blackwell, an inmate, in his squad car following a psychiatric evaluation in Mendenhall, Mississippi, on June 13, when he was attacked.

The suspect, 22, gained control of the 77-year-old’s service weapon and killed him before escaping on foot. He was apprehended the next day.

Blair was a 50-year veteran of law enforcement and is survived by his wife and grandsons they were raising following his daughter’s passing.

Officer Provins succumbed to injuries sustained in an automobile collision on June 13. The crash occurred on June 3 in Jefferson Hills, Pennsylvania. Provins was airlifted to a Pittsburgh hospital where, despite doctors’ best efforts, he could not be saved.

Keen, 30, was off-duty when he was shot and killed on June 14 while attempting to apprehend a hit-and-run suspect.

Hendry County deputies found Keen’s body after responding to the shooting near the intersection of State Route 80 and N State Road 29, between Fort Myers and Lake Okeechobee.

Julian Keen had served on the Florida Fish and Wildlife Conservation Commission for six years.

if i were a police officer in the u.s. i would quit right now , you cant arrest thugs without being treated like one. trump2020

My last month’s online job to earn extra dollars every month just by doing work for maximum 2 to 3 hrs a day. I have joined this job about 3 months ago and  in my first month i have made $12k+ easily without any special online experience. Everybody on this earth can get this job today and start making cash online by just follow details on this website………
HERE══════►►►Click More Here

Latest bad arrest ending in a death. Victim fought law and wrestled away a taser. Ended up dead. Manslaughter at best. Learn to be polite and go down town and bail out. But why Mansl;aughter/ He was asleep in a no parking zone at Wendy’s. He was in back seat asleep or passed out. Therefore he was guilty of parking in a no parking zone and should have been issued a ticket. Since he was either drinking, doping, or had a medical condition, his keys should have been sent down town along with his ticket. Next day he could pay off ticket, and then retrieve his keys, then his car. No one dead, no resist arrest record, no point in fighting or getting killed. He did wrong, they did wrong, and he ended up dead. Law officers used poor judgement, he used poor judgement off setting each other. He died of misadventure resisting arrest. Officers should be fired. Other officers should have this explained to them. No DUI when victim was asleep. No proof he drove under the influence.

God bless all who have served. 15 police officers for one criminal, black or white makes no difference, I AM FRIENDS WITH AS MANY BLACK FOLKS AS WHITE AND WE ALL AGREE THIS HAS GONE ON TOO LONG AND COST WAY TOO MUCH MONEY.

I am making a good salary online from home.I’ve made 97,999 dollar.s so for last 5 months working online and I’m a full time student. I’m using an online business opportunity I’m just so happy that I found out about it…………..Join Here