REPORT: Investigation Opened Into Whether Ivana Trump Was Killed by Fall Down Stairs 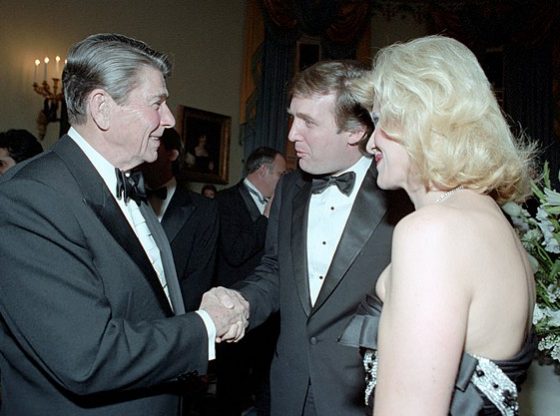 2/11/1985 President Reagan shaking hands with Donald Trump and Ivana trump during the State Visit of King Fahd of Saudi Arabia at the state dinner in the Blue Room. Via Wikimedia Commons.
| AAN Staff | Politics | 11
Advertisement
Draft DeSantis for 2024! [CLICK HERE]

An investigation has now been opened by police into whether Ivana Trump, the ex-wife of former President Donald Trump, fell down the stairs before she died.


The New York City Police Department is investigating if Ivana Trump fell down the stairs of her apartment in New York’s Upper East Side, The New York Times reported, citing two unnamed law-enforcement officials with knowledge of the matter.

ABC News reported, citing unnamed police resources, that Trump was found unconscious and unresponsive at the bottom of stairs in her apartment and that police are investigating whether she had fallen down the stairs.

ABC News also reported that paramedics responded to a report of a cardiac arrest in her apartment on Thursday and found a 73-year-old woman, who was then declared dead at the scene.

A spokesman for the NYPD has stated that the department was awaiting an official cause of death from the medical examiner to determine exactly how Ivana died.

Don’t let them Dems investigate. I’m sure they are convinced Donald did it.

Joe Biden President, loves this Country so much he does not want to see his fellow Americans hurting over high gasoline cost, high energy cost, shortages, have decided to take the risk of our Nations National Security and use our National Reserve oil to lower gas prices at the pump. Mr. President, Hunter is on the line, say what, will have to ship that oil to China instead, what about your promise to the American people. The world would like an answer to that question.

Oh good the tart Libs & fake news turds will blame Donald Trump and feel all good about how they can make this ugly like themselves.