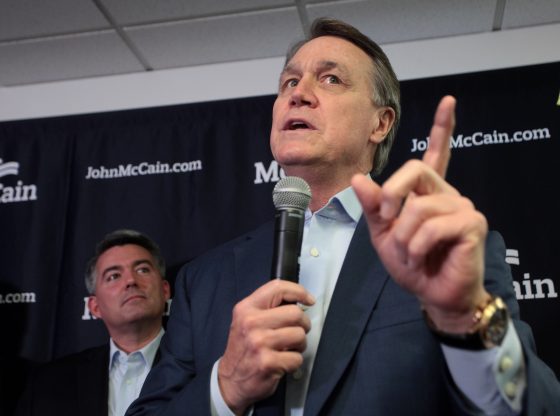 Runoff elections, required in Georgia if no candidate wins more than 50% of the vote in the underlying primary or general election, historically have been relatively straightforward — all about turnout.

Not this time. There is nothing straightforward about the runoff election scheduled for January 5, 2021. Nothing.


To begin with, it is a double-header, with both of Georgia’s sitting Republican senators — Kelley Loeffler and David Perdue — on the ballot. Loeffler is in the runoff by virtue of having been appointed earlier this year by Georgia’s Republican Gov. Brian Kemp. Then, in a field of 20 candidates, she came in second in the November 3rd special election. Perdue joins Loeffler on the runoff ballot because in his race to secure a second six-year term last month, he barely missed winning a majority.

Loeffler’s opponent is Rev. Raphael Warnock, the fire-and-brimstone preacher at Atlanta’s venerable and historic Ebenezer Baptist Church. His well-documented views are far to the left of any person who ever has served as a senator from Georgia. Facing Perdue is Jon Ossoff, a self-styled “investigative reporter” who also has aligned himself with the extreme left wing of his Party.

If those were all the elements for the runoff equation — two Republican Senators with solid conservative credentials each facing a Democrat with aggressively liberal views — you could pretty much draft the headline for January 6th: “GOP Easily Holds Both Georgia Senate Seats.” But there are other elements swirling around in this mix; factors that make it far more difficult to handicap either race one month out.

Overarching everything in this runoff is the fact that the very balance of power in the Senate hangs on these two races. Senate Minority Leader Chuck Schumer (D-NY) is every bit as aware of what is at stake as is the man he hopes to succeed, current Majority Leader Mitch McConnell (R-KY).

If the GOP fails to retain at least one of these two Senate seats, then come January 20th and barring a miracle for President Trump’s persistent efforts to be declared the victor over Joe Biden, Vice President Kamala Harris becomes in effect the 101st Senator, and Schumer will rise to the powerful post in that body which he has long coveted. If that happens, it becomes a catastrophe as close to a total disaster as any in decades for the GOP.

However, even with the Senate majority hanging in the balance, handicapping the Loeffler and Perdue races as GOP wins still should be a fairly safe bet. While Georgia is no longer as solidly and predictably Republican as it had been until just a couple of election cycles past, a majority of Peach State voters are nowhere near ready to embrace the Bernie Sanders or “AOC” wing of the Democrat Party, to which both Warnock and Ossoff have attached themselves.

So, what is the problem for the GOP in Georgia?

In a broad sense, it is the recurring problem that has bedeviled Republicans for decades — they by and large are not street fighters like Schumer and his allies. Thus, back in March, Georgia’s Republican Secretary of State, Brad Raffensperger, decided to “settle” — rather than fight — a lawsuit brought by Georgia Democrats challenging certain aspects of the state’s mail-in balloting verification process. It was this agreement, along with Raffensperger’s decision to open the floodgates for mail-in balloting this year, that has raised serious credibility issues surrounding the results of last month’s national election in the state.

Even considering all those problems — real, potential, or perceived — relating to massive mail-in balloting, the two contested Senate seats still should remain in Republican hands. Why? Because some things just do not change.

Georgians still support the Second Amendment. Georgia voters, when presented with a choice between a tax-and-spend liberal and a fiscal conservative, still prefer the latter. Georgians still do not take kindly to being shouted at by people in Washington like Chuck Schumer, telling them where they are supposed to go. And voters in Georgia still support the Stars and Stripes and the men and women who wear them on their uniforms, whether in military camo or law enforcement blue.

These are values and policies Loeffler and Perdue openly support. It may be a big “if,” but if the Republican Party to which both Senators belong can focus on these values and policies, and turn people out to vote for these reasons, both senators should clear the hurdle facing them on January 5th.

You have to factor in about a 4% cheat margin. Crazy but most conservative pundits are saying that is the likely illegal vote factor. What a sad commentary for our great country. We are becoming the “banana republic” of North America!

With God’s blessings Trump will prevail and be back in his oval office defeating all these scumbag democrats who will burn in hell.

AND ETERNITY IN HELL IS A VERY VERY LONG TIME. THINK ABOUT IT.

Georgia’s Federal election is a fraudulent mess and certified Biden, Fraudulent voting is the cause of the run offs. They are using the same machines again. Watch the Governor certify the senatorial results the same night.