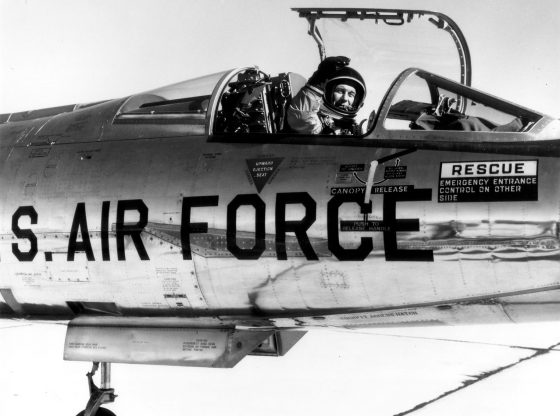 Chuck Yeager, the World War II fighter ace who broke the sound barrier in 1947, has died at the age of 97.

The future aviation pioneer enlisted in pilot training for the United States Army Air Forces weeks after America’s abrupt entry into the Second World War. Yeager’s squadron arrived in Great Britain in 1943 as part of the Eighth Air Force. He survived being shot down over Nazi-occupied France in one of his earlier raids before escaping to allied lines with assistance from the local resistance. After persuading General Eisenhower to let him return to the sky, Yeager went on to score 13 aerial victories — including five in a single mission.


John Nicoletti, a close family friend, announced Yeager’s passing. It came on the 79th anniversary of the Attack on Pearl Harbor.

Fr @VictoriaYeage11 It is w/ profound sorrow, I must tell you that my life love General Chuck Yeager passed just before 9pm ET. An incredible life well lived, America’s greatest Pilot, & a legacy of strength, adventure, & patriotism will be remembered forever.

Following his wartime service in Europe, Yeager left an indelible mark on history by breaking the sound barrier as an Air Force test pilot.

His signal achievement came on Oct. 14, 1947, when he climbed out of a B-29 bomber as it ascended over the Mojave Desert in California and entered the cockpit of an orange, bullet-shaped, rocket-powered experimental plane attached to the bomb bay.

An Air Force captain at the time, he zoomed off in the plane, a Bell Aircraft X-1, at an altitude of 23,000 feet, and when he reached about 43,000 feet above the desert, history’s first sonic boom reverberated across the floor of the dry lake beds. He had reached a speed of 700 miles an hour, breaking the sound barrier and dispelling the long-held fear that any plane flying at or beyond the speed of sound would be torn apart by shock waves.

“After all the anticipation to achieve this moment, it really was a letdown,” General Yeager wrote in his best-selling memoir “Yeager” (1985, with Leo Janos). “There should’ve been a bump in the road, something to let you know that you had just punched a nice, clean hole through the sonic barrier. The Unknown was a poke through Jell-O. Later on, I realized that this mission had to end in a letdown because the real barrier wasn’t in the sky but in our knowledge and experience of supersonic flight.”

Nonetheless, the exploit ranked alongside the Wright brothers’ first flight at Kitty Hawk in 1903 and Charles Lindbergh’s solo flight to Paris in 1927 as epic events in the history of aviation. In 1950, General Yeager’s X-1 plane, which he christened Glamorous Glennis, honoring his wife, went on display at the Smithsonian Institution in Washington.

By the time he left the Air Force in 1975, General Yeager had commanded fighter squadrons in three wars.

A true American hero and Patriot!

One of a very exclusive group of HEROS. R I P General Yeager

REST IN PEACE MR. YEAGER, GOD BLESS! WE NEED MORE HERO’S LIKE YOU TODAY. ONES THAT ARE WILLING TO STAND UP AND DEFEND THE RIGHTS OF THE PEOPLE THAT THE DEMOCRATS ARE TRYING TO TAKE AWAY FROM US.