Author Comes Out ‘In Defense of Looting’ Amid Violence 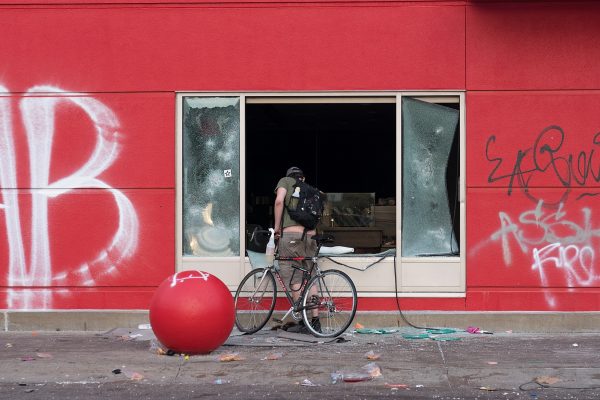 Americans wondering about how and why the media insists on referring to riots as “mostly” non-violent protests morphed so quickly into ugly mob attacks on not just the police and civil society but as an excuse to loot and destroy businesses in city after city should read Vicky Osterweil’s new book.

To those who have never heard of Osterweil are in for a shock. She is a radical leftist writer and activist living in Philadelphia who is widely published and admired in progressive circles. Her new book is called “In Defense of Looting” and argues that what’s going on is a “method of direct redistribution of wealth from store owners and capitalists to the poor.” Ms. Osterwiel, in fact, sees the looting not as an aberration, but as a goal of the protest because it undermines the very concept of private property that she detests and sees as the foundation of a capitalist system she believes must be destroyed to “fundamentally transform” America.


She also celebrates the looting and theft as good for the looters because it gives them “joy” and empowers them. It also improves their lives materially “first of all, it makes it easier to live your life because you get lots of stuff for free.” Grabbing a sixty-inch flat-screen television to take home and enjoy would, of course, make watching the Sunday “NFL Game of the Week” more enjoyable without guilt since in addition to enjoying the game he and his guests could take comfort knowing they had more right to it than those from whom it was “liberated.”

In several cities, the “mostly peaceful” protestors have, after stripping the stores they’ve broken into migrated to residential neighborhoods demanding that those living there turn over their homes to them. If any do, they will presumably be even happier as they will then have a “free” place to live and enjoy the rest of their free stuff.

Ms. Osterweil says she doesn’t favor violence or killing but believes white Americans who have benefitted from the systemic racism around them have no right to hold on to wealth that should be given to the poor… or taken if that proves the only way.

In recent days, Democratic Presidential wannabe Joe Biden has begun belatedly and half-heartedly suggesting that he doesn’t really support the violent protests plaguing so many of our cities. He is, according to most analysts, doing so because his pollsters are telling him that the public is outraged at what’s going on and want it to stop. The former Vice President has never had any difficulty changing his position on issues when the wind shifts, so can be expected in the days ahead to try to further distance himself from the violence without offending those within his party more sympathetic than most voters to the looters and the views of Ms. Osterweil.

Chief among them is his running-mate, Kamala Harris, who has expressed sympathy with the protestors and has pointedly refused to condemn the extremists among them and who he chose at least in part to make his candidacy more palatable to the radicals within his party.

As the looting raged, Harris declared, like Ms. Osterweil, during an interview that the “movement” now underway to transform America is “not going to stop.” The protestors, she said, are not going to let up and they should not and we should not.” Those are the sorts of words that candidate Biden is trying to get out from under. One can only wonder if he can do so without distancing himself from his running-mate.

We won’t know until November if Biden can successfully satisfy the Harris and Osterweil factions now in control of his party while at the same time convincing a majority of America’s voters to vote for him, but doing so may be more difficult than he and his managers of a friendly media believe.

READ NEXT: CNN’s Don Lemon Has Powerful Warning for Rioters >>

Nearly 150 MILLION Americans tuned in to watch the RNC. How did Trump do? TELL US!
The Most Important Video of 2020 Shows Who’s Behind the Violence

Her death would be a public service.

Yes, it’s a massive dose of covetousness and hate.

Perhaps if some of her things were liberated, she’d be singing a different time!!?