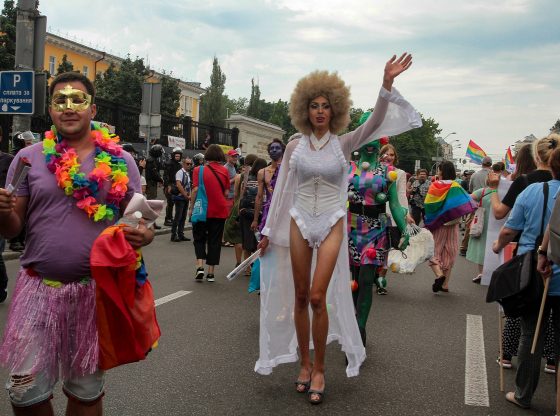 The commander of Chechen forces fighting for Russia in Ukraine recently described his forces as “the army of Jesus” in a “holy war” against the “Satanic” values of Europe and the United States, which he called the “anti-Christ.”

Apti Alaudinov, also said: “We are not under the flags of the LGBT and as long as he’s alive, we won’t be under those flags.” The Chechen commander made the remarks during a recent segment of Russia’s state-run Russia-1 television channel.


Julia Davis, creator of the Russian Media Monitor shared a clip of his remarks on Twitter last week.

In his comments, the Chechen commander praised Putin for standing up against the West and NATO, describing them as evil. He praised the Russian president for preventing LGBTQ rights from advancing in their country, contending that the fight in Ukraine was a war against the marginalized community.

When rainbow flags are everywhere, Big Tech censors any negative comments about them, and the LGTBQ+ agenda is being forced on school children throughout the US and the West, it is hard to say the group is in any way ‘marginalized,’ but back to the main story. Newsweek continued:

“This is a holy war our saints and elders spoke of,” Alaudinov asserted, who went on to say that he praises God to live in Russia and that the country is led by Putin. “He is the man that refused to accept the so-called European values,” the commander added.

“In reality, those are Satanist values that are imposed on the entire world,” he said. Alaudinov noted that he is “grateful” that Putin is following the values of “the Most High,” referring to God.

He also called American democracy “the main enemy of mankind.” Continuing, he said the U.S., Europe, and NATO carry within them “everything that is Satanic,” and that they are “the army of the anti-Christ.”

Ironically, under Vladimir Putin, Russia is at the forefront of protecting traditional marriage and opposing the radical leftist transgender ideology, which until very recently the United States still did. Newsweek goes on to cite a 2021 Human Rights Watch report on Russia:

As a result of the 2020 constitutional reform, the definition of marriage as a union between a man and a woman was incorporated into the constitution. A bill submitted to parliament includes a ban on same-sex marriage and changes that will negatively affect transgender people’s rights, including to marry and raise children.

While this quasi-religious Russian justification for the war appears to have evolved after the invasion of Ukraine, some Christian conservatives and traditionalists in the U.S. and the West might be asking if we are fighting for the right side.

Ramzan Kadyrov, Putin’s Chechen puppet as leader of the Republic of Chechnya, has set up concentration camps there where gay Chechens are being tortured and murdered .
Both he and. Putin are brutal monsters who must be stopped , thrown out of office and. held responisble for their crimes against humanity !