The Slap Heard Around the World 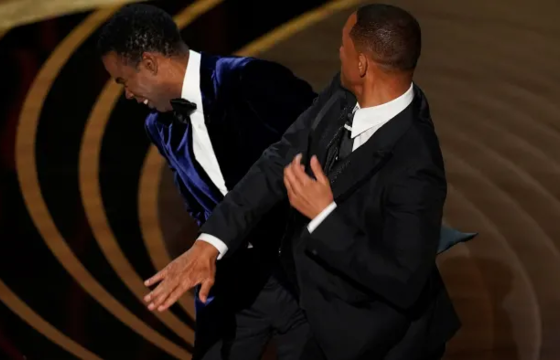 Will Smith slaps Chris Rock over joke about his wife at the Oscars 94th Academy Awards. Via Wikimedia Commons.
| Ben Shapiro | Opinion,Politics | 10
Advertisement
SAVE the REPUBLIC and Help Stop Pelosi [ACT NOW]

This week, Will Smith — perhaps the most bankable star of his generation — won an Oscar for Best Actor for “King Richard.” But that wasn’t why he made headlines. He made headlines because during the Academy Awards ceremony, comedian Chris Rock told a joke about Smith’s wife, Jada Pinkett Smith. Jada, it seems, suffers from alopecia; Rock, presumably not knowing about her condition, made a joke about her starring in “G.I. Jane 2,” a nod to her closely shaven head. Initially, Will Smith laughed. Then he glanced around and saw Jada was upset.

At which point he got up, strode to the stage, and proceeded to slap Rock directly across the face.
Then he sat down again.

Suffice it to say, it was perhaps the oddest incident in nationally televised history. The only rivals might have been Justin Timberlake ripping off Janet Jackson’s top to reveal a pasty at the Super Bowl XXXVIII halftime show, or the live OJ Simpson car chase during the NBA Finals. But this event was even odder, given the utterly sudden nature of the assault. Rock, after all, was hired to lightly roast actors. Will Smith was there to pick up his first Oscar. And the whole thing devolved into actual violence.

It’s easy to brush off the event as yet another disposably silly celebrity moment. It would be easier if Rep. Ayanna Pressley, D-Mass., hadn’t immediately tweeted (and then deleted), “Thank you #WillSmith Shout out to all the husbands who defend their wives living with alopecia in the face of daily ignorance & insults.” Or if Rep. Jamaal Bowman, D-N.Y., hadn’t tweeted, “Teachable Moment: Don’t joke about a Black Woman’s hair.” Or if the entire Academy Awards audience hadn’t given Smith a standing ovation a few moments later. Or if there hadn’t been widespread support for Smith’s slap online, thanks to the now-common belief that verbal insults constitute a form of violence to which violence is an acceptable — indeed, commendable — response.

The social compact by which verbiage and violence remain strictly separated is a delicate one. For most of human history, words were treated as punishable by physical response — dueling was commonplace in societies for centuries, familial retaliation for insult was regular, and wars were even fought over verbal slights. But over time, civilized people traded away the privilege of personal use of force in favor of rules; truly offensive words could sometimes meet with social disapproval or even ostracization, but certainly not violence.
Now we seem to be reversing the trend. The entire theory of “microaggressions” suggests that if you are offended, it is because someone has “aggressed” against you — and aggression requires response. To deny someone’s preferred pronouns is now an act of “erasure” amounting to violence, since the person so slighted might feel damaged in their sense of worth or authenticity. Once we reconnect the severed link between words and violence, civilization will begin to break down.

We can hope that Will Smith’s slap remains an aberration; a country in which comedians are regularly assaulted for making jokes will soon be a rather humorless place. But unless Americans are willing to reestablish the hard barrier between words and violence, we will become a far more silent and far more violent nation.

Ben Shapiro, 38, is a graduate of UCLA and Harvard Law School, host of “The Ben Shapiro Show,” and editor-in-chief of DailyWire.com. He is the author of the New York Times bestsellers “How To Destroy America In Three Easy Steps,” “The Right Side Of History,” and “Bullies.” To find out more about Ben Shapiro and read features by other Creators Syndicate writers and cartoonists, visit the Creators Syndicate website at www.creators.com.
COPYRIGHT 2022 CREATORS

It’s called acting, otherwise Chris would have hit back! Wouldn’t you?

He even leaned into it.

It exposed Will Smith for the glory hog he is…totally tasteless on his part and Chris Rock as well. Ignore Hollywood as they are all boors!