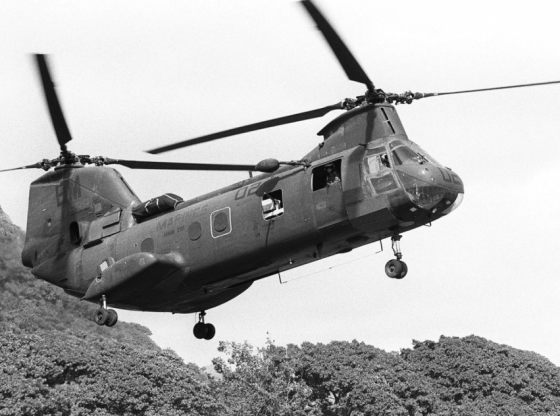 President Biden’s tragically avoidable ‘Saigon Moment’ in Afghanistan may be a closer parallel than initially thought. Not only were the images of helicopters flying from U.S. embassies eerily similar in both crisis evacuations, but it turns out that the same exact helicopters may have been used in 1975 and now in Kabul.

While the most iconic photo from Saigon in 1975 is that of a civilian UH-1 Huey sitting on top of the US embassy taking on embassy staff, quite a few dual rotor Ch-46 ‘Phrogs’ (officially known as ‘Sea Knights’) – flying from the deck of the USS Hancock – were also used during  Operation Frequent Wind, the U.S. mission to rescue as many people as possible from Saigon as communist North Vietnamese troops engulfed the city.

During my time in the Marines, I flew on many Phrogs, especially when I was with the 11th Marine Expeditionary Unit – Special Operations Capable (MEU-SOC’s) helicopter assault company. I even had a minor crash landing in one in South Korea.

And some keen observers noted that at least one of the helicopters seen flying over Kabul could match one seen in Vietnam-era photos of the Saigon evacuation. These two-tone blue and white CH-46Es belong to the  State Department’s Air Wing, and  according to The Drive:

The Bureau Number (BuNo), a serial number applied to all aircraft that the U.S. Navy purchases regardless of their ultimate recipient, on one of the helicopters in the photo could read 154038, matching a CH-46E that was indeed transferred to the State Department as N38TU in 2012. If accurate, at least one Sea Knight may have participated in both historic evacuations.

First, a Getty image of Dep’t of State Air Wing CH-46 N38TU (BuNo 154038) over Kabul evacuating the US Embassy today. Second, what appears to be 154038 on the deck of USS Hancock during Frequent Wind, the evacuation of Saigon. The more things change, the more they stay the same. pic.twitter.com/EqVMxxqFZw

Nicknamed the “Phrog”(or Battle Phrog) by a Marine Corps major due to its frog-like appearance from the front, the CH-46 Sea Knight was originally procured by the Marines in 1961. Exactly why Marines used the “ph” has apparently been lost to time. Whatever the origins of the spelling, the “Phrog” moniker is apt in more than one regard…

During Operation Frequent Wind, 71 helicopters flew over 650 sorties between Saigon and elements of the Seventh Fleet off shore. The high operational tempo led to some accidents, with a CH-46 flown by Captain William Nystul and First Lieutenant Michael Shea crashing into the sea after a night mission, killing both men. The enlisted crew survived the accident, but the bodies of the two pilots were never found…

Ultimately, the CH-46 played a pivotal role in saving the lives of more than 7,800 people in the helicopter airlift portion of the closing chapter of the Vietnam War.

And now, it seems, similar helicopters, or maybe even some of the same ones, are evacuating Americans and allies from the current disaster in Kabul, Afghanistan.

Well, it’s about time. Joe Biden is so worried about bringing tens of thousands of Afghans to America that I saw one Afganie riding on an Aircraft wing. I think he may have Covid 19 Virus so the Pilots may have refused to allow the Afghani to ride inside the Aircraft.. Just sayin

Imagine That the Same bird, during both U.S. Unconditional surrenders and Cut And RUN Escapes, And at the Same Time Both Escapes Orchestrated by Retarded civilians in the white house

What a humiliating history for an otherwise long serving proud bird……………

Looking in my old Marine flight log book, I flew the CH-46 helicopter with 154038 buno number in 1970. Flew it from NC to San Diego where it was dispatched to Vietnam. I had already been.

Have you flown aboard the HH-43 Huskie? (Pedro callsign) One of the post-flight procedures for the crew and pax was to count your teeth.