Liberal City Is Experimenting With Socialism, and It Is Failing Miserably 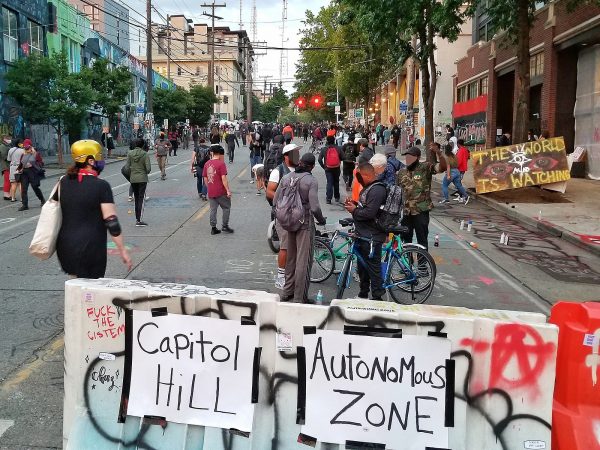 Let us count the ways…

Seattle is in the midst of a crisis unprecedented in American history and eerily similar to the Paris Commune of 1871.

As with the proletariat revolt in Paris more than a century ago, Seattle’s Capitol Hill region has declared itself autonomous from the country it resides in.


While Paris’ socialist “utopia” survived for months, this one is already showing signs of cracking; however, Seattle’s far-left mayor is more concerned with convincing rioters she’s on their side then restoring law and order.

For his part, Trump is prepared to drop the hammer.

Here are all the ways Seattle’s socialist experiment failed on day one!

Citizens living in the Capitol Hill Autonomous Zone (CHAZ) have limited recourse if they are the victim of violent crime since Seattle Mayor Jenny Durkan forced the Seattle Police to abandon the East Precinct.

Seattle Police Chief: “Rapes, robberies and all sorts of violent acts have been occurring in the area and we’re not able to get to [them].” #capitolhillautonomouszone #antifa #BlackLivesMatter pic.twitter.com/Oe5YfVz3uL

SPD Chief Carmen Best is fighting to reopen the precinct as calls for police assistance from Capitol Hill have tripled in recent days. Emergency response times in the area (with the streets barricaded) have increased from five minutes on average to 18.

Journalist Andy Ngo went to Seattle to report on the situation on the ground. Unlike the mayor who has called the anarchy a “block party,” Ngo shared reports that armed radicals are trying to extort business owners unfortunate enough to be trapped in the far-left cauldron. Sounds just a bit like the mafia, no?

I went on Fox News to explain what’s happening inside the Seattle “Capitol Hill Autonomous Zone.” Biased media will have you believe it is just a block party but in fact, there are armed people patrolling w/ reports they’re trying to extort businesses. https://t.co/WhNnht2rHs pic.twitter.com/4vYDcZx2T9

Occupiers caught a pro-life protester filming inside the autonomous zone. A mob-like crowd descended on his location, taunting him viciously. He was lucky they didn’t get physical, but it doesn’t look like it would take much to incite violence.

Occupiers forced this guy out who was live-streaming inside the zone. The crowd was calling him a white supremacist, though the man being pushed out says he’s simply an anti-abortion advocate. The crowd chanted, “Who don’t matter? This motherfucker!” pic.twitter.com/qCBl1K7G90

Building Their Own Wall

The Left doesn’t like walls unless they serve their ends. In the case of establishing a separate political entity inside Washington State’s largest city, erecting barricades and calling for volunteers to provide armed guard over them is justifiable.

However, securing the U.S.-Mexico border is another matter entirely.

Seattle @MayorJenny is allowing a dangerous situation to fester. #Antifa militants have taken over & created an “autonomous zone” in city w/their own rules. Police precinct abandoned. Antifa set up barricades to create a border. Calling for volunteers to provide armed guard. pic.twitter.com/ksQI4NI5kP

Communism and hunger go hand-in-hand, so it’s no surprise that after less than a week, the residents of CHAZ have begun to run out of gluten-free pasta and Clif bars.

A “No-Cop-Co-Op” has dolled out free food to the vagrants already living in the neighborhood, but it’s not sustainable even under normal conditions. With the influx of scraggly radicals, new vagabonds, camping tents, and piles of litter, the area looks like a scene from the movie “Dunkirk.”

72 hours after the establishment of the #CapitalHillAutonomousZone, there are apparently already food shortages. pic.twitter.com/HBlCynDQYH

Antifa Is Already There

The mainstream media loves to downplay, or if not downplay, justify the existence of violent left-wing tactics. So far, many are claiming Antifa isn’t even tangentially affiliated with CHAZ. That flies in the face of the violence being reported and posts from prominent Antifa social media accounts. Many of which are posting from the autonomous zone itself.

Why are people doubting the involvement of antifa in the Seattle occupation? All the main antifa accounts on social media are expressing support for it and calling for comrades to help it continue. Many are tweeting/posting from the “autonomous zone” itself. pic.twitter.com/v82Kn3PY78

Not that we’d expect anything less from the mainstream media!

Remember how it was a national story when the small group of armed right-wing people occupied the wildlife refuge in the middle of nowhere? Now, a large left-wing group, some who are armed, has claimed territory in the middle of a city & national media couldn’t be bothered.

I’m not surprised at all by the events in Seattle. Or elsewhere in this nation over the past two weeks. I have been “preaching to the choir,” who seem willfully deaf, since the mid-1980’s, that this country’s lack of knowledge of history and economics, and it’s rejection of the judeo-christian beliefs, principles and values – principles and values written into the greatest Constitution the world has ever seen – would eventually bring a reprise of the French Revolution of 1789, a revolution that spawned every modern socialist Utopian system, from fascism to communism, and began the modern phenomenon of authoritarian governments murdering millions of their own citizens. The various revolutions initially based upon the ideas of Jean Jacques Rousseau, Voltaire and Maximilian Robespierre, have, through those in the 20th century, including Cambodia and Vietnam, murdered over 140 million souls, through eugenic purges, pogroms, starvation, concentration camps, violent suppression of dissenters and war, itself. And, that number doesn’t include the soldiers killed in battle establishing or defending their totalitarian States.

Basically, our schools, especially our major universities, have achieved their goal: a populace who cannot reason, cannot think clearly, based on historical facts and evidence, has no acceptance of an idea of the truth regarding the consequences of accepting certain ideas and beliefs over others. Why some ideas have beneficial consequences for a city, a state, a nation; and why others have the opposite results. Our citizens thus have no means of judging between right and wrong. As Dr. Richard Weaver says, (let the reader look him up,) the root of “the dissolution of the West” is modern man’s denial of universal truth, and his acceptance of “nominalism.”

Due to the dissolution of the Academy as a source of learning, and its transformation into a source of indoctrination, what was once the hope of nations, with a Constitution that recognized the fallibility of mankind, and yet our God-given rights that were to be secured by our government, the United States has, in few short years, forgotten the long and difficult road to equality under the law envisioned by our Founders, and is returning us to a feudal society based on race and tribal allegiance – a “Balkanization” of the society. As our ill-educated, fragmented citizen of western culture now moves into the workforce, and especially our media, social media and government, he or she has no basis for judgement of good or ill, other than emotional reaction to events only half-understood.

Here is a solution. 1. place barricade some 100 feet from their barricade to establish a DMZ and prevent any person from escaping or entering their “Utopia”. 2. Send in ‘Seal Type” undercover agents to deflate tires of cars not from that area in that “Utopian Free Zone” 3. Do not let any deliveries enter except bottled water. 4.Shut down all WIFI and electrical power to those buildings. (By code every building must have 24 hour a battery powered exit light and lighting for stairways and escalators). 5. Shutdown majority of transponders on cell towers. 6. Selectively shut off all water and provide ‘porter potties’ in DMZ adjacent to their barricade.
Just use some creative thinking. Let them have a 30-40 day dietary fast.
If they wish to leave, ensure social distancing in a single file where each person will be fully identified (photo and finger-printed, TSA style frisked with X Ray (knives and weapons etc confiscated) and permitted to make a 2 minute call to their mommy are care giver.
Now smile … that stuff would end sooner than most think.

EXCELLENT. The sooner this protocol gets started, the sooner ….OVER!!

It wont take 30 days more like 3…they are already fighting amongst themselves..homeless supposedly stole their food….actual residents are still in their zone….

Let them starve! They need to get a job! They think they can survive without police help?! Just watch them start eating their own! They will soon find out they cannot survive withoit help from our police! They will get a vile taste of what socialism really is!

It’s almost impossible for them to find jobs – NO ONE is hiring delusional idiots.

IF you do not get rid of this anti AMERICAN ,,ANTI RELIGION , you destroy AMERICAN!!
GEORGE S. AND DEMOCRATS PAVE THERE WAY WITH RICHES AND NO DOES ANYTHING ABOUT THIS.. DEMOCRATS ARE TURNING AMERICA IN TO ANOTHER NAZI WORLD .
JUST AS CARL MAX RUSSIAN AGENDA DEMOCRATS FOLLOW AND USE DESTROY EVERYTHING ABOUT FREEDOM. WE ARE GOING TO END UP WITH NO HISTORY!!!
THIS HAS GOT STOP AT ALL COST PERIOD OR LOOSE OUR FREEDOM AMERICA!!!!!!!!!!!!!