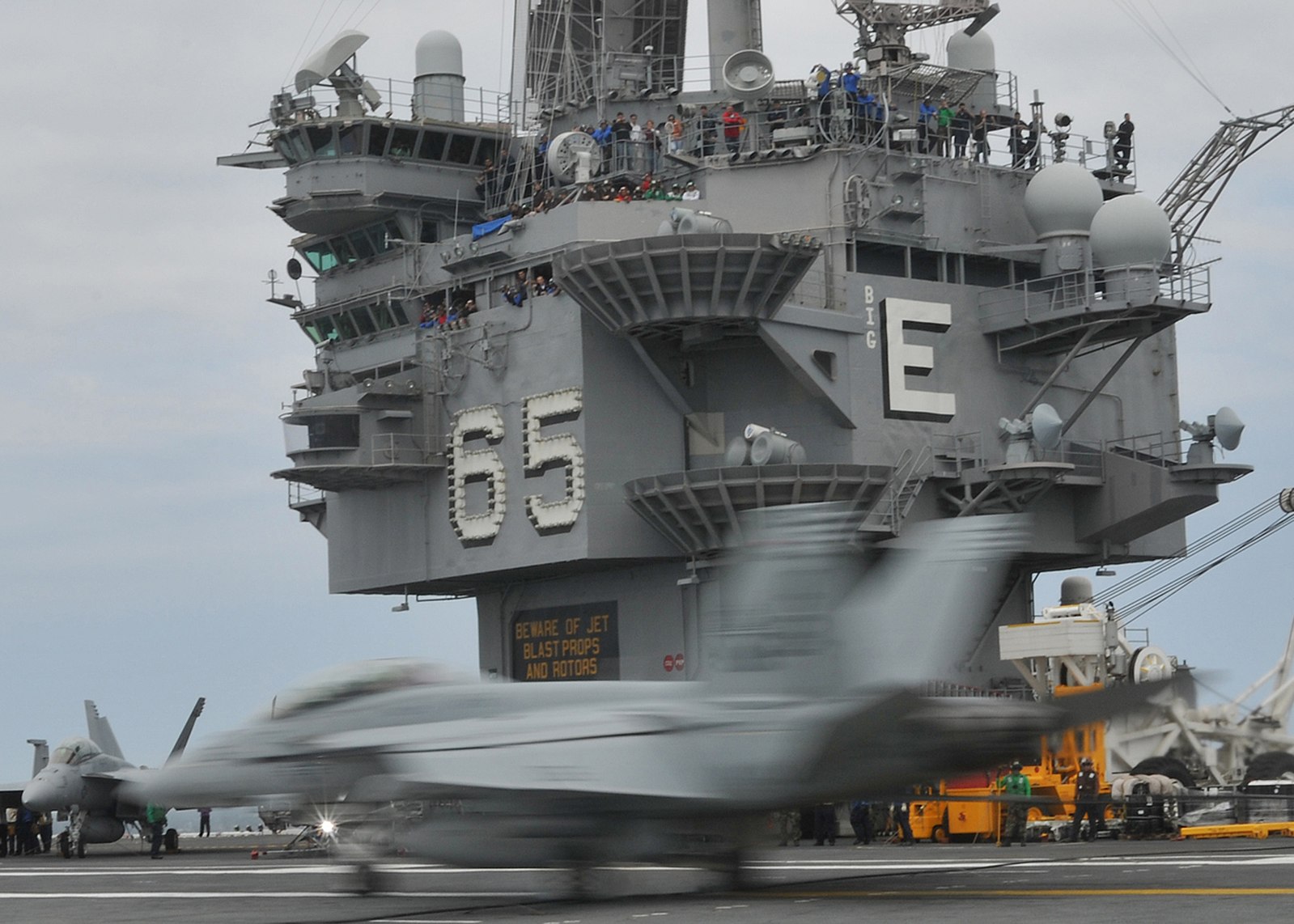 Yesterday, China launched a DF-26B and a DF-21D anti-ship ballistic missile (ASBM) – it also calls “carrier killers” – from two different locations on the mainland converging on one target area in the South China Sea (SCS). This rare double test was a clear response to the U.S. Navy’s recent repeated visits to the South China Sea by several aircraft carriers, as well as the ongoing U.S-led RIMPAC 2020 international naval exercise near Hawaii.

As I have previously written, the USS Theodore Roosevelt transited the South China Sea in March, while last month, the USS Nimitz and USS Ronald Reagan conducted their own rare dual carrier drills with their strike forces operating jointly in the SCS.

With these “carrier-killer” missiles, China believes it can destroy U.S. ships operating in the SCS, including America’s mightiest aircraft carriers. This double missile test was also a reminder, not just to the U.S. Navy, but also to its regional allies who may feel emboldened to join any U.S.-led anti-China alliance.

While its missile capabilities are formidable, how successful China would be in sinking well-defended U.S. carriers is still uncertain.

As Popular Mechanics (PopMech) notes, the DF-21 is a medium-range missile with a range of 1,355 miles, while the DF-26 is an intermediate-range missile with a longer range of up to 2,485 miles. Developed from land-based variants, these ASBMs are now a means of holding U.S. Navy aircraft carriers at risk. PopMech further explains that they –

…are designed to launch from mobile transporters and travel hundreds of miles to attack enemy warships. The hypersonic warhead flies higher and faster than conventional anti-ship missiles, making it difficult for ships without ballistic missile engagement capability to intercept. The warhead is designed to slam into a warship at blisteringly fast speed, then detonate a high explosive or even nuclear warhead.

In anticipation of China’s ASBM launches, PopMech reported that the Pentagon deployed an RC-135S Cobra Ball reconnaissance aircraft to the SCS prior to the missile test. The Air Force RC-135S is a converted Boeing 707 jetliner designed to “collect optical and electronic data on ballistic targets.”

In other words, the Cobra Bell RC-135S gathers data from these missile tests to help improve American ballistic missile defenses.

China illegally claims almost 90 percent of the expansive, and misnamed, South China Sea as its own territorial waters. The U.S. and most other nations vigorously dispute this claim, calling it not only illegal but absurd. They also declare most of the SCS as international waters, and some islands within it as belonging to smaller countries in the region such as Vietnam, Philippines, Brunei, Malaysia, and Taiwan.

To keep the Chinese from steadily encroaching on the rights of these smaller countries, and dominating a major strategic international waterway, the U.S. Navy conducts Freedom Of Navigation Operations (FONOPs) throughout the SCS.

These FONOPS have increased in size and frequency recently as China has become more belligerent and aggressive in its expansion. These Chinese missile launches are just the latest warning to the U.S. Navy to back off.

Unfortunately for China, based on recent actions and statements by the U.S. Navy and the Trump administration, “backing off” does not appear to be a U.S. option.

Blow their hazzes out of the water.

He must have been looking for a very big bang!

Why? What international law did China break or what nation did they attack? Or is it you just want a war with China?

Sadly, I believe we’ll eventually wind up in a military confrontation with China over its claims to most of the South China Sea. But we don’t attack nations until attacked first.

Also, we’ve launched many a missile into the South Pacific, including ICBMs. Were those launches acts of war?

You asshole coward. It would be a destructive war if fought, but fortunately there are those of us with the balls to fight for what’s right and just. After they launched a biological attack on us and the rest of the world you’d think cowards like you would STFU. You democrats continually amaze me. Sieg heil comrade.

That’s exactly correct, the Chinese Communists have already launched a war on the United States. And not just the Chinese Virus either.

Did the Chinese fire missiles at our carriers? Or did they just fart in our general direction? In any case, the economy is getting Dicy. Bring Mfg home. Put masks on the Dem governors, real tight now… yep, a little tighter.

I read somewhere awhile back that the last Great War would be between the Chinese and the Muslims.
Guess the U.S. and even Russia will be out of the picture by then. (Probably by then the liberal leftists have allowed enough Muslims into the country that they’ve already taken over the U.S.)

Don’t know where you read that, but the CCP is definitely turning the screws on Muslims in China.

do you think the jews would let them take it away from them? If you don/t know that you are brainwashed like most of you Jews are running the U s

China launched the WU FLU on the world and brought it to it’s knees and never fired a shot, they need to PAY !!

A. D Roberts
Reply to  alzada

Nope. This “corona” is not even as bad as some of our flu seasons. Read the report by David Horowitz about the previous pandemics. The corona is #18 on the list of bad pandemics.

Exactly ! People need to quite taking their way of thinking from Dems. Get the REAL news from somewhere else besides Lester holt and the evening news a mainstream tv. All lies all controlled by Dems. So sad !

That Recce1 is a real intelligent piece of work .

Destructive war? You have no idea. War with China is the last thing we or China or the rest of the world needs. But punishing them economically and bringing back all of our medical and pharma manufacturing are musts.

A world wide boycott of China and their products !!

A. D Roberts
Reply to  alzada

The chinese leaders actually believe the world is so dependent on their goods that they can go to war with us and we will continue to buy their garbage. Such is what our RICH BUSINESSMEN have done to us and them.

we went over to china to let them make stuff for us cheap and hide steel from 911 before it could be tested for insurrance company payout.

A. D Roberts
Reply to  James

I do believe that Biden used his connection with the Chinese to PAY them to send COVID into the USA. After all. They DID pay for the Steele dossier.

I totally agree with you! There are
always has been and always will be trolling waters just close enough to be legal and yet reminding of whoever’s presence. China has caused huge mass destruction of the world with this viral warfare. They should remember that The United States is still here !

“But we don’t attack nations until attacked first.”

That’s a suicide tenet. Where the hell is that written?

You are right. That is suicide. And that is what Obama did with HIS rules of engagement with our soldiers. That most certainly got more of our men killed. But then, he hates America.

Everything Obama did makes perfect sense when you realize he was never on our side.

Well, lets see, who funded the Viet Cong and NVA? Who funds North Korea? Who KNOWINGLY developed a pandemic and released it on the world and denied that it was contagious? Who launches cyber attacks against the U.S. on our defense systems, politics, technology, science on a daily basis? The Chinese have already laid the groundwork for the U.S. to react.

What you said plus. The USA saved China during WWII by defeating Japan who had over run China. Their memory is short and not to thankful either.

its hard too ignore or deal stupid people.

Missiles launched from VANDENBERG AFB are into the Pacific Missile Range. Zero commercial vessels are within that range. China launched missiles into a major shipping lanes for world commerce. 100,000 ships pass through annually. A totally different safety issue.

Recce, I understand. These Chinese provocations should not lead to war. We should follow the defund police movement and send some social workers and a basketball player to calm things down

Funny, but seriously could we send some of the social workers and basketball players there?

How about the whole NBA to China !!

More than basketball players. After this last week, send ALL sports players. Just after you cut off ALL their pay.

So,when are you moving to China?

Please tell me you are a Chinese propagandist working for them and not an American. China is not only a bully to all of SE Asia and belligerent to any one who does not kowtow their line, they are racist and murderers of ethnic groups and anyone in opposition to their strict government control and claim for the entire SCS where international commerce is essential. Control the SCS and you control the world’s economy. Only if we and other nations become intimidated by them will they dare attack our and others ships. We can look no further than Hitler being given the same concessions by Europe to understand the outcome.

You have not been paying attention. But then, you probably stuck with your head in the sand. I bet you believe that Biden did not use his office and position to kick the prosecutor out of the Ukrainian government too.
PATHETIC.

Ban all trade with Communist China.