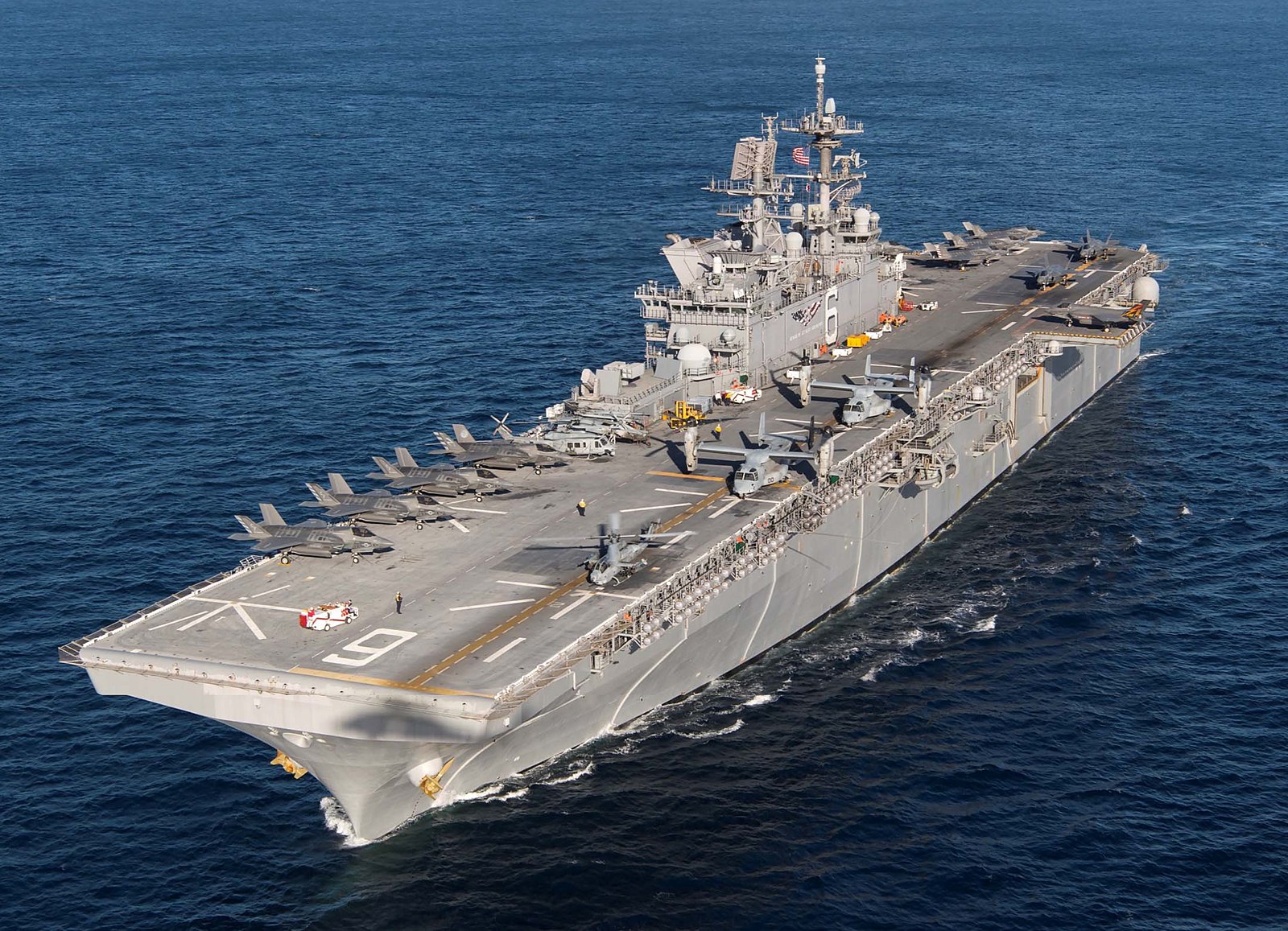 While the US Navy evaluates the potentially catastrophic damage to the fire-ravaged Wasp-class amphibious assault carrier – the USS Bonhomme Richard (LHD-6) in San Diego, it has now also received its newest America-class air assault carrier, the USS Tripoli (LHA-7).

The impressive new ship’s timely commissioning is a slight consolation considering the severe impact of losing the Bonhomme Richard may have on the Navy’s plans to expand aviation assets in the Pacific to counter China – which I described earlier.


The ship was commissioned in a low-key virtual ceremony last week. Tripoli will be based at San Diego Naval Base, California, along with the damaged Bonhomme Richard. Task and Purpose reported the commander of the Expeditionary Strike Group 3, Rear Adm. Philip E. Sobeck’s, commissioning remarks:

Congratulations to Tripoli’s crew for all of your hard work, amidst these challenging times, to reach this milestone. We welcome you to the amphibious force of combat-ready ships and battle-minded crews to go to sea and support sustained combat operations.

Task and Purpose also notes that the Tripoli is the third Navy ship of that name commemorating the Marines’ victory – along with soldiers from 11 other nationalities – at the 1805 North African Battle of Derna, during the First Barbary War. This victory was later memorialized in the Marines’ Hymn with the line, “to the shores of Tripoli.”

The USS America, and USS Tripoli, on the other hand, eliminated the ability to land Marines by sea, opting instead to significantly beef up the ship’s aviation capabilities by increasing its hangar, aviation support services, and the amount of aircraft fuel and munitions the ship can carry. The Tripoli, like its sister ship the America, are the first US ships designed from scratch to fully support F-35B Lightning IIs.

The Bonhomme Richard was completing a needed two-year, $250 million upgrade to fully integrate the vertical/short take-off and landing (VSTOL) F-35B jets – the Marines’ version of the Joint Strike Fighter.

Due to its aviation-centric design, the Tripoli is capable of acting as an ad hoc aircraft carrier – or “Lightning Carrier” to provide extra carrier-based firepower. As I described earlier, its sister ship America was recently operating with an Australian Navy frigate in the eastern Pacific with 13 F-35Bs on her flight deck, more than twice as many as normally embarked.

Despite this, the Navy has since re-evaluated its decision to make America-class LHAs only aviation capable. The US Naval Institute notes that the Tripoli, “will be the last in the class to be built without a well deck. As part of a redesign of the America class, the next ship, Bougainville (LHA-8), will include the well deck and capability to launch surface connectors to bring Marines ashore.”

This should continue to allow the ships to serve as F-35B Lightning Carriers, while maintaining a sea launched ship to shore capability as well.

While we wait to understand the full impact of possibly losing the USS Bonhomme Richard, it’s good to know that the USS Tripoli is now ready to deploy to the Pacific to face China.

Meanwhile, all of this cash is being invested into archaic technology and warfare tools that have no practical use for our country. And while our ships are burning or crashing into one another off the coast of Singapore, Chinese and Russian hackers are doing more damage than a potential nuclear threat. Time to wake up and join the 21st century.

Are you really that STUPID? There is a lot you don’t know, butterfly. Let’s hear your plan.

I hope that they have a Better FIRE Suppression system on that new carrier, than the one that burned in port….

Maybe instead of worrying about fire suppression it might serve the Navy well to suppress those of devious motives from serving on AND maintaining warships while in port.

There is a lot we don’t know about the Bonhomme Richard incident. And there’s a lot the Navy is NOT telling us.

Another example of our weak military, despite getting the majority of our tax money since WW2. Decades of wasted taxpayer money on a limp and ineffective system of protection for its citizens. A vast alternate welfare state. If you truly believe there are devious motives at hand here, question the ability of the Navy to protect itself in a friendly port. If it can’t do that, there are far bigger problems.

Another Fruit-Loop Dem. spews his Ignorance!