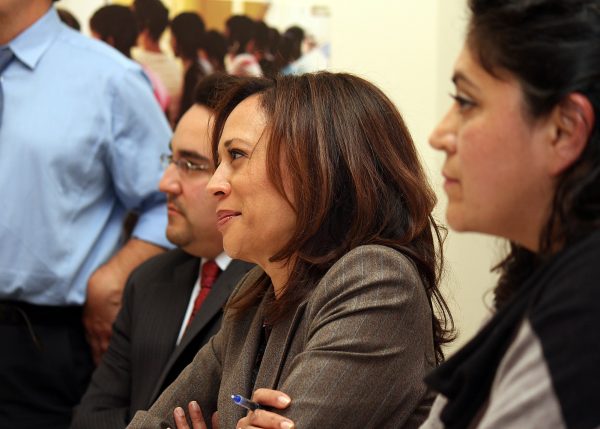 Office of the Attorney General of California via Wikimedia Commons
| AAN Staff | Government,Politics | 0

Early in Joe Biden’s presidency, President Biden appointed Vice President Kamala Harris to border security, a responsibility that she has not been taking to the level of seriousness that people would’ve hoped. Kamala Harris didn’t visit the southern border for months on end at times, and rarely ever visits the southern border. While illegal immigrants cross the United States’ southern borders by the thousands per day, Kamala Harris defended the security at the border, then claimed that issues at the border are a result of Trump’s administration. While the White House is denying claims of illegals walking into the country, the evidence of nearly 2 million illegal immigrants coming through the border since the start of Joe Biden’s presidency says otherwise.

Vice President Kamala Harris twice declared the U.S. southern border is “secure” during an interview Sunday, despite the tens of thousands of illegal immigrants who routinely cross into the country every month.

During an interview on “Meet the Press” aired during the 21st anniversary of the Sept. 11, 2001, terrorist attacks, Harris was asked by NBC News anchor Chuck Todd whether the border is secure. The vice president responded that the immigration system was “broken” under the Trump administration and still “needs to be fixed.”

“I think that there is no question that we have to do what the president and I asked Congress to do, the first request we made: pass a bill to create a pathway to citizenship,” Harris said. “The border is secure, but we also have a broken immigration system, in particular, over the last four years before we came in, and it needs to be fixed.”

Todd pushed back against Harris’ claim about the border being secure.

“We’re going to have two million people cross this border for the first time ever. You’re confident this border’s secure?” Todd asked.

“We have a secure border in that that is a priority for any nation, including ours and our administration,” Harris replied. “But there are still a lot of problems that we are trying to fix given the deterioration that happened over the last four years. We also have to put into place a law and a plan for a pathway for citizenship for the millions of people who are here and are prepared to do what is legally required to gain citizenship.”

Harris, who was visiting the Lone Star state last week for a number of events, was put in charge of tackling the border crisis by President Biden shortly after they assumed office in 2021.

Meanwhile, the number of migrant encounters at the southern border has smashed through the two-million mark this fiscal year, breaching the already-historic 1.7 million encounters last year, as Border Patrol agents deal with a migrant crisis unprecedented in U.S. history and one that the Biden administration has so far failed to slow.

Still, the White House is trying to paint the border crisis as under control. White House press secretary Karine Jean-Pierre came under fire last month after she claimed people were not walking into the country illegally.