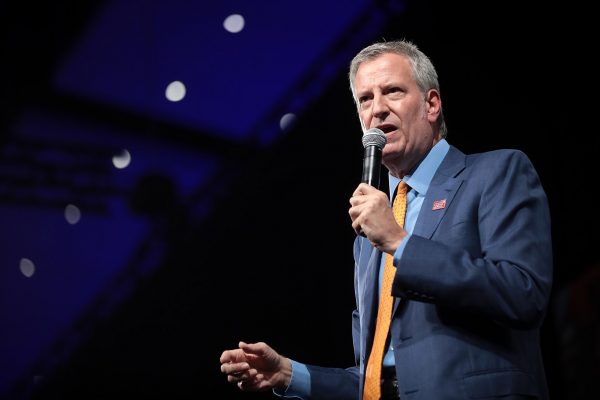 New York City restaurants and businesses filed a lawsuit against Mayor Bill de Blasio for requiring patrons to show proof of vaccination prior to entering gyms, music venues, restaurants, and more within the city’s limits.

The lawsuit alleges that the mandate unfairly targets select establishments like diners, bars, and movie theaters, but exempts grocery stores, schools, and churches amongst others, therefore is a violation of their constitutional rights.


Court papers filed on Tuesday in the Staten Island Supreme Court say that the mandate does not accommodate vaccination exemptions for those who are allergic to the vaccine, have high-risk pre-existing conditions, have already contracted COVID-19, and people who cannot get the jab due to religious reasons.

“The decision to get the vaccine should ultimately lie with the individual and his doctor, who knows that persons’ complete medical history, rather than a politician,” the lawsuit alleges. “The mayor implemented even more arbitrary executive orders, trampling more recklessly on constitutional rights.”

Court documents also say that the mandate makes it “impossible for anyone who chooses not to be vaccinated for whatever reason, to work in the designated industries.”

De Blasio said that the mandate is “about public health and safety. We’re absolutely certain this is the way to achieve those goals. “Do it in a smart way, a fair way, based on the data and the science.”

He also commented that the city Law Department has “tremendous confidence” that they have legal precedence for the mandate, which the lawsuit seeks to block through a preliminary injunction.

Now run home to your wife, she is probably enjoying her girl friend while you waste your time trying to scam people here .

I’m sure he’s exempted himself from all lawsuits.

The people’s will must be done. He needs to go be vor a military court martial. That said, do we think that Miss Priss the VEEP will be any better. Oh right…she giggles much better than Biden. YUK

It won’t take rocket science to understand we’re being conditioned to function under a regime. It was a stark revelation when those human ‘microchips’ were unveiled, which Odumbo was vying to mandate that Americans would be injected with those gizmos by his unilateral authority. If there’s one thing we don’t want, it’s the government being under our skin.

You mean LITERALLY, of course___ as they are Already and Constantly under our skin!

I agree with you David. I resist, renounce, rebuke all strongman spirits, all Jezebel, Baal , principalities, antichrist, unclean, Socialism, Tyranny, Deceitful, lies mind control, death, destruction, Belial spirits, all connected spirits operating in DeBlasio, The DncDemocrats Biden-Harris Pelosi, Schiff, Waters, Schumer, Newsome, Cuomo, Obama Rice-Regime and Everyone who is connected-partnered with these INCREDIBLE GREAT WICKED Unjust deeds. I command all spirits to be dismantled, powerless, Go into the Presence of THE HOLY GHOST NOW. I loose ALMIGHTY GOD’S outstretched Right Hand-Strong ARM to crush, strike, Destroy All evil strategies, unseen plots schemes,lies, DECEPTION, cover ups, conspiracies working against GOD’S PLANS for AMERICA-ISRAEL-THE EARTH. “GOD Will rule against the wicked and Destroy them with The BREATH of HIS MOUTH. GOD Will be clothed with Fairness and Truth.” (Isaiah 11) I agree with GOD’S PLANS for AMERICA-ISRAEL-THE EARTH. I Decree in JESUS NAME 🔥