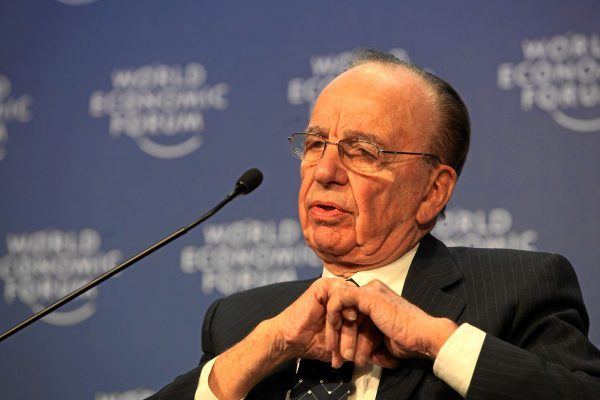 Ever since election night 2020 there has been controversy about Fox News’ decision to call the state of Arizona for Joe Biden, in spite fo the fact that many of the votes weren’t in and no other network had yet called the state.

But according to the new book “Landslide: The Final Days of the Trump Presidency,” the person responsible for the notorious call was none other than Rupert Murdoch, the owner of Fox News himself.

In the book “Landslide: The Final Days of the Trump Presidency,” Rupert Murdoch told his son Lachlan Murdoch, the CEO of Fox Corp., to project Biden as the winner of Arizona, Insider reported.

“Lachlan got his father on the phone to ask if he wanted to make the early call. His father, with signature grunt, assented, adding, ‘F— him,’ ” Wolff wrote in the forthcoming book, a copy of which was obtained by Insider.

Fox was the first major network to call Arizona for Biden.

The book said the decision angered the Trump campaign, which was feeling confident they would emerge victorious on election night.

If true, does this make Rupert Murdoch the true villain of election night 2020? Let us know what you think in the comments below.

Donald TRUMP is the POTUS! KAG!

This online job is best for students. Because no experience is required. Check this then make your decision. Boom..Check this…..>netjob1.cf

That’s why Fox ratings are down. Karma

I often wonder why anyone would watch television offerings these days, particularly content that advances more liberal concepts such as Gay Rights, or Globalism and Proxy Wars. This is propaganda, and unless people know what they’re looking at, they’re being conditioned to accept the advancement of culturally destabilizing, government expanding, liberal ’empowering’ Globalist/Marxist pabulum.

Fox News has gotten what they deserve. Everybody should stop watching. Use to be my favorite. I don’t even turn to that station anymore, and will not.

OAN is even better.

LS, I agree with you. They just give you the news and not trying to be personalities. AND you don’t have to hear Hannity and his inane repeats of his jobs as a kid.

I haven’t watched fox since they helped steal the election. I watch newsmax but sometimes I wonder about them

Television, like everything else the leftists touch, has been ruined.

screw them f’s and all

President Donald J. Trump is our duly elected president.The United States of America is operating under a fraudulent imposter.

You mean we’re operating under a Regime.

Your horns are showing, you Godless Heathen!

Nah I am an AMERICAN. NO CATHOLIC TRAITOR is an American. All CATHOLICS are traitors.

It appears you have some kind of mental illness. Ranting like a nut nobody is going to agree with you.

You must be one of the CATHOLIC TRAITORS

Biden is a detestable person but it has nothing to do with being Catholic! The Church has opposed his views on abortion, etc. Your comments about Catholics show how ignorant and bigoted YOU are!

Bigot: a person who strongly and unfairly dislikes other people. Note the word UNFAIRLY.
Observation of proven failure forever is not ‘bigotry’. This would be observation, not bigotry.
Observe and then decide if you are voting for a destruction of the USA.
Questions to ask yourself:
How many successful CATHOLIC “C” nations are there? Proven failure is a factor in future projections.
Save the USA! Vote wisely, not by knee jerk dogma and propaganda.
Give me a nice long list of a successful CATHOLIC “C” nation … Hey, you have a hundred to choose from all just south of the USA.. A hundred nations, a thousand years and exactly 100% failure! . I am waiting.
Vote for ANY CATHOLIC “C” and you vote for failure forever.

Then you would be the bigot here, hypocrite.

Hey name me one successful CATHOLIC nation. you have a hundred to pick from just south of the USA. I am waiting.

Alfie, are you mad that your dad breast fed you?

Carlo, CATHOLICS seem to just come out of the woodwork, just like cockroaches.

Nothing to do with which religion! It has to do with belief in Jesus! The enemy is trying to tear this nation down from the inside out! Marxist agenda folks!

The Biden-Harris Regime and Dumpster Fire.

They’re doing what they want to do in Washington, because their party dominates congress, the courts, the White House, and most importantly, the media. There’s still a Constitution they must adhere to, but the bulk of liberal politicians employ Latin (’cause they’re lawyers..) to make tyranny sound so palatable.

CATHOLICS do not need to follow any stinking Constitution! They have the SCOTUS behind them. SCOTUS is CATHOLIC. SCOTUS decided that corporations are ‘people’ and can put as much money as desired in any ‘candidate’. Biden is CATHOLIC. The Vatican corporation put billions and every dead CATHOLIC voted for Biden by way of the CATHOLIC voting machines.

Oh his shut up already! You’re stupid comments have nothing to do with this article.

I don’t trust ANY news media, including FOX. DICTATORSIP. CONTROL. That’s what the dems want and if we don’t fight back, we are much closer to being under this type of rule. AMERICA! Where did you go? You’ve lost your way! We must fight to get you back and on the RIGHT track.

You’re correct. The Framers did their level best to ensure our leadership would not expand to usurp the civil rights of Americans, nor seek to cast off the limitations specified in our nation’s charter. Americans don’t realize that we’ve been given the authority to remove politicians and/or government officials who ignore their limitations. Numb Nuts parading up to the podium to inform us that he will disarm Americans is a very profound example of what our ancestors vowed to prevent. Only an idiot (See “Liberal”) would wax enthusiastically about such a prospect.

Biden is CATHOLIC….NO CATHOLIC “C” is an American…. ALL Catholics are traitors…. There are two sides to a coin, heads, tails. There is The USA OR the Vatican…. The Constitution OR the bi-babble… the President of the USA OR the pooopie…. .. they are opposite and not compatible… ALL CATHOLICS make the CHOICE of being an American OR a CATHOLIC TRAITOR supporting the Vatican, a foreign, hostile NATION that destroys all nations it touches. /..R and D mean nothing. ..

He’s not a Catholic.