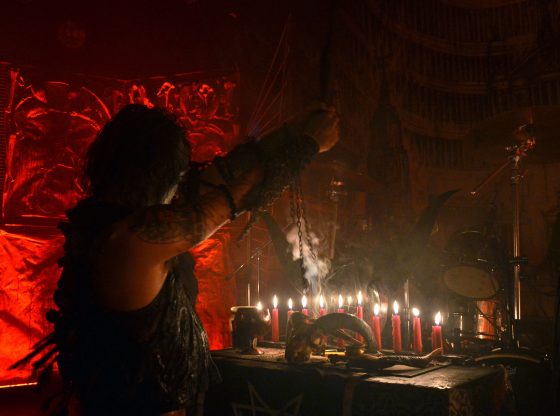 A Satanic church is suing the state of Texas for the right to perform ritual abortions.


The Satanic Temple is suing on behalf of an anonymous Texas woman, arguing the state’s medical restrictions on abortion interfere with her religious beliefs.

The suit claims a mandatory sonogram and 24-hour waiting period violate two of the Temple’s seven tenets, which claim “one’s body is inviolable, subject to one’s own will alone,” and “beliefs should conform to one’s best scientific understanding of the world [and] one should take care never to distort scientific facts to fit one’s beliefs.”

The suit claims the restrictions interfere with their own rituals regarding abortion, which they claim are intended to reduce the shame associated with the procedure.

“The ritual goes like this,” spokesman Lucian Greaves explained. “Before the abortion takes place … a member of The Satanic Temple will look at her reflection, be reminded of her personhood and responsibility to herself, take deep breaths, focus on her intent and make herself comfortable. When ready, she will say the third and fifth tenet of the temple aloud.”


The third tenet declares “one’s body is inviolable” while the fifth claims “one should take care never to distort scientific facts to fit one’s belief.”

After an abortion, Greaves says “the woman would return to her reflection and cite her personal affirmation: ‘By my body, my blood. By my will, it is done.’”

While the group uses the “Satanic” name, they are technically atheists.  Many atheists claim to be “Satanic,” but don’t believe Satan exists. They use the “Satanic” label and perform “rituals” for shock value and to mock Judeo-Christian beliefs and rites, not believing it has any actual effect.

A View from Guatemala: Enforce Immigration Laws While Showing Love to Our Neighbors
Kentucky Secretary of State Demands Democrats Apologize for ‘100 Years of Voter Suppression’

Why don’t they start their rituals with Numb Nuts?

Then they can take all the squad and fix them and the rest of the democrats so none of them can conceive. Cause none of them want anyone else to conceive they want all our children dead one way or another they they can do it to all the illegals they catch or any at the borders

If you listen to PJW, he’ll describe how men are losing their reproductive capabilities. The Godless hubris of these murderous “Globalist” potentates has been demonstrated time and time again, as they seek to slaughter scores of hapless populations. Only stupid liberals would be ignorant enough to subscribe to such inhuman campaigns.

They will have the support of the commiecrats

Perhaps they can ask Mexico to sell them one of the active volcanos so they can make themselves feel even more powerful when they jump down into it to kill their innocent unborn babies.