The Man Who May Be America’s Most Corrupt Politician Resigns 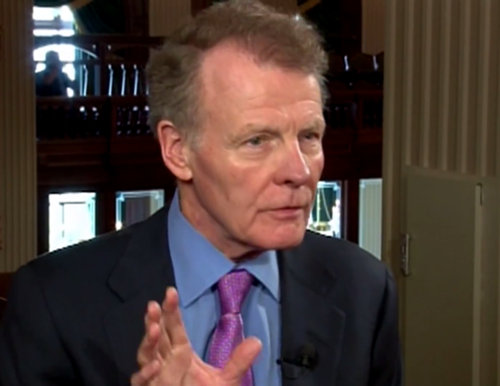 The man generally considered the most powerful and possibly the most corrupt politician in Illinois abruptly resigned his seat in the state legislature Thursday after being denied another term as Speaker of the State House of Representatives.

Michael (Mike) Madigan, who for years has ruled the Illinois Democratic Party and political machine with an iron hand said he would give up at the end of February the seat he’d held for half a century as concerns mounted over what the Chicago Tribune called “a sprawling federal corruption probe” into events in which it has been suggested Madigan may have been involved.

The scandal that eventually brought the powerful Democratic leader down erupted after federal prosecutors said leaders of Commonwealth Edison had bribed Madigan associates in exchange for help from his political organization passing legislation deemed favorable to its interests. One of those most closely involved in the scheme was former state representative and ComEd lobbyist Michael McCain, whom the Tribune described as being “One of Madigan’s closest confidants.”

Madigan has repeatedly denied any knowledge of the scheme. Nonetheless, it is the straw that broke the camel’s back of a career that saw him looming large over every aspect of Illinois politics. More than a handful of his Democratic colleagues cited the scandal as the reason they could not vote to give him another term as Speaker.

“It’s no secret that I have been the target of vicious attacks by people who sought to diminish my many achievements lifting up the working people of Illinois,” Madigan said in a statement. “I have been resolute in my dedication to public service and integrity, always acting in the interests of the people of Illinois.”

His speakership, which began in 1983, lasted nearly 40 years and is one of the longest on record anywhere in the United States. Before his colleagues declined to re-elect him, the closest he ever came to losing his grip on power came in 1994 when, as part of the Contract of America election the Republicans won control of the Illinois Legislature for a single term.

His replacement as Speaker, Rep. Emanuel “Chris” Welch, is seen as a Madigan loyalist who, in a statement thanked him for his “sincere and meaningful contributions to our state.”

“Under him, we’ve had strong, sustained Democratic leadership in Springfield,” Welch said, referring to the legalization of same-sex marriage, the Chicago Sun-Times reported, and the abolition of the death penalty, which began in earnest under former GOP Gov. George Ryan.

“Now we must build on that with a new generation of leadership focused on racial and gender equity in all dimensions, improving government transparency, and leading with the kind of conviction, compassion, and cooperation expected by our constituents,” Welch continued.

Big labor leaders whose alliances with Madigan were the source of his power also complemented the outgoing Speaker. Chicago Federation of Labor President Bob Reiter called him a “steadfast, dedicated, and courageous champion of workers and their families in Illinois for a generation,” the Sun-Times reported.

Despite his resignation, Madigan remains a significant player in Illinois politics – at least for the time being. He spawned a political dynasty that includes his adopted daughter Lisa, the Illinois Attorney General from 2003 to 2019. He will remain chairman of the Illinois Democratic Party and will continue to be the Democratic Committeeman for Chicago’s 13th Ward which, according to published reports, gives him an outsized role in picking his successor.

The federal probe into state corruption and any possible role Madigan may have played in it is expected to continue.

A crooked politician? Say it ain’t so! (sarc)

And in Illinois no less, hmm.

One down, thousands of corrupt democrats to go.

Out with the whole lot of crooks

OMG I never thought I would live long enough to see the day this corrupt POS went down. Ding Dong the Witch is Dead….