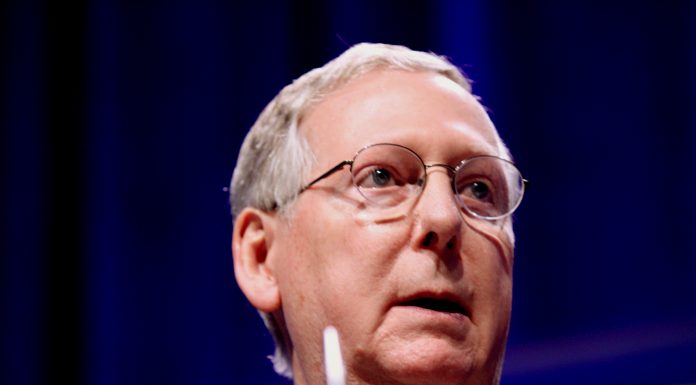 The $300 billion coronavirus relief bill failed to pass in the Senate on Thursday, most likely squandering any chance of additional coronavirus relief before the November election. The legislation needed 60 votes to advance, the final tally being: 52-47. Every Republican voted “yes” except for Senator Paul Rand who joined with the Democrats who unanimously voted in opposition to the bill.

The proposed bill included a second round of the Paycheck Protection Program to small businesses and an extra $300 a week in unemployment benefits through December 27.

Every Senate Democrat just voted against hundreds of billions of dollars of COVID-19 relief. They blocked money for schools, testing, vaccines, unemployment insurance, and the Paycheck Protection Program.

Their goal is clear: No help for American families before the election.

In a report from Fox News:

But the bill contained two things that Democrats panned as “poison pills:” McConnell’s liability protection plan that would limit lawsuits against businesses and schools from people who contract COVID-19 on their premises and at least $5 billion for school choice initiatives to help parents fund private schooling.

Senate Minority Leader Chuck Schumer, D-N.Y., blasted the skinny bill as “emaciated” and said he hopes bipartisan talks could resume. He said Treasury Secretary Steven Mnuchin and White House Chief of Staff Mark Meadows “may be forced to return to the table” to strike deal with Democrats because the coronavirus is the issue Americans care most about during this election year.

The White House and House Speaker Nancy Pelosi, D-Calif., and Schumer, D-N.Y., had been in talks this summer, but they haven’t been able to reach a deal. President Trump accused Democrats of being unwilling to give him a win before the presidential election, whereas Democrats have accused the White House of not understanding the gravity of the crisis as they demand a giant spending package.

Americans are not enemies. COVID-19 is our enemy. It's time for Washington Democrats to act like it.

Throughout battling the coronavirus pandemic Congress has been able to pass four bipartisan bills to provide much-needed relief to Americans. However, Democrats now are refusing to settle for any legislation less than $3 trillion.

Supreme Court Justice Ruth Bader Ginsburg has died. The Associate Justice passed away from complications due to metastatic pancreatic cancer. She was 87. Ginsburg had...
Read more
Government

Princeton University is universally recognized as one of the world's most prestigious institutions of higher learning. However, the Ivy League school, like the rest of...
Read more
Government

Democrats are idiots! They want the US to drown in debt, no matter what.

As I have always said, the anti-American democrats will sacrifice every single American citizen regardless their party to advance their agenda of communism.

Not “Paul Rand” but Rand Paul.

The democrats like pelsoie don’t give a crap about American famlies..////all she wants to do is stall,stall.stal…load the bill with her wish list…so she can eat her $13. a pint icecream and to hell with the worker trying to feed their kids.

The Democrat Party actually are the enemy of all that is good in The United States of America. They want to heart the American Citizens just so they can get what they want and what they want is all that is bad for all Americans. Like Socialism that just like Venezuela socialism is what killed a one time very wealthy Country. That is what these evil Democrats want for our great Nation.

If you vote for any Democrat you are voting for the death of the great American Nation. Remember the Democrat Party is the party of Treasonous Anti-American Criminals.

The communist scumbag democrats don’t give a hoot in hell about the good and decent patriotic American citizens! They hope we starve to death so they can run in and give us a mouthful of food so that we will vote for them

There has been NOTHING quiet about this…. The Communist party Officials behind this…. have nothing better to do than to attempt to destroy America…. By any means necessary…. Including Harming the very people whom elected them…. in Favor of Illegal criminal aliens…. In favor of Islamic terrorists like Ilhan Omar…. in favor of communists like AOC, Nasty Nancy peeloser, chuck the schmuck schummer, and in favor of other domestic terror organs like BLM, Antifa, and criminal organs like the Dnc.

Great! The down-ballots are gonna be really fun for these demon(c)rats…

I absolutely hate all DemocRATS!

I grow up in communist country and was a nightmare and all of it its coming back all the prosecution and beating I want to tell everyone do NOT VOTE COMUNIST CROOKS IN POWER THEY WILL TURN THIS COUNTRY INTO CHIANA IN NO TIME AND THE COMMUNIST ARE PROMISING YOU ALL EVERYTGING BUT AFTER THE ELLECTION WILL TURN INTO A TOTAL DICTATORY GERIME AND THEY WILL TELL YOU what you eat say and when to go look at CALIFORNIA nd other communist demoncrats stare and you are going to see what will come after the election and this is nothing they are very dangerous and violent party …U can see they do not CARE FOR AMERICAN CITIZENS THEY ARE SUPORTING THR TERORIST ANTIFA BLM GANGSTERS AND THE JIHADIST IN OUR COUNTRY ,WE HAVE IN OUR CONGRESS 4 OF THEM AND THEY ARE THE ONES THEY ARE DICTATE TO THE COMUNIST DEMONCRATS HOW TO TORTURE OUR COUNTRY

The communists, nazis and muslims are the murderers, liars and terrorists who try to destroy the US and the whole world. They must be defeated.
Nazis lost their power after 5 years, after 70 years, but there are still enclaves like Venezuela, Cuba.
Now you have in Europe still countries like Sweden, Portugal, Spain, Italy Belgium,
Germany, France and even Britain that are “socicalists” or “liberals”(the euphemism of communism) and now the new evil islam

This is exactly how you turn a country into a Socialist society, buy giving handouts . The American people Need to be working …. people have got to defy the idiotic orders of their Governors and city and state officials and “ Open up your business” go back to working in your companies . I feel that people really need the money and the help, but can’t get dependent on the money.

Good bye Democrats, relief bill will be your death, shows the people you Democrats don’t care about the people.

Should McConnell push for a new Supreme Court Justice nomination BEFORE...