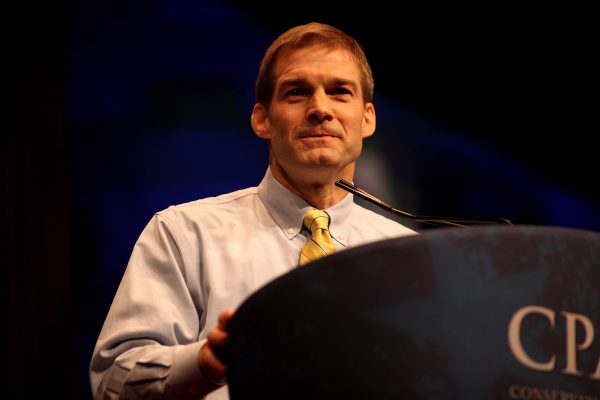 Ohio Republican Jim Jordan appeared on Fox News to discuss his ideas for FISA reform in the wake of calls for improvements following FBI agents’ misconduct while investigating Trump campaign aides and associates.


Jordan is the Ranking Member on the House Judiciary Committee. The congressman is a leading sponsor of the reformed-minded USA Freedom Reauthorization Act of 2020. (Fox News)

The bill, last month, then returned to the House, with lawmakers poised to consider an amendment and pass the package with bipartisan support. The legislation at first was supported by GOP lawmakers including Jordan as well as House Speaker Nancy Pelosi, D-Calif., and Attorney General Bill Barr.

But then President Trump weighed in, urging opposition “until such time as our Country is able to determine how and why the greatest political, criminal, and subversive scandal in USA history took place!” With Trump calling essentially for further examination of the Russia probe, the bill was tabled and lawmakers moved the effort to conference committee, which is meant to resolve differences and strike a FISA deal that can pass both chambers.

FISA reform became a priority for both Republicans and Democrats following a review from Justice Department Inspector General Michael Horowitz, who revealed significant inaccuracies and omissions by the FBI in a FISA warrant application to surveil former Trump campaign adviser Carter Page in 2016.

Some examples of reform Jordan has proposed include the appointment of an adviser to represent all U.S. persons targeted by FISA if they are a federal office holder, a political candidate, a campaign employee or volunteer, or part of a media organization — unless there is probable cause showing they have engaged in espionage, terrorism, or proliferated weapons of mass destruction.

The Unconstitutional actions the FBI showed are entrenched too deep. Better to disband the Bureau and start over with clear Legislative and Executive oversight.

Now maybe Jordan knows more than the specialist on the subject, now the FBI IG had a full invesigation and said only that 17 minor infractions were found an that none of them would have changed the outcome of the investigation. Now when the FBI discovers that5 a Presidential campaign is having multiple contacts with Russian Inttelligence agents, thya re suppose to just roll over and sy, “SO WHAT< NO SKIN OFF OF MY NOSE." Now I wonder how Jordan would feel if the FBI investigated a Democrat who was in contact with the Russian intelligence agents, I o not trhink he would have a problenm with that in any way. The problem with the politics in this USA is everyone wants to be hard nosed and does not want to compromise on any thing, and the ones in the Republican party who are ready to set sdown and comprimise on a subject gets Trumps wrath, so nothing goes any place it started with the Republicans during Obama, where they would not talk about anything that was not totally in their corner.