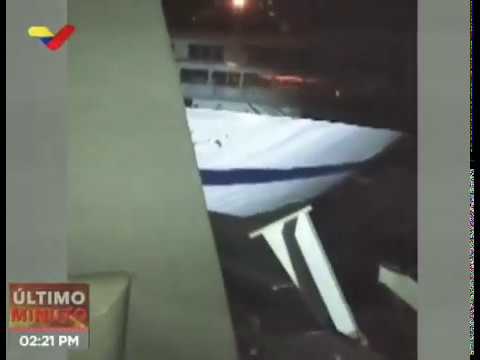 As an armada of US naval and military forces deploys toward Venezuelan waters on enhanced “counternarcotic” operations ordered by President Trump, the Venezuelan Navy has already suffered its first casualty. On March 30 the ANBV Naiguatá (GC-23), a Venezuelan patrol vessel, armed with a 76mm main gun, as well as a pair of 20mm cannons and two .50 caliber machine guns, sank after attacking the unarmed Resolute, a Portuguese-flagged cruise ship en route to Curaçao, a Dutch island in the Caribbean.

According to The Economist, the Resolute “had been drifting for a day in international waters near La Tortuga, a Venezuelan island, as it tinkered with its starboard engine.” At midnight it was approached by the Naiguatá and ordered to come into port. The ship, believing it would be illegally seized by Venezuela, refused. Shortly thereafter the Naiguatá opened fire and rammed the cruise ship.

Unfortunately for the Naiguatá, the Resolute’s placid appearance belies the fact that its strengthened hull, built for polar cruising, can smash through metre-thick ice—and, it turns out, puny patrol boats. The Resolute brushed off the collision with “minor damages”, whereas the Naiguatá rapidly took on water and sank, leaving 44 sheepish sailors to be rescued.

Venezuela disputes this account. Its armed forces accused the Resolute of “cowardly and criminal behaviour” by initiating the collision in Venezuela’s national waters. The Bolivarian navy insisted that its gallant sailors put in an “impeccable performance” against the unarmed cruise ship, presumably by sinking with particular panache.

The navy darkly added that the Resolute, which boasts a jacuzzi and sauna, might have been carrying mercenary commandos to attack Venezuelan bases. As evidence, it pointed to nefarious inflatable boats on its deck.

The Venezuelan Navy later released a heavily edited video, posted by The Drive, that shows a Venezuelan seaman firing an AK-47 at the ship and then the two ships impacting, with the patrol boat quickly taking on water.

Video released by the Venezuelan Navy shows them shooting at the RCGS Resolute cruise ship then it shows the Resolute impacting the side of the GC-23 Naiguata and it shows severe damage to the Naiguata #Venezuela pic.twitter.com/ciI15v6SDt

This tragic-comic incident should demonstrate the decrepit state of Venezuela’s naval and military capabilities after two decades of corrupt, incompetent leadership by the Hugo Chavez and Nicolas Maduro “Bolivarian” socialist regime. If this warship sinking is any indication, Maduro should be very concerned about US forces headed his way.

Typical communist lying response: try to make themselves look heroic even when the facts are obviously to the contrary. They don’t seem to even care that they come off as the liars they are – they just boldy deny deny deny, as if to say “ok, so we lie. So what? Besides, we are the ones to decide whether it’s a lie or not, and we say not”, which is basically the same philosophy they ‘govern’ with.

This is exactly what the liberals / democrats do all the time. Aided by the Fake Media, they continue to lie even when it becomes clear what the truth actually is. Think Pelosi, Shumer, and Biden.

You beat me to it…communists are the same the world over.

They always can count on their “media” running interference for them.

Now that was cute – Maduro is so desperate that he doesn’t even investigate what he considers his enemy – he may’ve done an edited account of the scuffle but the truth remains that Venezuela sank and the world won’t let Maduro forget it.

Dive make your depth 150 feet, ahead 1/3, 2 degree down bubble, chief of the watch Flood all Ballast tanks.