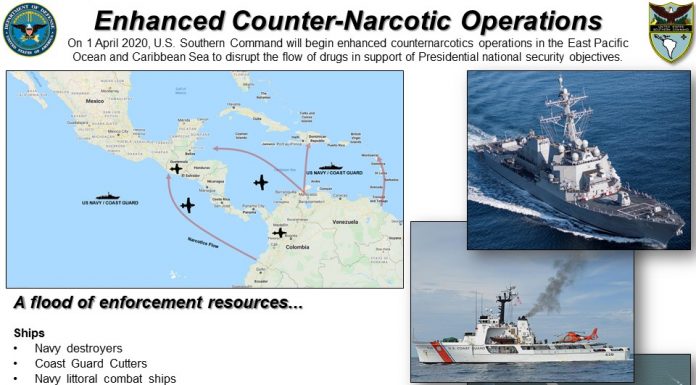 Last Thursday, President Trump announced he is sending military forces and warships to the Caribbean to combat the illegal drugs coming from Venezuela that also enrich its corrupt regime. “We must not let the drug cartels exploit the [COVID-19] pandemic to threaten American lives. In cooperation with the 22 partner nations US Southern Command will increase surveillance, disruption and seizures of drug shipments…” Trump said.

Gen. Mark Milley, Chairman of the Joint Chiefs of Staff, said there were “thousands” of sailors, Coast Guardsmen, soldiers, airmen and Marines involved.

This military deployment is meant to perform “counternarcotics operations,” but is also aimed at denying funds to Nicolas Maduro and his closest allies, who have been recently indicted in the U.S. on drug trafficking charges, said top leaders of the Trump national security team.

Last week US prosecutors indicted Venezuela’s illegitimate leader and his associates on narco-terrorism charges, and the US issued a $15 million bounty for the capture of Maduro. As Univision noted, it “also comes two days after U.S. Secretary of State Mike Pompeo offered to lift crippling sanctions against Venezuela if Maduro agreed to a power-sharing deal with opposition leader Juan Guaidó, who is recognized by almost 60 countries as the legitimate president.”

According to David Adams in Univision:

“Juan Cruz, former National Security Council senior director for the Western Hemisphere, says the deployment isn’t far off a naval blockade and sends the Maduro regime “a throat-punch message.” It’s also too expensive a move to constitute a bluff. “It is intended to firmly underscore that we ain’t kidding,” he said.”

Maduro responded by tweeting Saturday that he had “ordered the mobilisation of artillery [pieces]” in the country’s strategic areas in order to protect the security of ordinary Venezuelans, reported The Nation. This mobilization is part of Venezuela’s ongoing 2020 Bolivarian Shield military drills, which began in mid-February.

Univision notes, “the defiance from Maduro is hardly unexpected and may hide heightened fears and tensions within the regime, some say.” Univision added:

“With the military headed down there the ‘chavistas are really concerned’,” said Russell Dalen, a Venezuela analyst who owns Caracas Capital Markets. The top military and political circles around Maduro had to be thinking about their own future, he said, including recovering their frozen assets, and picking up the $15 million reward for turning Maduro in.”

Maduro’s bluster follows the huge embarrassment of a Venezuelan navy ship sinking after it tried to ram a European cruise ship off its coast. Venezuela accused the Portuguese-flagged “Resolute” of “aggression and piracy”, and possibly carrying mercenaries to attack military bases in Venezuela. The cruise ship, which has a reinforced hull for polar expeditions, suffered only minor damage.

“They are idiots. They sank their own ship,” said Dalen.

While some question whether Trump should be launching major new military operations during the Wuhan Coronavirus epidemic, it is important that the US show that the pandemic will not keep it from responding to other national security threats. We can fight COVID-19 and other enemies at the same time. Maduro take note.

What cities and states have told residents to stay home? Explore our map below to learn about the latest COVID-19 updates!

As I previously noted, withdrawing 11,000 U.S. troops from Germany is part of a broader strategy that involves deploying 5,000 of those troops forward...
Read more
Government

A staggering death toll! Coronavirus disease 2019 (COVID-19) has cost the lives of at least 154,333 Americans. We know the disease caused by this coronavirus is...
Read more

Now he needs to send a message to the The dictators we have in the House , I’ll put your ass in prison if you try to pull another cue during a National Emergency Pandemic

Excellent!! I agree with you 100%.
Let’s start with Pelosi and Schumer.

Amen ! Her and her cronies.

From your lips to God’s Ears !

Wuhan Virus Bioweapon AKA: China Virus, Coronavirus weaponized by China and their treasonous Godless demoncratic Commie party and cohorts Soros the MSM fake media, academia, Hollywood, Millennials.RINOs..to crash the greatest US economy ever! And to take down the greatest president ever, President Trump!! Keep up the great work President Trump! 2020 and beyond! From the Patriots of a Commie Demoncrat deadly virus?

I’m pretty certain, Nr, they struck the abortion assistance prior to passing the stimulus bill. The Senate saw it in there, and said, “No, Nannie!” That being said, I just don’t understand why, when Congress creates this kind of package, they aren’t required to include ONLY items and expenses dedicated solely to its purpose! She is one very demented woman, leading the efforts of the “do as I say, and not as I do” Democrats in their attempts to destroy our Constitution and America as we know. But there will be Civil War before we Patriots allow that to happen, and we have the Second Amendment on OUR side!

It’s the Democrats way of getting what they want. It’s a “bargaining tool, a Quid Pro Quo, I’ll give you this if you give me that. I do believe you are correct that the abortion assistance was taken off the table (sick bastards) but Pelosi did get her way with $25 million to go to the Kennedy Art Center in California. The ink wasn’t dried on the check when the Kennedy Art Center fur-lowed their staff and “fiddlers” musicians (harp, etc) Now, legislate has asked that the money be returned. I’m sure it will have to be ripped out of Nancy’s cold dead hand. IT HAS BEEN SPECULATED THAT NANCY OR HER DAUGHTER IS ON THE KENNEDY BOARD OF TRUSTEES!! I wouldn’t doubt it.
And, while your Googling that, Google SALT another “goodie” Nancy is trying to get thru for the rich.

I think that maybe Trump should not have signed the bill and let it be shown that Nancy was to blame.

ME
Reply to  JAMES BENTON

that sounds like a makings of a good movie

$10,000 American dollars for those who lead the American military to the hideouts and drug processing facilities.

The drug bigshots won’t be able to sleep, much less, trust anyone!! Then we can sit back as soldiers in their own drug gangs start to turn on each other.

What a great idea. Let’s do it.

Criminal prosecution for terroristic threats against USA by U.S. Democrats and Muslims !
Violations of Oath of Office !
Sedition, and TREASON !
Impeach from Senate, cut off pay, no pension; Prison 10-yrs; then, banish from USA forever!
Same for crooked Pelosi, Omar, AOC, Waters, Muslims Squad, Romney, the Clintons and the Obamas, Soros, cooked FB I, CIA, IRS, et.al.!!! Prison 10-yrs, then deport to Haiti, and banish from USA forever! IMMEDIATELY. !!!

Boy wouldn’t that be great .

I think it should be done! hope it does get done !

Better yet, after serving 10 year prison term, place them on a ship that an be remotely piloted and run them aground in North Korea. Make sure the ship is full of spy equipment too, hidden to look like its not meant to be found.

That will be the LAST time we see any of them again.

I said this a month ago stop doing business with China. I understand the dock workers in New York are refusing to unload Chinese goods. Good let it rot. I learned a long time ago{*j*} Don`t ever trust someone that smiles all the time and opologizes. I thought cloud seeding but follow Chinese goods and then the people infected.Rat bait has the same effect. We have 10 year old politicians in Washington DC saying Trump did it? They need 20 billion in tax payers money to prove it.

Lisbon was the supreme ruler of the seas, Vasco deGama was sent off to explore for Portugal and he found the route around the Horn of Africa which, then, kicked out Italy as the most powerful nation, and richest, and installed Portugal – Maduro is ignorant for not knowing that but it’s to his disadvantage since Portugal remembered and meant to win and sank Maduro along with his ship. – All those nations are supporting our President Trump, Democrats and Media’s must be so irritated that their hateful bluster against Trump is so useless and they’re showing up how Nance the Ripper Pelosi and Sabotage Schumer are so like vicious dictator Maduro.

Drug kingpin?? This Maduro sort of reminds me of Noriega from Panama….

Any aircraft. ship, boat, car, truck, van or other means of transportation should be given one chance to surrender, if they fail to do so they should be shot down, sunk, or other wise destroied. These animals do not understand anything except violance anything less is considered weakness. These drugs kill Thousands of Americans every day. During WWII submarines used to keep track of the tonage of the vessels that they sunk, ths practice should be reinstated and the crew should be given a bounty on the amount of drugs that they recover.

Maduro reminds me of CLAY JENKINS, the dictator of Dallas Texas.
Poor Clay. He so wanted to dominate the Republican governor Abbot but got shot down by his all Democrat County judgeships and Democrat mayor.
Yes, Jenkins thought he was a dictator. And he was working so hard to destroy the economy of Dallas. LOL

Wuhan Virus Bioweapon AKA: China Virus, Coronavirus weaponized by China and their treasonous Godless demoncratic Commie party and cohorts Soros the MSM fake media, academia, Hollywood, Millennials.RINOs..to crash the greatest US economy ever! And to take down the greatest president ever, President Trump!! Keep up the great work President Trump! 2020 and beyond! From the Patriots of a Commie free America!

Trump’s Most Savage Moments Through the Years