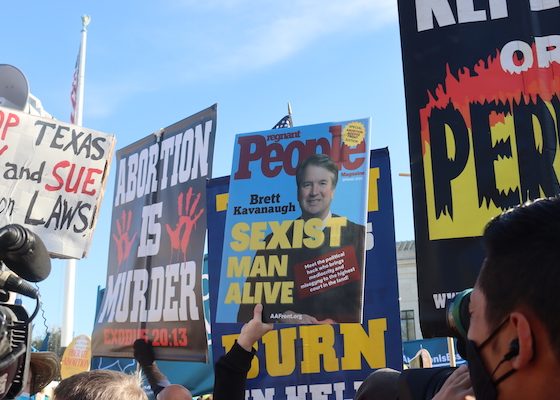 Abortions are one of the most polarizing issues in the country. Both sides of the political aisle fall one way or the other with very little give. Democrats can argue about limits on which trimester they should be allowed up until, whether it’s actually a life, can it feel pain, and other grotesque questions of that nature in an effort to rationalize murder. While Republicans, with a few exceptions, simply consider it murder, or attempt to add a very short limit of when an elective abortion be done up until.

While this is a nuanced political argument, one can’t help but notice how Democrats argue in favor of abortion – they shy away from details because they’re aware that the procedure of an abortion is something that nearly anyone can’t stand the thought of, then they attempt to bring up cases of rape, incest, or if the mothers life is at risk, which accounts of less than 1 percent of abortions. Republicans, however, are more than comfortable with bringing up the details, the hundreds of thousands of abortions that occur annually, and then raise the question of if this is moral to subject a human to.


Several vulnerable House Democrats seeking re-election are refusing to answer crucial questions on abortion, if they support gender-selective abortion, and if they support legislation that would allow the termination of a pregnancy up until the moment of birth.

“Congresswoman Slotkin supports the 50-year precedent set in Roe v. Wade, giving women the right to privacy in their own personal health decisions, including whether to end a pregnancy, up to the point of viability,” Austin Cook, a spokesperson for Slotkin, told Fox News Digital. “If a woman’s health is at risk beyond that, a woman and her doctor — not the federal government — should make the decision about whether to terminate a pregnancy.”

Mallory Carroll, vice president of communications for Susan B. Anthony Pro-Life America, expressed her thoughts on pro-abortion candidates running in this year’s midterm election in an exclusive statement to Fox News Digital: “‘Safe, legal, and rare’ went out the window long ago — now Democrats must fully back unregulated abortion on demand without limits, paid for by taxpayers. For proof of this, look no further than the very deceptively named ‘Women’s Health Protection Act.'”

The Women’s Health Protection Act is a bill that was introduced by the Democrats that support abortion “without limitation” and prevents any restrictions on “abortion after fetal viability.”

Following the Supreme Court ruling in June that overturned Roe v. Wade and declared that abortion was not a constitutional right, Democrats have spent millions in campaign ads that specifically mention abortion and are using the topic to drive their campaigns in the final stretch before November.

Democrats are dodging the questions about abortions, but will gladly fundraise on the topic of abortion. “Safe, legal, and rare” was something that won over a lot of Americans, but no one assumed it would go from “Safe, legal, and rare” to nearly 1,000,000 per year for any reason in the world. Democrats are likely aware of this, and would like to just keep people in the dark by saying things we’ve all heard before like it’s a “clump of cells”. While Democrats say things like how a preborn human is a “clump of cells”, they also strongly oppose Texas’s Heartbeat Bill, which doesn’t allow an abortion if a heartbeat is detected.

Why does this site use a moderator? my thought is, they really don’t believe in free speech.

Really, even for votes??