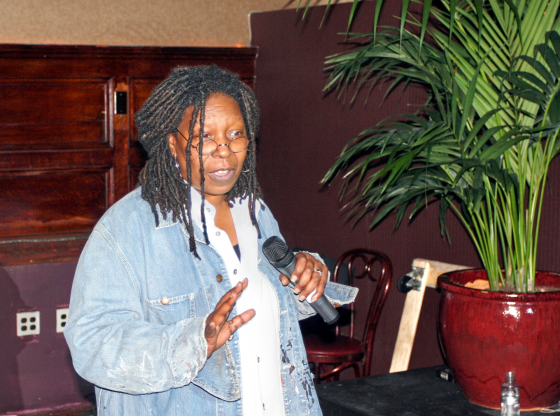 ‘View’ host Whoopi Goldberg caused a heated argument on Monday when she claimed during a filiming of ‘The View’ that the Holocaust was not actually about ‘race.’


Tensions rose on ABC’s “The View” after regular host Whoopi Goldberg claimed during Monday’s broadcast that the Holocaust was “not about race.”

Goldberg and her co-hosts — Sara Haines, Joy Behar, Sunny Hostin, and Ana Navarro — were discussing reports that a Tennessee school had pulled the graphic novel “Maus”  over concerns about language and nudity, and the conversation turned to the subject of “Maus”: the Holocaust.

Sparks fly as The View panel confronts Whoopi after she says "the Holocaust isn't about race. No. It's not about race."
"Well, the considered Jews a different race," Joy Behar says.

"But it's about white supremacy. It's about going after Jews and Gypsies," Ana Navarro adds. pic.twitter.com/GZwZSi2qXi

“If we’re going to do this, let’s be truthful about it because the Holocaust isn’t about race. No. It’s not about race,” Goldberg said.

Needless to say many weren’t happy with Goldberg’s statement, conservatives on Twitter fired back:

Whoopi Goldberg: "The Holocaust isn't about race!"
Hitler in "Mein Kampf": "Is not their very existence founded on one great lie, namely, that they are a religious community, where as in reality they are a race?"

Shame on Whoopi Goldberg, apparently she could use some education on the Holocaust.
Hitler’s entire propaganda machine spewed the message that Jews were an inferior race to Germans who were a pure “Aryan race.” And then they murdered six million Jews based on this belief. https://t.co/U3U5nGTRPP

If the Holocaust wasn't about race…what was it about?!

It's time for Whoopi to retire.

More proof-if any more proof is needed that is-that liberals are completely and totally insane.

Another LIBERAL IDIOT proving themselves to have WORTHLESS FECAL MATTER overflowing their otherwise empty skulls.