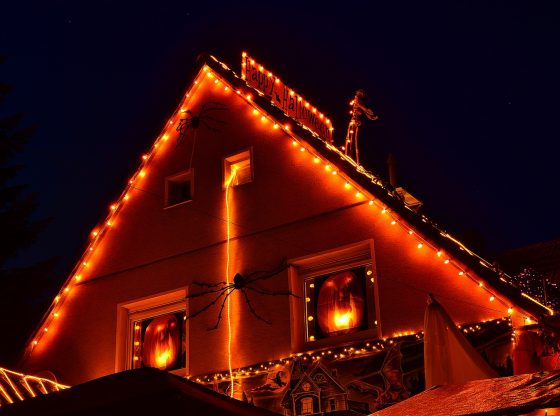 By Dirk Vorderstraße - Flickr: Halloween-Haus Hamm, CC BY 2.0, https://commons.wikimedia.org/w/index.php?curid=31650958
| Dan Backer | Politics | 4
Advertisement
HELP This Conservative Star DESTROY Maxine Waters! [ACT NOW]
COVID-19 may not be in the rearview yet, but Halloween 2021 is right around the corner. Not only that, but America’s spookiest holiday will be the most expensive in U.S. history.
This year, Americans will spend more than $10 billion on Halloween costumes, decorations, and candy—up from $8 billion last year. The average trick-or-treater will dish out over $100 on the festivities, despite the spookiness of the Biden economy and sky-high inflation. By the time 2021 is in the books, Americans will have spent more than $1 trillion on a wide range of holiday goodies. That’s right: $1 trillion, with 12 zeroes.
Yet, if Democrats are to be believed, there’s nothing spookier than political spending. “Campaign finance reform” is a top priority, you see! Our campaign finance system is “brazenly corrupt,” don’t you get it? On the eve of any and every election, Americans are subjected to a steady stream of fear-mongering, as if political spending is Chucky, Michael Myers, and the Boogeyman put together.
Newsflash: It isn’t. In truth, political spending represents a drop in the vast ocean that is American consumerism writ large, paling in comparison to the wild world of racy Halloween costumes and Christmas ornaments. This election cycle, even the wildest expectations for the upcoming TV, radio, and digital advertising spend still fall below $8 billion—less than the 2020 election cycle and significantly less than Halloween 2021. The much-publicized Virginia governor’s race, for example, ranges in the tens of millions alone—minuscule compared to America’s holiday splurge, even in a COVID-19 economy. (Billions of political dollars are also double-counted, tallied once when a PAC receives the money and again when contributed to a campaign.)
Don’t believe the hoopla about the “broken” campaign finance system. Political spending may be a hot-button issue, but not for good reason. The Left is simply obsessed with outrage politics, making the case that Americans engaging in the U.S. political system—built on free speech and free association since its inception—is somehow a problem.
The solution to our “broken” campaign finance system, if there is one, isn’t less political spending; it’s more. Free speech is a good thing. Free association is a good thing. The free exchange of ideas needs to be expanded, not shrunk, in order for American democracy to survive and thrive.
Anti-speech liberals don’t oppose “money in politics”; they oppose the “wrong” kind of money—yours, not theirs. Democrats like President Biden hope to control the flow of information, deciding unilaterally what may be in-bounds or out-of-bounds. They are desperate to determine what we can and cannot be exposed to in public—what’s “good” for us—with the federal government serving as the ultimate decision-maker.
Yet that power is not theirs to consolidate. Democrats do not have power over the First Amendment, no matter how desperately they seek it.
Why can Twix spend millions of dollars on Halloween advertising, but Americans can’t spend money to support a local candidate or join together in opposing an idea? Why can Halloween Kills promote another sequel to the masses, but Americans can’t participate in democracy? No public official has the right to control that participation—not now, not ever.
There is no harm in political spending, just like there is no harm in yet another Halloween trailer. In the end, Americans have the right to decide whom they support or oppose. We have the power to tune in or tune out of whichever messages are put in front of us. Don’t kill the messenger—leave that to Michael Myers.
Whether we’re being sold candy or candidates, the messengers and their messages are an integral part of American life. The free flow of information is the American way of life. There is no solution when a problem doesn’t exist.
Dan Backer is a veteran campaign counsel, having served more than 100 candidates and PACs, including two of the largest pro-Trump super PACs. He is a member of Chalmers & Adams LLC, a political law and litigation firm.
Advertisement
HELP This Conservative Star DESTROY Maxine Waters! [ACT NOW]

Dan Backer is a veteran campaign counsel, having served more than 100 candidates and PACs, including two of the largest pro-Trump super PACs. He is a member of Chalmers & Adams LLC, a political law and litigation firm.

Biden Claims Pope Francis Gave Him His Blessing to Keep Receiving Communion
REPORT: 34% of White Student Lied About Their Race to Improve Admissions Chances at Colleges

Personally I think the campaign finance laws are part of the problem. You have foreign money coming in, being laundered under PACs and other organizations. You have people influencing elections that aren’t theirs. Here is my solution (and it wouldn’t be spending more money):
1) You can only donate if you are an American citizen and registered voter.
2) You can only donate in elections you can actually legally vote in.
3) There would be a cap on the amount you can donate to each campaign.
4) Only VOTERS can donate, NO PACs, NO businesses, NO unions, etc. The PEOPLE are the ones who vote and only the people should be spending money to assist in elections.

This would equal the playing field as big donors would no longer have a huge financial influence in elections. Business, unions, and PACs would also be silenced – after all, their members already can donate as individuals, but couldn’t collect donations (anonymous donations) from others.

I agree with free speech, but this speech should come from voters with equal opportunity for all people!

Some voters can donate more than some voters. Think differently maybe a cap on how much a candidate can receive from voters based on the number of voters that are eligible to vote for the candidate. All voters donating is painting with a very wide brush.
matybe it should be zero donations and just vote for a candidate that has the best interest of the candidates that hold his or her voters best interest and after they’ve served retire and let another person take their place Term Limits.