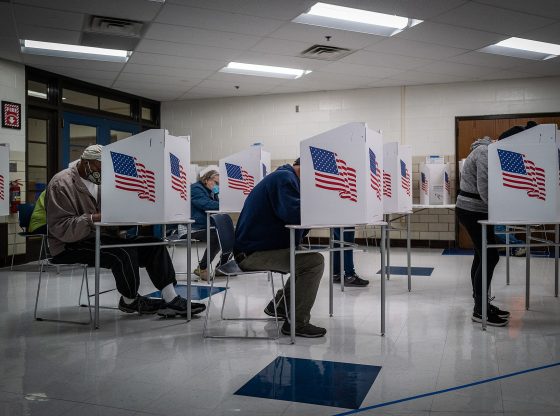 A Democrat in Connecticut is now facing multiple charges of voter fraud after allegedly being caught using the identities of individuals living in his own apartment building in an attempt to help his own candidacy for city council.


A Connecticut Democrat has been charged with multiple counts of voter fraud after allegedly stealing the identities of numerous tenants in his building to boost his run for city council.

Bridgeport city councilman Michael DeFilippo was charged with one count of conspiracy against rights, four counts of identity theft, and 11 counts of fraudulent registration for a scheme that helped him win his spot on the city council.

“The right to vote and have one’s vote counted in a fair and impartial election is the foundation of our democracy,” acting U.S. attorney Leonard C. Boyle said in a statement. “This defendant violated that right to help himself win election to the Bridgeport City Council, including by stealing ballots and forging signatures.”

The indictment comes as lawmakers engage in political battles over election reform nationwide. Democrats have attacked concerns over voter fraud as conspiratorial and denounce efforts aimed at increasing election integrity as racist forms of voter suppression. The Biden administration has filed a lawsuit to prevent Georgia from enacting an anti-voter fraud bill in the wake of the 2020 election, while Texas state lawmakers fled to Washington, D.C., in an effort to block ballot-integrity measures.

The case highlights the need for stricter voting laws across all 50 states in order to head off the threat of continued Democrat abuse of the system.

You are insulting Gods creation. Human beings come in different shapes, sizes, colour and creed but we are all Gods children. using race as a weapon is a weakness used by people with zero common sense or integrity Rather tackle behaviour. As my Head master Dad always taught us, critise behaviour not character. Especially with children, dont say you are stupid, rather say, what you did was stupid. Lets move on past petty party politics which seeks to divide, as united we stand strong in Gods 10 Commandments Amen

will
Reply to  phyllis elliott

I do think that this has devided the races in America more than in the past. What we need is to spead more Love instead of hate. Jesus is the perfect example. <}}}><

Zues Papadopoulos
Reply to  will

Spread the love. Seriously, Will? I do believe that ship has sailed. Time for tar, feathers and rails.

big problem with that is that MOST do NOT know what a rail is and a hint: it has nothing to do with trains at all…. that and there aren’t feather pillows any more that I know of…. but it is a good idea just the same My suggestion would be a Rope and a stout Live-Oak

Not all the Rats are white!!! There’s also black, mexican and middle eastern nationalities in Congress pushing their Fear crap on the American people. It’s time to remove all these Liberal Socialist Marxist Communist people from ever holding any kind of public office anywhere!

he will be our next president if the dems have thier way, why because he is a true and tried cheater, corrupt individual, Yes meeys the dems standards to a tee

Well, he will get his just rewards in prison hopefully. Shame on him for cheating. They need to go to the top and get them too.

Time to make an example of someone who wishes to hold a political position. We have enough political dishonesty in the W.D.C. Swamp –we do not need to have it in Council jobs. Maximum penalty for each illegal vote he cast.

His first mistake is he didn’t form a pac of idiots to do his handy work for him. Zuckerbum did exactly that, and he’s still walking around free after pulling off tampering an election with 400 million…

What you see or read or hear about him is either Body doubles, clones or CGI Zuckerberg was taken care of long ago thank God. He was a Rothchild and the Fakebook was started by CIA. Like Bill Gates who cheated in school, was expelled and cheated with Microsoft, Zuckerberg also cheated his 2 friends out of Fakebook. Godless souls with no conscience

He’s a democrat so of corse nothing will happen!!

Don’t they realize that it’s unconstitutional to indict a Socialist Democrat? Aren’t there some Republicans they can prosecute or at least persecute? Equal justice under the law means today that all Democrats are conclusively innocent while all Republicans are guilty until proven innocent and then punished anyway.

Look at Eric Salwell who is being used by a Chinese spy to make some corrupt money. Where are the investigating committees to
check all the corruption, Hunter Biden who is
in cahoots with China and selling us out,
another traitor, Adam Shitt who said that
there was plenty of evidence that Trump
colluded with Russia? None of the 18 lawyers
found any evidence of wrongdoing but there
was not 1 republican lawyer to stand behind
Trump. They are not fair at all, they’re the
evil ones. This has been proven many times
over.

Kate, you forgot to add the Chinese agent, who was Feinstein’s chauffer – FOR 20 YEARS ! ! ! ! Where the hell was the vetting for him and the removal of her. A lot more serious evidence against her and Swallowell, than there ever was against Trump. Talk about double standards.