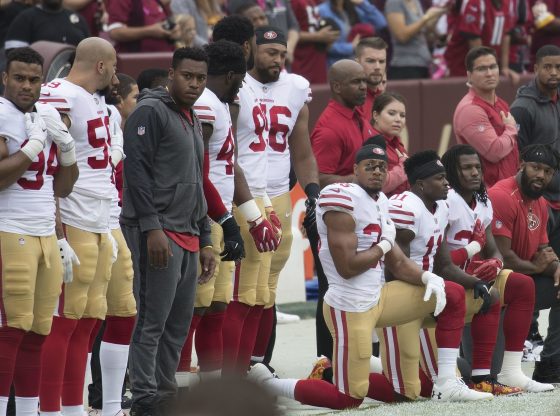 According to a shocking new report the so-called ‘Black National Anthem’ will now be played at all future NFL games during the traditional pre-game ceremony beginning on September 9th of this year.

The NFL also plans to make “Lift Every Voice and Sing” — often referred to as the Black national anthem — a prominent part of all big-league events, said sources. They will likely highlight victims of racial injustice with a “Say Their Stories” project, as well.

In today’s hyper-partisan media environment, most fans experience football through the prism of television. This year’s renewed social-justice messaging efforts will be visible to the 200 million-plus TV viewers who watch game telecasts each season.

In 2020, the league suffered its first regular-season TV audience downturn in three years. Schedule irregularities and postponements due to COVID-19 were a likely factor, though some propose that social justice messaging impacts viewership as well.

…
While the NFL declined to comment, sources said this year’s social justice initiative could be as big, if not bigger, than last season’s in terms of spend, resources, and overall commitment.

If the NFL thinks playing into radical politics is a good way to boost viewership (which is already down significantly) it may be in for a very rude awakening this fall.

What about the Asian National Anthem, or the Native American National Anthem? Looks like the NFL isn’t taking into account the feelings of these people groups. What bigoted racists they are in the NFL! (All Sarcasm of course). What a joke!

They should have gotten David Allen Coe to write the lyrics.

How about fairs in the woods with dancing freaks?

There’s only one National Anthem! If you don’t like it leave!

I don’t veiw your comment as a joke but truth and then fl is racist and bigots. I stopped watching any games when that kneeling started and truely I now question why I ever watched those idiots. They aren a bunch of big babies who are playing a kids game. Many oif not most are criminals and always have been. I don’t view any of them as humans cause they never grew up. wprtjless wastes of breath and the organization, nil, is nothing but a joke run by total idiots and I hope to see them all woith out thier cushie jobs… love to watch them fail when they actually have to work for a living, yes all of them

Who said the nfl is our favorite pasttime? For several years it hasn’t been. They also took down nba, mlb, nascar and the ever unpopular women’s soccer.

Will not be supporting the NFL (national football losers). Go woke go broke!!!

The past 2 yrs at least have been real bad for them. This yr I see it as probably their last yr. As more Americans have opened their eyes even more with this
Baffoon in the admin.
God Bless America and All Americans!!!!

Guess they did not understand the message we’ve been sending them. Apparently, they “Woke” up stupid.

As long as they can get advertisers to pay the price for commercials during the games the league will survive.

Yes…but who would pay for advertising if no one sees it?