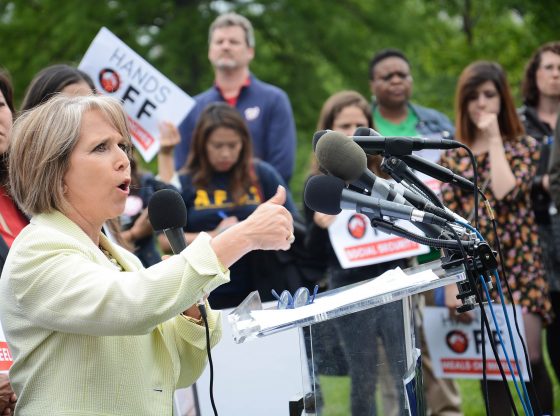 Democrat New Mexico Gov. Michelle Lujan Grisham, who paid a former campaign staffer James Hallinan over $62,500 after she allegedly grabbed his crotch at a campaign event in 2018, has now placed blame on the pandemic for her decision to settle.


“I was focused on the pandemic, and I’ll stand by that decision [to settle] every minute of every day,” she told reporters in her first in-person comments about the settlement. She also denied there had been any additional settlements or nondisclosure agreements.

Payments to Hallinan’s attorney were made in five monthly installments to a law firm representing him.

When asked if Hallinan’s claims had ever been independently investigated, Grisham said she had “not seen anywhere in the country where there’s an independent investigation over an employment claim.”

State campaign finance regulators say that the settlement payments from a political campaign account are permissible because they involve an employment dispute related to Hallinan’s time with the governor’s election campaign.

Grisham is a former member of the U.S. House of Representatives from New Mexico’s First District and was elected as governor in 2018.

Lujan Grisham announced her reelection bid last week where protesters held signs and drowned out her speech. In frustration, she branded the rowdy crowd of protesters “QAnon lizard people.”

The Democrats defend their allies in China, who they assist in developing biological weapons for entertainment purposes?
Imagine when China has a more deadly COVID version, gives their new vaccine to the elites in China, and then starts a nuclear war over Taiwan, hoping the virus will kill off the survivors around the world, leaving the murderers of Tiananmen Square the rulers of this world.
From a moral perspective, a nuclear strike to erase Wuhan’s bioweapons labs and to show the Chinese government that we will kill them, when they kill us, would be a blessed event, like the death of Goliath. May God bring fire onto the murderers of Tiananmen Square. These Chinese people are our brothers, just as were the people oppressed by Hitler.

If NM Democrats can elect scum like Grisham, maybe they should all move to Mexico or some other country without honest standards.