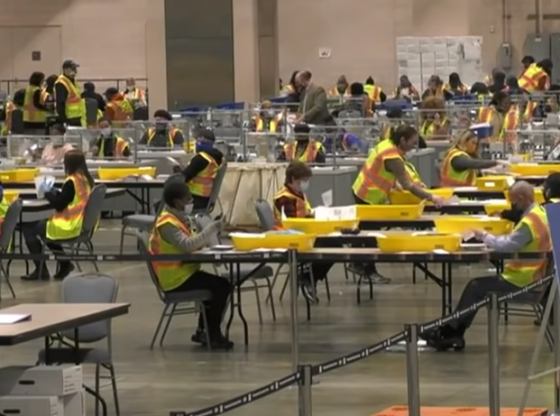 “There was an issue where we noticed there were more people on the absentee ballot filed for voting in person in Fayette County than was in the actual reporting,” Georgia election official Gabriel Sterling said, according to Fox 5 Atlanta. “It was discovered today for certain. Because of the audit, we found this.”

Sterling said the problem was the result of several individuals not following the proper procedures.

An additional 284 ballots were found in Walton County. The local Board of Elections chair, Lori Wood, told the Walton Tribune the problem was due to votes being previously uploaded from only one of the two ballot scanners in a precinct.

READ NEXT: A Closer Look at the Trump Team’s Legal Challenges >>

There needs to be real and serious punishment for the crimes these democrats have committed against the American citizens and the constitution of the United States!

The DemocRats are now the Communist Party in America!! Become a Counterrevolutionary – Stand-up for the United States of America!!! STOP THE ONE-WORLD GOVERNMENT “RESET”!!!!!

The demonRat party should be barred from any election procedures for ever.

Not only will they not be punished they will actually be rewarded. Know this, their reward will be short and bring them misery for a long time to come. If you are a Christian claim the scripture John 14:1. “Let not your heart be troubled; you believe in God, believe also in Me. If you have put your faith in Jesus Christ he will protect you. If not I implore you to accept Him as your personal savior today.

the traveller
Reply to  Jim Pierce

I quit worrying about the election, and just handed it over to the LORD. Hook, line, and sinker. Give it to the Lord people. HE is still in control.

Seastar
Reply to  the traveller

The death penalty is too good for them. That would be letting them off too easily. I say they should get life without parole in solitary confinement. That way, all they’ll have to occupy their minds is to dwell on their sins.

I have been convinced from the beginning the election is fixed, in this day and age not hard to do, big money killing this country, it will not change because our reps are pussies

I believe this election is rigged to many last minute changes..we need more voting places, voter ID and vote in person….this country is loosing its moral fiber.

Agreed. I think every church hall should be used &the boundary should be set for those who are within walking district of all. It does not mean you have to attend or belong to that church . But live in the boundaries Show your ID & two utilities bills for that resident that you live in