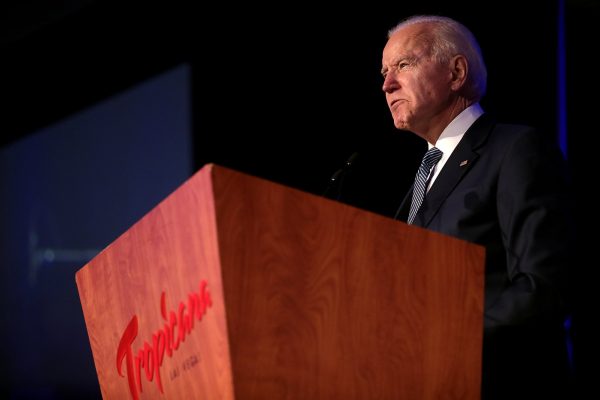 A rule of politics is you never compare your opponent to the Nazis because it makes you look even crazier.

But that doesn’t seem to matter to an unstable and unpredictable Joe Biden.


Biden compared President Donald Trump to infamous Nazi propagandist Joseph Goebbels and Cuban dictator Fidel Castro in an interview that left many wondering if his own mind had been blitzkrieged.

“I think people see very clearly the difference between me and Donald Trump,” Biden said. “Trump is clearing protests in front of the White House that are peaceful, you know, with the military. This guy is more Castro than Churchill.”

Trump did not use the military to clear protesters from Lafayette Park near the White House.

The Republican Jewish Coalition called Biden’s bizarre claim “egregious” and asked him to apologize for it.

“Rather than launching preposterous accusations against the president, Joe Biden and his team should answer for inviting notorious anti-Semites Tamika Mallory and Linda Sarsour to speak at the Democrat National Convention,” said Trump campaign spokesman Ken Farnaso. “Biden is desperately trying to distract Americans from his disastrous record and socialist policies.

Sarsour, a liberal activist of Palestinian descent with a history of violent and anti-Israel comments, has appeared at numerous Biden events.

Mallory, who called Kentucky’s black Republican attorney general a “sell-out Negro,” accused the Anti-Defamation League, a Jewish civil rights group, of plotting against blacks.  Mallory even organized a boycott of Starbucks after the coffee chain included the ADL among the groups that would train employees on civil rights.

Both Sarsour and Mallory continue to campaign with Biden.

READ NEXT: He Survived Nazi Concentration Camps. The Media Should Hear His Message About Our Detention Centers. >>

Biden’s rant is not only bizarre, it is absurd.

That would be the peaceful protest that set fire to a church building? Just asking….

Like he said, “tell people a lie often enough and they will begin to believe it”. Kinda paraphrased. The dems are doing exactly that.