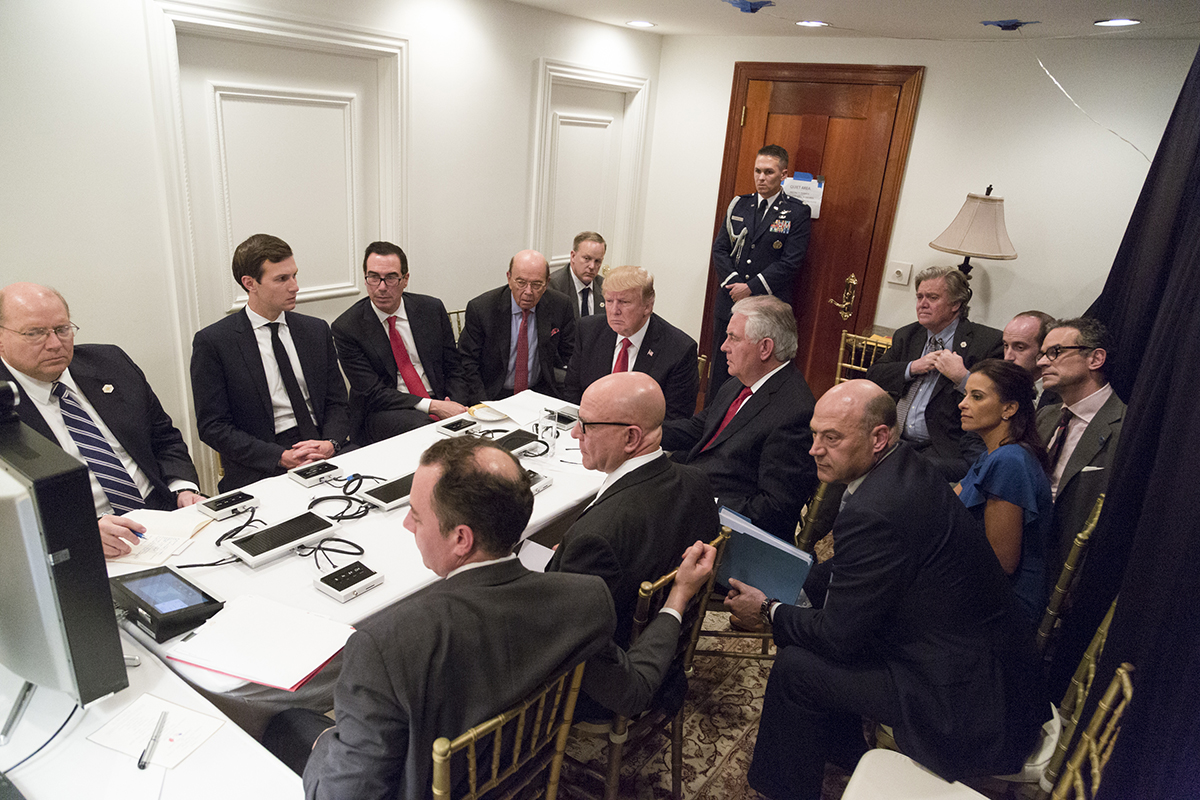 The vice president of an anti-Trump think tank called for former Trump administration official Michael Anton to be executed for his pro-Trump political views.

Nils Gilman tweeted on Monday that Anton deserved to share the same fate as Robert Brasillach who was executed in the 1940s for his role in assisting the regime of Adolf Hitler. Gilman decided to compare Anton to Brasillach and demand he too be executed due to the publication of his new book “The Stakes: American at the Point of No Return” which makes an intellectual case for reelecting President Trump and for his insistence that anti-Trump forces were attempting to stage a coup against him:

Michael Anton is the Robert Brasillach of our times and deserves the same fate https://t.co/eJNOF49qTa

Prominent conservatives were quick to decry Gilman’s despicable death threat, for which he is yet to face serious consequences for:

You can take your conspiracy theories and ram them right up your caboose. Copy?
Now that I know you’re terrified of the attention we brought to your coup I’ll be sure to triple down on my efforts to expose your destruction agenda.

“It’s absurd to suggest anything like a coup. Also people I disagree with should be executed.”

I know @jack & @Twitter don’t care when people they disagree w/politically are threatened, but here’s a pleasant Berkeley PhD/@berggrueninst thinktank VP declaring that my friend & colleague Michael Anton deserves to be *executed*. Lib Privilege. Rest of us wld be fired & banned. https://t.co/h0onUUZOJg

How many privileged elites now spew hate-filled and increasingly violent rhetoric with impunity, even as their soldiers in the streets increasingly get violent and threatening for real, while the rest of us get banned for saying things like "men can't be women"?

If you can't do anything about language like this, @jack and @berggrueninst, which is justifying the execution by firing squad of those who disagree with you, then we have to assume you support it. And that's sick and evil.

With Antifa and Black Lives Matter terrorizing everyday Americans in the streets and prominent liberals now publicly making death threats against former Trump administration officials how long will it be before conservatives will be forced to take the defense of the lives and property into their own hands?

That whole damn bunch needs to be put in front of a firing squad. Where’s the secret service at on this? Such hateful conniving BS.

Linda: True indeed…Amazing how juvenile these leftists are….completely irrational and I would bet they are the result of heavy drug use in their youth (if not even still). Years ago I said this would be the result… addled brains due to drugs…I can say this as I have never in my entire life even smoked a single cigarette. Never ever taken any illegal drugs. I KNEW THIS DAY WOULD COME! MANDATORY RANDOM DRUG TESTING FOR ALL POLITICIANS….and immediate expulsion if they fail…..then we shall have to deal with bribery of those administering the tests won’t we? The saga never ends.

Just when you thought you’ve seen grown men do some really asinine things, you discover this group and hear their Nazi rhetoric. This kind of thing is like a little group of Hollywood freaks would make into a movie like the ones liberals hunting and killing Conservatives. This group of idiots are exactly what the left has imposed on our country. Just kill or destroy anything that doesn’t fit their narrative. Hmmm…I’ve read about this in history somewhere. Oh ya, it was Stalin, Hitler, Mao, and Castro.

this group needs to be placed in prison confinement

It is not enough. Deport them or life sentence without parole