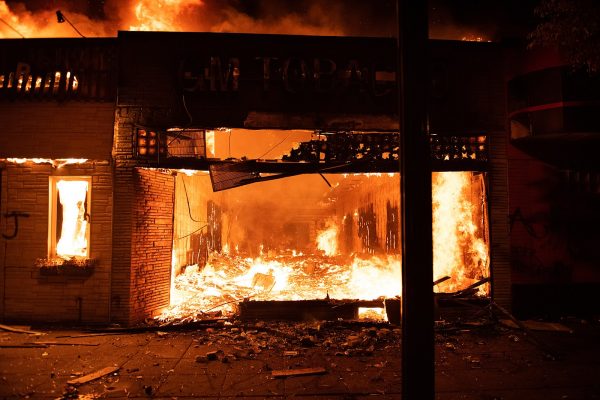 Local business owners in Kenosha, Wisconsin are struggling to come to terms with the violence and destruction laying waste to their livelihoods.


Rioters proclaiming themselves victims are seen leaving the man bloodied and broken afterward. The footage is disturbing and further counters the narrative promoted by the liberal media in the wake of numerous fiery clashes.

Rioters nearby turned their attention to another car dealership, after causing millions in property damage the night before. Armed citizens donning tactical gear and carrying firearms dissuaded them.

‘We’re trying to stop them from hurting their own community’: Armed citizens protect businesses during Kenosha riots — https://t.co/xN9MNo2gLw — with shout out to @Julio_Rosas11 and @DailyCaller for being on the scene. Report for @dcexaminer

However, others were not so lucky.

The owners of Car Source in Kenosha told local affiliate FOX 6 Milwaukee the business suffered $500,000 in property damage plus between $900,000 and $1 million in inventory damage during the first night of civil unrest following the police shooting of Jacob Blake, a 29-year-old Black man.

More than 50 cars were reported to have been damaged in the early Monday morning blaze, according to the outlet.

Prior to the destruction, Car Source — which had a sign that read “Black Lives Matter” hanging at the dealership — had more than 140 vehicles available for sale, according to its website.

The owner of Dale’s Jewelry, who was unidentified in the clip, said “That is not protesting … All this is doing is bringing us to the brink of a Civil War.” What do you think? As always, share your thoughts with us in the comments below!

Some how these protesters seem to seek out and find people and business that have nothing to do with what they are protesting and then they hurt them! They are only trading HATE for HATE!

If the protest was peaceful, Why do they hurt People? If the Protest is Peaceful,Why do they burn down Businesses? Time to Fight back Peacefully— Take them Out.

your absolutely right. A well trained vigilante group will take out a half dozen BLM scum and you will see it all stop because they are cowards and cowards can’t fight

Yes, the only way a total COWARD will fight is if he has a whole crowd behind him. One on one and he gets hurt every time. If he has you out numbered 15 to 1, then they are SO BRAVE.

15 to 1 and he’s an old man! They wouldn’t fight one on one or even three on one. These “peaceful protestors” are waking a sleeping giant. They’re going to hurt the wrong person then they’re going to unleash a fury they’re too stupid to believe exists.

They can only run in and hit someone in the back and run! Plus they work in packs, cowards!

This was ……….NOT a 1stA protest.
THIS …IS DOMESTIC TERRORISM

We are armed and ready where I live.
Protest ? yes, Loot and destroy ? You won’t make it home if I see you.

Where I live too! The first rock will be answered with gunfire.