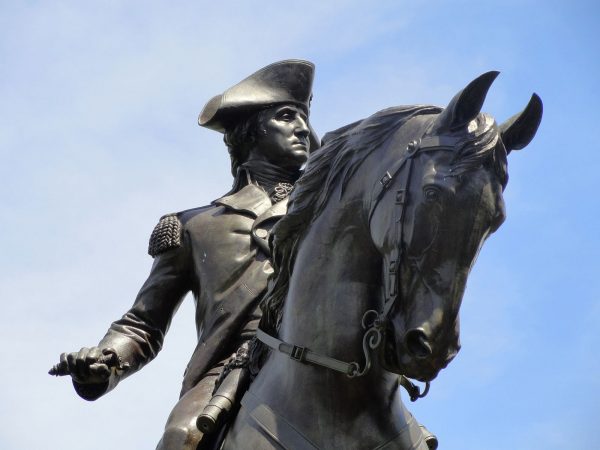 Rioters in Oregon’s largest city burned an American flag draped over a statue of George Washington — before destroying it.

The nearly 100-year-old statue of George Washington in NE Portland has been pulled down. There are no police in the area. #antifa #BlackLivesMatter pic.twitter.com/qdiY1Y0Zo8

A news crew from the outlet “found the statue face down and covered in graffiti.” Shortly after it was toppled, Portland police arrived on the scene, KOIN reports.

Journalist Andy Ngo tweeted out videos of the destruction of property, writing: “Antifa rioters on Sandy Blvd. in Portland draped a US flag over a George Washington statue [and] set it on fire. They then toppled the statue. ‘Genocidal colonist’ [and] ‘f— cops’ are sprayed on monument. Rioters have began to build another autonomous zone nearby.”

Ngo later added a video showing the aftermath and the destruction by the leftist protesters.

Portland wakes up to see what antifa did overnight. A century old statue of George Washington was toppled & set on fire with an American flag. “White fragility,” “Damn white men” & other messages are written on the moment. On the ground nearby: “Defund white men.” pic.twitter.com/zjrsZHJC9o

Last week, rioters destroyed a statue of Christopher Columbus donated by Italian immigrants to the city of Minneapolis. In London, anarchists vandalized statues of Abraham Lincoln and Winston Churchill.

READ NEXT: Liberal City Is Experimenting With Socialism, and It Is Failing Miserably >>

My last month’s online job to earn extra dollars every month just by doing work for maximum 2 to 3 hrs a day. I have joined this job about 3 months ago and  in my first month i have made $12k+ easily without any special online experience. Everybody on this earth can get this job today and start making cash online by just follow details on this website………
HERE══════►►►RichFly2

Please keep your lies off these sites.

HERE’S A GOOD QUESTION …”I just watched the Democratic leaders of Congress kneel in the halls of Congress for about 9 minutes, for the death of a black man named George Floyd.

I NEVER SAW THEM KNEEL FOR THE SOLDIERS THAT HILLARY AND OBAMA LEFT TO DIE IN Benghazi!!

I have never seen them kneel for the thousands of (black and white) babies aborted EVERY DAY.

I have not seen them kneel for the thousands of elderly people that died in nursing homes due to the Corona Virus.

I have to ask: WHY are Democrats putting the life of George Floyd as more valuable than the lives of everyone else?

In fact, Democrats have put so much value on the life of George Floyd, they have allowed rioting, looting, arson, murder and mayhem in communities Nationwide…

ASK YOURSELF – WHY NOW?”

Great question, with fantastic points. The answer to the question is so painfully obvious it’s laughable. The demoncraps are doing such a pisspoor job of DOING THEIR JOB over the last almost 4 yrs, and have to deter attention away from this very disgusting fact, that theycan only degrade Trump every time they open their lying mouths. Plus they have absolutely NO political platform to run their joke of a candidate on, so they turn to trying to demonize everything Trump does. November is going to be such a great time for this country, when the Republicans take the House, Senate, and the oval office
Then this country will see an even more fantAANastic growth than it saw in the first three years of President Trumps first term, while demoncraps did everything they could to stop.

I am making a good salary online from home.I’ve made 97,999 dollar.s so for last 5 months working online and I’m a full time student. I’m using an online business opportunity I’m just so happy that I found out about it…………………Read More

If the cops opened up and killed all of these leftist assholes I would cheer.