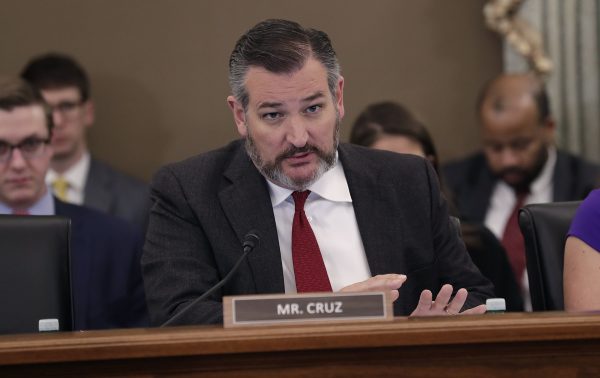 Committee Chairman Sen. Ted Cruz asks questions of U.S. Customs and Border Protection Executive Assistant Commissioner for Operations Support William Ferrara during testimony in a hearing before the Senate Committee on Commerce, Science and Space, Subcommittee on Aviation and Space, to discuss the role of the the air transportation industry in mitigating the spread of the novel coronavirus disease 2019 (COVID-19) in Washington, D.C., March 4, 2020. CBP Photo by Glenn Fawcett
| Jake Walker | Politics | 3

Republican Senator Ted Cruz had some harsh words for Democrat Governor Andrew Cuomo after the latter attacked Senate Majority Leader Mitch McConnell for questioning the need for the federal government to bail out blue states.

For days now Gov. Andrew Cuomo has been harping on glib comments Senate Majority Leader Mitch McConnell made when he rejected the idea that the federal government needs to send more financial aid to state and local governments during the coronavirus outbreak. He referred to the notion as a “blue state bailout,” suggesting that it was largely Democratic-run states that were seeking help. The Senate leader added that if states needed money that badly, perhaps they should file for bankruptcy. Cuomo called McConnell’s language “ugly” and he declared his bankruptcy idea “one of the really dumb ideas of all time.” He then “dared” the senator to pass a bill that would make it lawful for states to declare bankruptcy…

Sen. Ted Cruz (R-TX) has been listening to Gov. Cuomo’s repetitive rant and told CNBC why he believes the governor is not entitled to more federal assistance.

Congress, he noted, has already authorized $3 trillion in the past few months for coronavirus relief, hundreds of billions of which was sent to state and local governments. Now that the Senate is back in session, he’s noticed that a top priority of Democrats is to send another trillion to the state and local levels. Cruz shared his concerns about that priority on CNBC this week.

“A number of states have been highly irresponsible and have not lived within their means,” the senator explained. “And have dug insupportable pension holes that preexisted this crisis.”

As a result of the #CoronavirusPandemic, our country has experienced unprecedented economic devastation. But that is not a reason for states like Texas to bailout states that have been fiscally irresponsible since long before this crisis hit. pic.twitter.com/egc5SEcrFu

It seems unlikely that shoveling even more money into the bottomless pit of states with Democratic governors will be any kind of real solution to the economic problems caused by the Coronavirus lockdown.

I just moved from Illinois over the tax rd , and liberal agendas. More are leaving daily , see on Facebook group “Escaping Illinois” .

Sad news is, there are so many liberals running away from their failed policies, but bringing them with them to wherever they move…We can’t keep running and moving..
Cali has taken over Colorado..trying to make it into Cali the sequel…

YEAH CRUZ!!!
I am SO tired of paying for SO MANY other states and people that have been WILLFULLY financially irresponsible and then asking US to pay for THEM and THEIR financial irresponsibility!
We have families to keep housed, warm and food on OUR table!
LEARN TO LIVE WITHIN YOUR MEANS AND STOP ASKING MIDDLE CLASS< HARD WORKING AMERICANS TO SUPPORT YOUR STUPID FAILED POLICIES!

(is it obvious I am DONE bailing out everyone esle while I struggle to make ends meet?)