US Vital Interests Dictate an End to This War 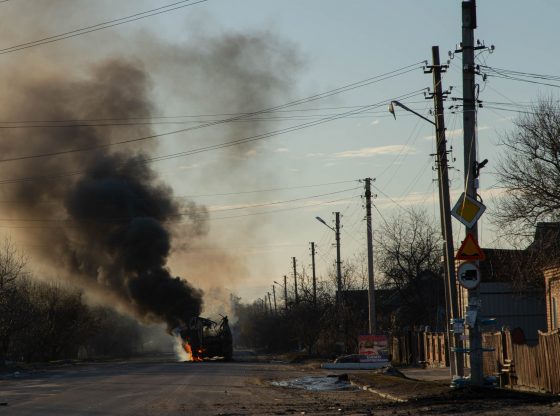 Speaking to Congress, Ukrainian President Volodymyr Zelenskyy asked for many things from the United States.

He wants us to establish a no-fly zone over Ukraine. He wants the Soviet-era MiGs that NATO allies (from their Warsaw Pact days) have in their arsenals. He wants Russian-made S-300 antiaircraft systems in NATO inventories transferred to Kyiv.

He wants the U.S. to sanction every Russian official who does not repudiate this war on Ukraine. He wants all U.S. companies to pull out of Russia. He wants all Russian-made goods kept out of U.S. markets.

In short, Zelenskyy wants the U.S. as a full-fledged ally in Ukraine’s war against the Russian invaders.

But while America also seeks a defeat for Russia’s aggression, President Joe Biden has a higher imperative: to avoid a war between the United States and the world’s other nuclear superpower, Vladimir Putin’s Russia.

And when the issue arose as to whether he, as president and commander in chief, would transfer MiG-29s to Ukrainians fighting Russians for their independence and freedom, Biden said no.

“The idea that we’re going to send in offensive equipment and have planes and tanks and trains going in with American pilots and American crews — just understand, don’t kid yourself, no matter what y’all say, that’s called World War III,” Biden told House Democrats in Philadelphia.

Biden was saying that, no matter how noble the cause or how just the war Ukrainians are fighting, his first duty is to America. And as president of the United States, he will put U.S. national interests first and not risk a war with the largest nuclear power on earth.

If our “enormous capacity” and “very competent people … were unleashed,” said Gingrich, “we would…end up defeating Putin, and he would end up being ousted from power by his own government. But instead, we are intimidated by him. We allow him to get away with war crimes.”

In this Ukraine war, Gingrich is the interventionist, and Biden is putting his own country, America, first. On this one, put me down with Joe.

A no-fly zone “means flying AWACS (Airborne Warning and Control Systems) 24 hours a day. That means the willingness to shoot down and engage Russian airplanes in the sky. That means, frankly, you can’t put those planes up there unless they’re willing to knock out the anti-aircraft systems that the Russians have deployed, and not just in Ukraine, but in Russia and also in Belarus.

“So basically a no-fly zone … means World War III. It means starting World War III. It’s not some rule you pass that everybody has to oblige by. It’s the willingness to shoot down the aircrafts of the Russian Federation, which is basically the beginning of World War III.”
While the threat to the independence and territorial integrity of Ukraine may be an existential one for that nation, it is no such peril to our nation.

Indeed, if one were to enumerate the greatest threats to the republic to which all of us pledge allegiance, the outcome of that war halfway around the world would not make the list.

The annual invasion of our country from across the southern border by millions of illegal aliens. The depreciation of the dollar through inflation, which is destroying the value of the earnings and savings of the American people.

The 100,000 Americans dying yearly from fentanyl and drug overdoses. The 1,500 daily deaths from COVID-19. The thousands of Americans shot, stabbed and beaten to death on the streets of once-great American cities every year.

During the Cold War between the Soviet Empire and the West, the great achievement of presidents from Harry Truman to George H.W. Bush was that they avoided the kind of war that consumed millions of lives of Western peoples from 1914 to 1918 and 1939 to 1945.
Consider what became of those nations and empires that entered the 20th century as great or aspiring great powers.

The Hapsburg, Hohenzollern, Romanov and Ottoman empires fell in World War I. The British and French empires did not long survive their “victory” in the Second World War that they declared on Sept. 3, 1939. The Soviet Union was bankrupted and broken by the cost of waging a four-decades-long Cold War.

Wars finished all the great powers of the 20th century, save the USA.

America’s desire today may be to inflict a defeat on Putin’s Russia.

Patrick J. Buchanan is the author of “Nixon’s White House Wars: The Battles That Made and Broke a President and Divided America Forever.” To find out more about Patrick Buchanan and read features by other Creators writers and cartoonists, visit the Creators website at www.creators.com.
COPYRIGHT 2022 CREATORS.COM

I think NATO should give him all the russian equipment they have.

LISTEN UP…The US GOVT Can Send an ABOMB to RUSSIA just like THEY did to MY PEOPLE in JAPAN. JAPAN Surrendered after the 2nd A BOMB. YOU Can Bring PUTIN to HIS KNEES without GOD’S Help. From SamuraiQueen. 😄😄😄😇😇😇