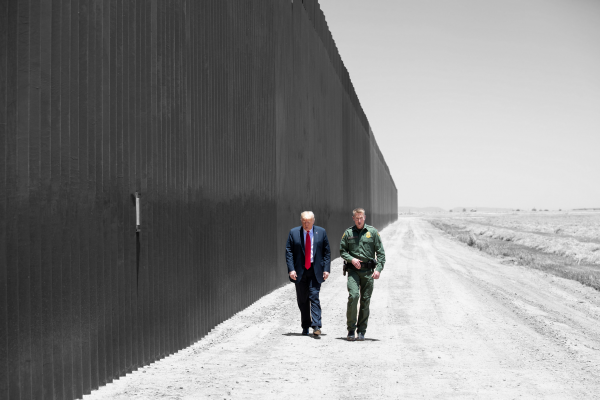 Voter skepticism of politicians remains high, according to a new survey released Friday yet President Donald J. Trump gets high marks for keeping the promises he made in his first run for the White House. According to a new Rasmussen Reports poll, nearly half of all voters believe he “has delivered more than most” on the pledges he made in 2016.

The survey, conducted by telephone and online, found general disappointment widespread with elected officials when it came to them doing what they said they would do when running for office. Just 16 percent of those surveyed viewed successful candidates as promise keepers while a whopping 70 percent said they were not with the remaining 14 percent undecided on the question.


Rasmussen Reports called the results “a noticeable improvement” over voters’ response to the question in previous years. In November 2009, the first year the question was posed, only 4 percent of those surveyed said winning politicians “kept their campaign promises.”

Trump fares better than most in this latest poll. Of the voters who participated, 45 percent said they believed he “has kept his campaign promise more than most presidents,” up from 38 percent in a March 2018 survey.

Unsurprisingly, Democrats were more critical of Trump than Republicans, with 66 percent saying Trump had kept his promises “less than most presidents” while 68 percent of Republicans said he’d kept them more. Nearly half of the unaffiliated voters in the survey, 47 percent, sided with the GOP.

Overall, Democrats are “a lot more likely” than either Republicans or independents to believe politicians follow through on their campaign commitments after they are elected. Just 14 percent of those in the GOP and 9 percent of unaffiliated voters believe most politicians can be counted on to govern on the platform they ran on compared to 23 percent of Democrats who agreed with the statement.

The lack of confidence the American electorate has in Washington is probably explained to a considerable degree by these numbers. Neither party finds the political class trustworthy.

The results should be a boon for Trump who, according to every recent national survey, is trailing Joe Biden by as much as double-digits in their battle for the presidency. In his speech accepting his party’s nomination Thursday night, the former vice president seems to say repeatedly he wanted voters to base their vote on how they felt about the character of the men running for the nation’s highest office.

In a contest of competence versus character, a theme likely to underscore the GOP fall campaign, Trump may have a narrow lead. Among voters who think most politicians don’t keep their campaign promises, 48 percent said “Trump is doing better than most presidents” while 38 percent disagreed.

The best American President ever in the history of America Mr Trump. Hopefully he gets next 4 years, TRUMP 2020

Oh, so E-Verify is now law with stiff penalties if violated? And annual legal immigration rates are lawfully bound not to exceed 100,000? No!!!!!!!!!!!!
The most typical American President of late. A liar about reforming the most destructive policies to the US, IMMIGRATION! Like his most recent predecessors, Trump is bent on destroying the US.

Trump has faced unprecedented opposition by the corrupt Leftist
Democrat Establishment Elite, RINOs, Deep State, and still (at least partially) delivered on all his promises.

Give him another 4 years with the backing of a majority of MAGA supporters in all levels of Government and we will enjoy the greatest prosperity the World has ever known.

Obama was better! Dripping with sarcasm!

wow what planet are you on, blacks for Trump we need you more then ever .

To Richard I’m at a loss how to answer your BS statement. You are obviously a watcher of CNN or MSNBC or some other anti Trump or never Trumper information propaganda crap and lie place. People like you never change your tune no matter how much truth I can give you. I will just advise you to try searching for the truth somewhere other than where you have been looking.

Idiocy and ignorance are incapable of “looking”…Fortunately, due to the obvious malice and calumny of the corrupt MSM, except for those severely stricken with TDS, more “dormant” brain cells are being awakened to the perils of a win by the “establishment”…Hopefully enough so that the DNC will be obliterated in November…

Please tell us how you think our great President Trump is hell bent on destroying the US. If Socialist DemoRats would work with instead of against him, the US would be running like a well oiled machine. But no, all they do is try to dig up dirt that isn’t there and are doing absolutely nothing to make out country and its citizens safe and prosperous. President Trump doesn’t even take his salary. He donates it. Now, please answer my question that is in the first sentence.

What galaxy are from, and what planet do you live on?

He along with the Democrats are living in a fantasy of their own making validated by the fake MSM & social media companies. People like Richard mimic Biden in that he pokes his head out from time to time,takes his fingure puts it in his mouth, holds it in the air and then determins his next sound bite.

I am amazed that Trump actually has tried to keep all his promises.

The only promise the Obomination tried to keep was to “Fundamentally Change America” for the worst.