With Trump’s Border Wall Going up, US Troops on Mexican Border Going Down 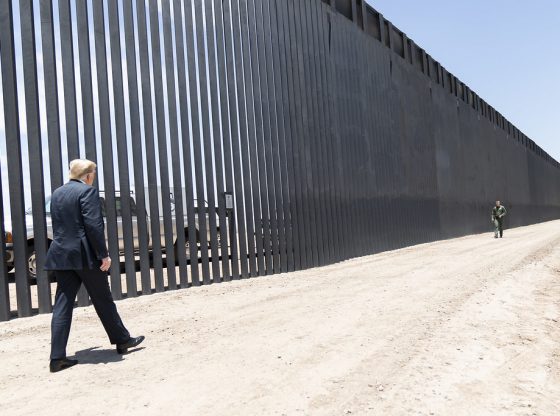 Almost three years ago, President Trump ordered the Pentagon to provide military support to the U.S. Customs and Border Protection on the U.S. southern border with Mexico. In addition to providing Defense Department funds to build the border wall, the Pentagon mobilized and deployed more than 5,000 active duty, reserve, and National Guard troops as well.

The move was highly controversial at the time, with partisan critics and activists bemoaning the “militarization” of the border. Under pressure from Congress, the Pentagon’s Inspector General (IG) was tasked with conducting a review of Trump’s military border support.


The Defense Department’s IG confirmed in its report that the Pentagon’s mobilization of thousands of troops to the U.S.-Mexico border is fully legal. Military Times (MT) noted that: “In providing aviation support, installing concertina wire and staffing mobile surveillance sites, the IG found, the troops are fully compliant with federal law and DoD policy.”

“Additionally, we determined that DoD title 10 personnel had limited contact with civilians or migrants and contact that did occur was acceptable under DoD policy,” noted the IG report, which surveyed troops from October 2018 to December 2019.

But as the funds have been disbursed, and the wall has been built the troops are drawing down.

The drop in numbers of troops at the border has coincided with what is expected to be the end of the Pentagon’s funding contributions to building the border wall.

The Defense Department in February shifted $3.8 bill from its acquisitions budget, clarifying that the more than $10 billion it chipped in for border barriers through 2019 and 2020 should be enough, along with Homeland Security Department funding, to complete the originally planned 722 miles of fencing.

MT added: “So far, the Army Corps of Engineers has awarded roughly $9 billion in contracts to build more than 380 miles of wall in California, Arizona, New Mexico and Texas.”

It also noted that troops “deployed to the U.S.-Mexico border started to draw down in the second half of 2020, and that trend is expected to continue for 2021.” The number is now about a third less than initially with only 3,600 National Guard and reserve troops now stationed at the border.

Bob Salesses, the deputy assistant defense secretary for homeland defense integration, said, according to Military Times, “I don’t have anything specific, but it’s clear that we’ll be meeting the requirements that have been identified by the president to accelerate and build the border barrier as quickly and effectively as possible.”

As the wall keeps going up, and U.S. troops along the border keep coming down, we see another Trump promise kept, less illegal entry, more security, and border crises averted.

God help us if Biden becomes our president.

You’ll see the president of Mexico standing next to that wall, saying “Mr. Biden, tear down this wall!”
And the wall comes tumbling down….

Our wall is meant to keep invaders out, not citizens in.

I am very proud of this President. He makes a promise and keeps in like the democrats who lie all the time. I give you Biden statement that he finished at the top of his class in law school when records show he finished at the bottom of his class. How can you trust someone who cannot tell the truth about his performance in college?

You can’t. Biden & the Democrats don’t tell the truth about anything!

I have to disagree. they tell the truth when they say they are going to do something that is detrimental to the nation or American citizens.

Q: What do you call a medical student who graduates last in the class?
A: Doctor

Never agreed with this Mexican border deal. But President Trump has achieved so much good during his administration. I personally feel the real enemy is much closer to home than some poor underfed and persecuted Mexicans. Democrats, BLM, Antifa, the list goes on. Even if that cheating POS Biden gets into the White House, dont worry, Trumps legacy will never die.

Do you know how many lives have been saved by getting rid of Drug Cartels and rapists and human traffickers?