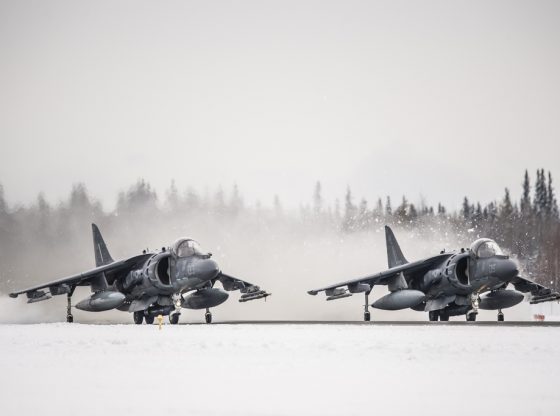 While not necessarily a direct response to the recent joint Chinese-Russian bomber patrol in the Pacific, the U.S. Air Force (USAF) just performed a massive ‘Elephant Walk‘ on Friday of 30 fighter jets and two aerial refueling tankers at Eielson Air Force Base, located just 110 miles south of the Arctic Circle.

The combat readiness exercise tested the rapid response ability of every aircraft at the base. It was also done on the same day the base stood up a second squadron of F-35As.

The Pentagon is increasingly using these types of shows of force, as both China and Russia become more aggressive in intimidating U.S, allies, and friends. It is also a show of U.S. resolve and capability to protect the increasingly critical Arctic region.

In addition to the joint Chinese-Russian bomber patrol, Russian recently deployed MiG-31 Foxhound long-range interceptor jets to their base in Anadyr, in the Chukotka region, directly opposite Alaska.

In this ‘Elephant Walk,’ 18 USAF F-35A Lightning II stealth fighters, 12 F-16C Fighting Falcon fighters, and two KC-135 Stratotankers aerial refuelers of the Alaska Air National Guard (ANG) were all pictured on the tarmac ready for takeoff. The display showed off the full lethal force of the 354th Fighter Wing and the ANG’s 168th Wing at the base, combined.

The ‘Elephant Walk’ involves a procession of aircraft taxiing in close formation right before a ‘minimum interval takeoff’ to test how quickly the fighters can take off under realistic conditions.

But is also a confidence booster for the airmen and women involved, and a show of American commitment to defend the region. Air Force Col. David Skalicky, 354th Operations Group commander said, as quoted in the Daily Mail:

The Elephant Walk isn’t only to practice our abilities to respond quickly. This is to show our Airmen who work behind the scenes what Eielson AFB is about, it’s about showing our strength in the arctic arena.

We are executing this despite Coronavirus, despite the extreme weather conditions, and despite that it’s one of the shortest days of the year.

Every Airman across the Fighter Wing contributed to today’s event, and we proved what our team is capable of…supporting, defending, or delivering 5th generation airpower and advanced training. Stay tuned, because our combat capability will continue to grow.

The Arctic is the next arena of great military power competition, and Russia has built up a lot more infrastructure on its side, said Republican Senator Dan Sullivan of Alaska to AlaskaPublic.org, according to the Daily Mail. Sullivan added:

Without further investment in our polar capabilities, our adversaries’ influence will grow. And if that happens, we risk our ability to protect U.S. vessels conducting commerce, to enforce international law, and to defeat threats to our national security.

Why are you using marine/navy AV-8b Harrier jets in an article about the Air Force’s air superiority?