Five Little Known Facts About the Battle of the Bulge 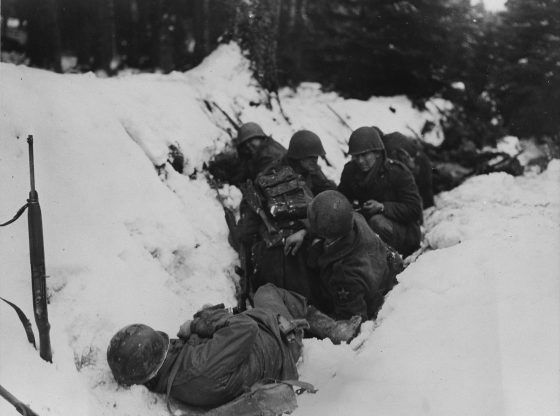 By 1944, Nazi Germany’s thousand-year Reich was in its death throes. Still, Adolf Hitler hoped for deliverance in the form of a last-ditch offensive through the forested Ardennes to split the Western Allies as his armies had done four-and-a-half years before. By this time, total victory was impossible. But the Führer believed he could force the war-weary British and cautious Americans to the negotiating table and redirect the entirety of the 10 million-man strong German Army (Wehrmacht) to repelling the Bolshevik menace in the East that threatened Germany with total annihilation. It was a desperate gamble that turned into the largest battle in American military history. And it could have had a far different outcome. Here are five little known facts about the Battle of the Bulge:

When the Bastogne soldiers were saved by Patton, one of them got a love letter from IRS. It seems he owed $25.75 in his taxes from the previous year and they demanded payment or he could go to (a nice warm Leavenworth) prison. He scrambled some money together from Belgium, France, and England, had the envelope stamped “Bastogne” and sent it in. He never heard another word from IRS. He also had sardines and saltines in a freezing cold foxhole for Christmas. Thanks to the Battered, Bloody, Bastards of Bastogne, Belgium we enjoy the freedoms we enjoy today.

You are totally wrong about our reluctance to take prisoners. We spent exhausting and dangerous times behind German lines in an attempt to keep track of opposing forces and seeking prisoners to interrogate. And it was COLD. Sometimes we found them willing to show themselves by firing on us, but often we lost them and so informed our people. The unwillingness of SHAEF to acknowledge or act upon such info was the problem. The Germans had prepared well , except for all the U.S. POW’s (my cousin included) and the stubbornness of the 101st and the speed of Patton’s 3rd.
Our KIA in the Bulge almost equaled the total number of KIA experienced by the Marines in every single one of their island invasions. Very bad, but like the Tet offensive which we won and the Press lost for us it could have turned the tide I was a member of an MIS team and(the Army having taught me to speak German) in the front jeep on every security and reconnaissance patrol by the Battalion to which we were attached so I speak with knowledge.

You, it’s you! You are the guy that we can thank for having that banner with the stripes and spangled with stars yet waving. God Bless you, Warren, thank you for your service, is too small a thing to say. I hope that last 76 years have been good to you, and I pray the remaining years God gives you are wonderful.

Yes!!! God Bless You Warren, I thank you for your service and hope and pray you have had & will continue to have a peaceful and great remainder of life!!!!!!!!!!!!!!