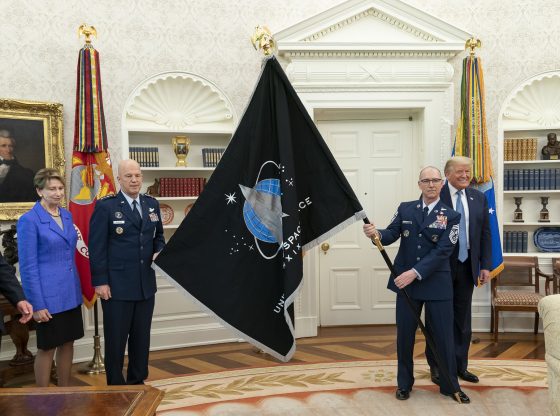 Despite the instinct to simply reverse everything done by President Trump, a potential Biden administration would be wise to preserve one of Trump’s signature achievements – Space Force. The sixth and latest military service created by Trump last year will have its first birthday on December 20.

The Heritage Foundation’s national security expert Jim Carafano told the Washington Examiner that Trump’s Space Force was “just the first out of the box,” with a dedicated extraterrestrial entity to protect space assets and conduct space operations.


Other nations are now following, with partners and allies such as the United Kingdom, Canada, Australia, and soon, Japan, creating or planning to set up similar entities.

Many former critics are also finally coming around to the idea that having a dedicated Space Force makes strategic sense. Team Biden should also see that American security will be best served by keeping and strengthening the U.S. Space Force.

Michael O’Hanlon, at the Brookings Institution, and a former detractor, says that since its creation in 2019 the Space Force has developed broad bipartisan support, and the defense think tank community is coming around to the value of a dedicated force for the space domain, notes the Washington Examiner.

However, adds O’Hanlon, the force’s relative infancy could make it easier for Team Biden to unwind:

You just established the Space Force. People who used to be U.S. Air Force put on a different patch, and they become U.S. Air Force again. It hasn’t been around long enough to really become something as independent as what the U.S. Air Force became.

But unwinding Space Force would be a very bad idea.

Brig. Gen. Douglas A. Schiess, wing commander of the 45th Space Wing at Patrick Air Force Base in Cape Canaveral, Florida, told the Washington Examiner that the creation of the Space Force has already shown benefits:

Still, it isn’t just Congress, space warfighters, and the DC think tank community that are seeing the benefits of a dedicated Space Force, “the commercial space industry, which has taken on an outsize role in delivering Space Force payloads into orbit, is banking on the continuation of the service,” writes the Examiner.

United Launch Alliance Director and General Manager of Launch Operations, Tony Taliancich, told the Washington Examiner that Space Force will allow the U.S., over the next several decades, to be better positioned to confront threats and opportunities related to space, adding:

The creation and the movement towards a Space Force kind of recognizes the road that we’re going towards. A more space-dominant future or space-critical future for all of us from a global standpoint.

The only drawback to Biden being involved with our space force if he gets into the white house is he would use it to further his socialism agenda. JUST SAYING HE HAS THE MIND SET GOR SOMETHING THST DEVIOUS.