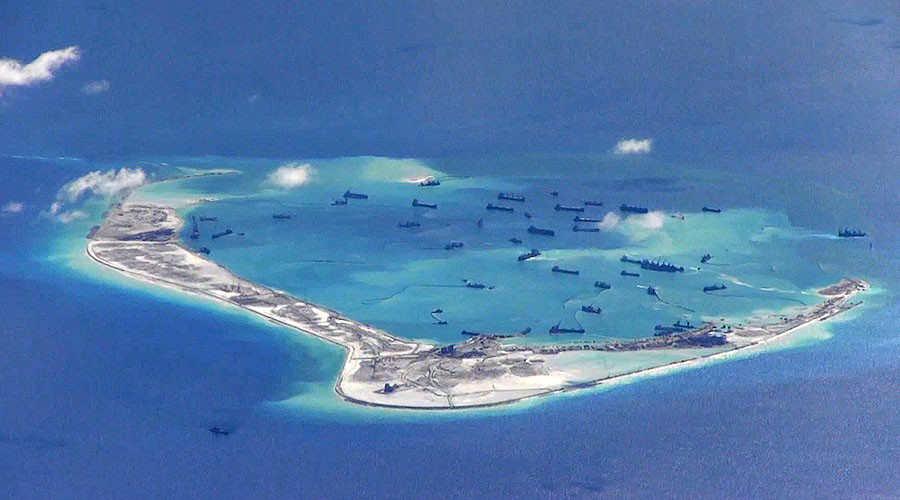 China’s rapidly constructed man-made island bases in the South China Sea appear to be collapsing and sinking due to shoddy construction and weather conditions.


Intended to give China effective, albeit illegal, control over large areas of ocean in strategically located contested or international waters, these artificial islands have been a flash-point for potential conflict with the U.S. and neighboring countries. But now they seem to be sinking.

As noted by The National Interest, “the Chinese government has dredged and mostly destroyed ecologically delicate reefs in disputed waters,” beginning in 2013, “in order to build seven major military bases complete with ports, airstrips and radar and missile installations.”

China’s dredging and construction came at a huge environmental cost, destroying much of the delicate reefs and surrounding sea life.

But to the Chinese Communist Party (CCP), the new bases were worth the environmental cost. As The Economist explains, the bases “allow China to control the entirety of the South China Sea in any scenario short of all-out war with the United States,”

These man-made bases have sparked tensions with neighboring countries such as Vietnam and the Philippines who also have claims in the area. Meanwhile, the US Navy has been increasing its Freedom of Navigation Operations (FONOPS) in and around these artificial islands to maintain its right to sail in international waters.

In the event of war between the United States and China, these military outposts in the western Pacific would likely be key initial targets for U.S. strikes.

However, The Economist added. “Rumors suggest the new islands’ concrete is crumbling and their foundations turning to sponge in a hostile climate. And that is before considering what a direct hit from a super-typhoon might do.”

But, as The National Interest points out, “The island bases’ uncertain future hasn’t deterred China from heaping additional capabilities on their potentially fragile infrastructure.” To counter low flying threats to these outposts, a surveillance blimp for the first time appeared on Mischief Reef in November 2019.

As China continues to build additional military and surveillance capabilities on these islands, the question now may be – will the U.S. need to destroy them in a war, or will they self-destruct on their own before then?

To me this is VERY funny. The sea and the undercurrents are more powerful than the little chinese politburo members. The VERY BAD construction materials that the chinese export to the US, in order for the US buildings fail, are just as bad and are not strong enough to resist Nature. Beaches everywhere are destroyed because of currents. They need to be refilled with sand. From Brittany, France, to Dubai, UAE, to South Carolina, Folly Beach, there are thousands of beaches in those precarious situations. The world destructors get the treatment they want to inflict the rest of the world. AMAZING. Thank GOD. Those GODless people deserve what they get.

Amen! I love how God confounds the ‘wisdom’ of the world especially with enemies such as this one. Too sweet for words.