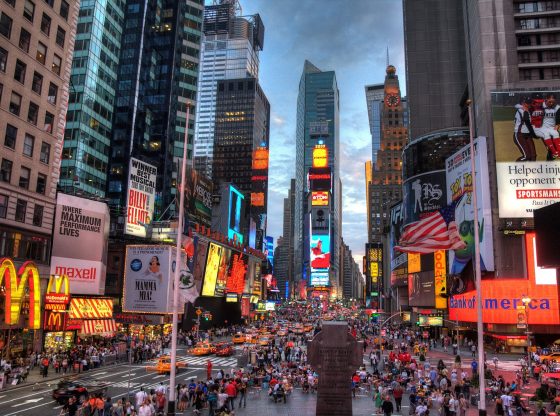 A 21-year-old Marine was hit in the back by a stray bullet while walking in New York City’s famous Times Square on Sunday afternoon while walking with his family.

The Marine, Samuel Poulin, was apparently an innocent bystander and the gunfire appeared to have originated from a dispute between a group of cd vendors.


As The Daily Mail reports:

Samuel Poulin, 21, a US Marine, was walking with his family at the time when he was struck by a bullet at around 5:15pm. He is believed to have been a completely innocent bystander who was visiting the city from Northville, upstate New York, to attend a baptism.

A group of five or six CD vendors were arguing under the Marriott Marquis sign on West 45th Street, according to police, when one pulled out a gun and fired a shot.

The victim’s wounds are not considered life-threatening but tourists in the vicinity were said to be shocked and frightened by what had unfolded before them.

A small group of people watched as crime scene tape was erected about the area with one police officer telling a tourist that it wasn’t ‘a show’, and that someone had been shot.

The shooting in one of New York’s most iconic tourist destinations highlights the stark toll rising crime is taking on the once prospoerous city.

World Famous Author Rips Woke University Over Insane Demand to Ban Words Like ‘Picnic’
Did the FBI ‘Instigate’ the Capitol Riot? – Not Likely – But Questions Remain

There will be lots more of this so better get used to it!

In our city, we call this Friday Night.

We call it, blacks settling a disagreement peacefully!!

Along with their defund the police and the corrupt & inactive mayor and corrupt governor.