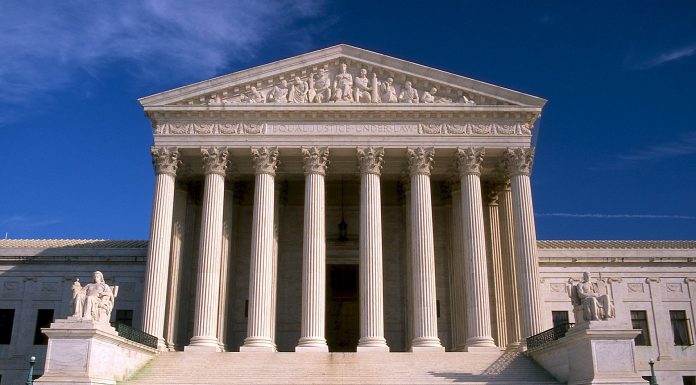 In a 7-2 decision, the Supreme Court ruled minutes ago that the Trump administration can deport some foreigners seeking asylum without giving them the opportunity to contest their claim before a judge.

The ruling applies to asylum seekers who fail the initial screening. Justices Elena Kagan and Sonia Sotomayor were the Court’s two dissenters.

In a win for the Department of Homeland Security, the Supreme Court said that a Sri Lankan farmer who lost his bid for asylum in the US after immigration officials ordered his removal could not challenge that decision in federal court. https://t.co/Vzim0wL4pw

The ruling is also a win for President Trump, who recently expressed frustration with the conservative-leaning Supreme Court’s decisions.

Michael Brigham
Michael Brigham has written for American Action News since the summer of 2019. His areas of expertise include foreign affairs, government, and politics, but regardless of the subject matter, he has a nose and an insatiable appetite for news. In his free time, he enjoys reading nonfiction, watching a mix of comedies and true crime documentaries, and spending time away from the swamp hiking in the foothills of the Appalachian Mountains.

A staggering death toll! Coronavirus disease 2019 (COVID-19) has cost the lives of at least 154,333 Americans. We know the disease caused by this coronavirus is...
Read more
Government

A challenge by several prominent environmental groups to halt the construction of President Donald Trump's border wall has been defeated by the Supreme Court. The...
Read more

Good, now get rid of them so that idiot in Calif. doesn’t give them checks.

You must be talking about our [great–tongue in cheek,] Gov. Newsom. State is 55 Billion in the hole. This idiot wants to give more taxpayer dollars to illegal aliens. I heard about $75Million. That’s Ca. ruled by liberal “think.”

My last month’s online job to earn extra dollars every month just by doing work for maximum 2 to 3 hrs a day. I have. joined this job about 3 months ago and in my first month i have made $12k+ easily without any special online experience. Everybody on this earth can get this job today and start making cash online by just follow details on this website………
HERE══════►►►www.earningscoop.com

In truth, we have one hope.
Pray.
The fervent prayer of a righteous man availeth much.
And right now, we need God to remove not only evil immigrants from our nation. We need Him to remove bad judges from our SCOTUS. Yes, I believe God can do it.

Not just a win for homeland security but for America and the American people. We welcome legal immigrants. You come here illegally or overstay any visa you are illegal and need to be removed. We already have too many homegrown terrorist and criminals, we don’t need illegals adding to our problems.
Leftist that want illegals here need to go with the illegals to their countries of origin, and take care of them there.

Fully agree Terry. And let’s send Kagan and Sotomayor
off with them. Our nation has enough local freeloaders without adding the non-citizen, non-contributing category onto the Treasury payout.

So totally agree! We need all hands on deck, just to clean up the mess that Obama allowed into our country!

You can stay if you are legally here, we do not want people here that are illegal.
They must following the rules like the people that are here legally

that included people who are here illegally and married to a legal citizen of USA. If they are illegal they and there children must go Any US citizen needs to have a ss card No illegal ss card will be allowed

I can think of an congresswomen,elected by Wisconsin, that needs to be deported-NOW.

Amen! She has spit in the face of Americans enough.. Needs to take her husband, brother and her smart mouthed Kids.
God Bless President! God Bless America!!!!

That is the other Congress woman elected from Minn. I think you are talking about. They both are in same boat and need to go home.

Jean–correction–MINNIEHOPELESS not the Honey Badger State!!

Too many RINO and liberals and Roberts is now a liberal judge. Therefore nothing will be done against the illegals.

Gee, I wonder why the only dissents were the 2 Hispanic women? I am sure this was not a personal political action by them but based on our legitimate laws from 1996. These 2 sought o ignore the law by claiming they had the same rights as our citizens regardless of how unlawfully the came in. In this case the litigant claimed he had been beaten in his home country but not persecuted by government or organize groups.

Consider the children’s story THE LITTLE RED HEN.
The farm animals were all too busy to help the red hen prepare for bread. But once the bread was baked they all lined up to get their free share. (short summary). Many “foreigners” label the USA as evil yet note the thousands trying to get “IN”. One would logically deduce that if America is so bad then everyone would want to leave. Recall East Germany under communist rule!

Illegals should be deported along with anchor babies, their mothers, and their fathers. And please untie President Trump’s hands. Build the wall, keep them in mexico for good.

Deport all illegals along with their anchor babies, their mothers, and their fathers. Untie President Trumps hands, build the wall, and keep illegals in mexico where they belong.

I am think Justice Roberts did this to throw Trump a Bone and wanting to knock him off Balance by voting in favor (he was outnumbered by 5 others) . Robetts is clearly a Leftist Justice but is not leading the court he is just joining the activist leftists wherever a swing vote is needed.

If it was a bone That the USSC threw Trump and the American people, let’s take it and be very appreciative and act with a swift sword by moving these out as if a tornado lifted them out and threw them out. Do it all before November.

Now he needs to reshape the FCC so they can enforce fairness in communications throughout the country. In case you have not noticed there is a lot of censorship, suppression, and falsely manufactured stories (lies) being pushed byn them as if they were the truth. Freedom of the Press is not the right to lie and try to manipulate public opinion with false stories.

Well, they got this one right. They are just glorified lawyers, and it really shows…

The U.S. government can, at least partially, control entrance by foreigners into The U.S. Amazing, absolutely amazing.

If I broke any law I would be tried and sentenced according to the law. Why is that all our representatives are biased toward American citizens? Illegal means that some law was broken. If this is true then why don’t the ICE group do a sweep and put these law breakers on a plane back to wherever these illegals came from. I lived in a foreign country that did exactly that. When the police checked your papers and found you ere incountry illegally they took you to a holding area, without your belongings, children, spouse, whomever was in your family that wasn’t with you, and when they had enough for a plane load you were put on that plane. That was a swift way to end the problem of illegals draining their country’s social services. Sounds crude but these people broke the law and suffered the consequences as they should.