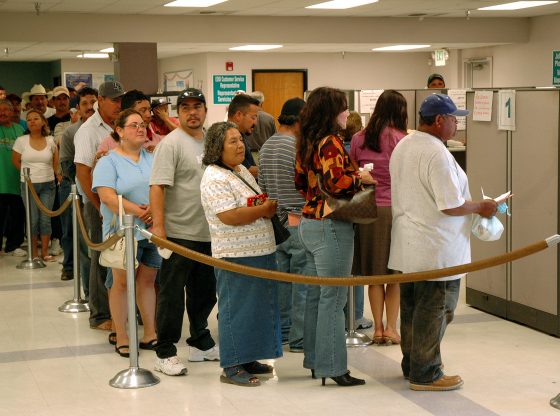 The most recent measure of the rate of US unemployment surprised many observers by shooting up, underlying fears that the Biden economy may not be doing as well as first thought.

The most recent Department of Labor data revealed 419,000 claims for the week ending on July 17 — an increase in 51,000 from the previous week’s levels that again exceeds economists’ predictions.

Unemployment data released over the past several months by the Department of Labor has revealed an uneven job market recovery. Despite the American economy’s rebound from COVID-19 and the lockdown-induced recession, workers have been slow to return to their positions.

The Daily Wire reported, for instance, that the week ending on July 3 saw 373,000 first-time jobless claims — a figure that outpaced the 350,000 claims forecasted by economists surveyed by Dow Jones. The week ending on June 12 saw 412,000 claims, representing an increase of 37,000 from the previous week’s levels.

Many experts — including economists at the Federal Reserve — point to enhanced federal unemployment benefits as a factor distorting the labor market.

In spite of the bizarre labor market, lawmakers have still not moved to attempt to curtail the excessive jobless benefits.

POLL: Who is the Most Dangerous Dem Who Must be Defeated?
AAN Daily Breakdown Thursday 22 July 2021

What’s the big surprise? When you pay people to be unemployed, you get more people unemployed!! DUH!!!!!

I was wondering about that. There’s also a factor omitted which might need research. You see in the photo several Hispanic people. Are they legally Americans, or are they illegal aliens collecting ‘unemployment’ benefits? (AKA, Liberal Vote Awards) If that photo was taken in California, you will have a devil of a time trying to determine who those people are.

I also think the new child tax credit payments, which don’t require work, make it financially viable for people to go out on unemployment rather than work.

David I believe that they are the paid voting block

The thing about unemployment is that it is still selective in who can receive it. I know a young mother of 2 who was bound by court order to take her two young children from Illinois to Florida for a 2 week visit with their deadbeat father; but her job refused her the time off to do so. Subsequently, she was fired from her job. She is not eligible for unemployment because she got fired. I was her babysitter who depended on the extra income to supplement my social security. I am not eligible for unemployment either, no reason given. Yet illegal immigrants and those receiving the extra benefits from unemployment are still able to draw in spite of the fact that they need to get off their butts and go to work. I for one do not have that luxury of finding a job because it would not only cut into my social security but I have other medical issues that excludes me from most jobs I could take. The young mother I referenced above is having a difficult time finding a job because she also lost her car to costly repairs and our community does not offer public transportation. So you’ll excuse me if I’m very bitter over this whole unemployment issue. Those who need it the most are being denied while illegal immigrants and those who sit home and reap the benefits from additional unemployment benefits while getting fat on taxpayer’s money is really sad to me.