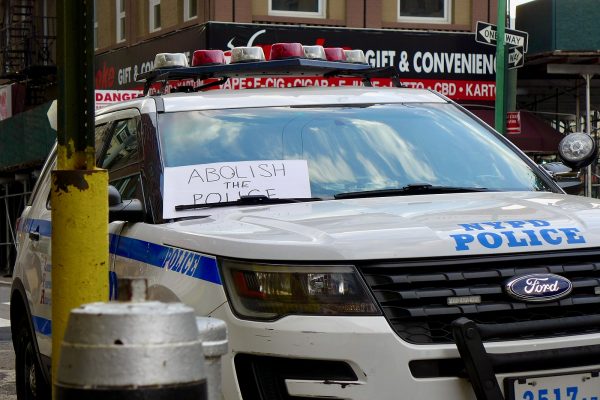 Washington, D.C. – The thin blue line keeping criminals and citizens apart is being stretched to the breaking point as more and more city governments are acceding to progressive demands that local police be “defunded” in the wake of the killing of George Floyd while in the custody of the Minneapolis police.

The movement spawned by the Floyd killing led to demonstrations and riots that paralyzed cities including Louisville, Ky., Seattle, Wash., and Portland, Ore., in the summer of 2020.


In some departments, groups of police officers have quit at the same time, fearing city officials would not back them up in times of crisis. A study featured in The Epoch Times conducted by the Washington-based Police Executive Research Forum found that from April 2020 to April 2021, police “retirements were up 45 percent and resignations rose by 18 percent” over the previous twelve months.

Across the nation, meanwhile, the number of attacks committed on law enforcement officials has increased, taking just six months in 2021 to surpass the total for the previous year.

The national Fraternal Order of Police said Thursday the number of attacks on police officials had already risen 91 percent from 2020, with 150 officers shot and 28 killed already in 2021. Alarmingly, that includes what the FOP said were 50 “ambush-style” attacks, which suggests progressive, anti-police rhetoric has made law enforcement officials targets for political action.

The 2020 Year-End Summary of Law Enforcement Officers Shot in the Line of Duty describes ambush-style attacks as those “carried out with an element of surprise and intended to deprive officers of the ability to defend against the attack.”

The demands that local police departments be “defunded” is clearly, a new Rasmussen Reports poll shows, outside the mainstream of American thinking. “Fewer than one in five voters think America should spend less on police,” the polling firm said, “and a majority want to spend more.”

According to its latest survey, 52 percent of likely U.S. Voters believed America must spend more on police while just 18 percent said less should be spent, which suggests the reality may be starting to hit home. The perception exists that the crime rate is rising and that the Democrats – President Joe Biden in particular – are responsible.

The recently released Washington Post-ABC News poll found only 38 percent of all Americans approved of the Biden Administration’s handling of crime. Nearly half, 48 percent, disapproved.  Politically, the Democrats’ failure to correct that impression could have profound repercussions in the November 2022 congressional elections, a sentiment echoed in a recent opinion piece written by former Massachusetts Gov. Michael Dukakis.

In 1988, Dukakis, the Democratic presidential nominee, blew a lead of as much as 17 points, losing the election to then-GOP Vice President George H.W. Bush, largely because Bush managed to convince voters his Democratic opponent was not only soft on crime but insensitive to its victims.

The tide may be turning, but slowly. The Minneapolis Star-Tribune reported Friday that a Hennepin County, Minnesota judge “has ordered Minneapolis leaders to keep the number of police officers at a level required in the city charter,” in what can only be described as a defeat for progressive activists who successfully pressured the city council and the mayor to cut the department’s funding. In doing so, Judge Jamie Anderson said, Minneapolis Mayor Jacob Frey and the City Council “failed to perform an official duty clearly imposed by law.”

While no police officer is above reproach and no police department is perfectly run, the data indicates the police are not the problem. The problem remains the various criminal elements who disrupt every facet of American life, particularly in the inner cities, with their violent, often lethal behavior. Unfortunately, no one has yet hit on a way to successfully defund them.

Peter Roff is a former U.S. News & World Report contributing editor now affiliated with several Washington, D.C. public policy organizations. He appears regularly as a commentator on the One America News network. Reach him by email at [email protected]. Follow him on Twitter @PeterRoff.

All the Most Amazing 4th of July Moments During the Trump Administration
WATCH LIVE: 45th President Donald Trump’s Rally in Sarasota, Florida

Public hangings would put a stop to this shit.

Henry VIII would have them drawn and quartered ALIVE.

Put fur on them and China would do the exact same thing!!!!

The push to defund police is fueled entirely by by mis representing arrests of criminals as arrestes of law abiding citizens. What needs to be exposed is the arrest recods and vicitims of the Floyd’s of this false movement. If they are allowed to continue unchallenged to present Floyed as a victim instead of as a criminal then you will not be able to diffuse the false claims driving the defund movement. Floyd attracted attention by breaking the law first (passing counterfeit money), then a second time by resisting arrest and lastly a third time by disposing of drugs (caught on video) while being arrested. It’s insane that this isn’t challenged by rational people on all sides…

He had Freemason tattoos on his chest. He nearly killed a pregnant lady (and her unborn baby) and had his thug friends steal from her apartment whilst he held a gun to her stomach. But President Trumps Accountant who is clean never harmed a fly is now having to lawyer up! They are very sick/evil people

There are no rational people on the left side.